Hospice in the United States is not a place, but a concept of care in which the end of life is viewed as a developmental stage.

Hospice in the United States is not a place, but a concept of care in which the end of life is viewed as a developmental stage. The root of the word hospice is hospes, meaning “host.” Historically, hospice has referred to a shelter or way station for weary travelers on a pilgrimage (Bennahum, 1996). In the years that followed Kübler-Ross’s groundbreaking work, the concept of hospice care as an alternative to depersonalized death in institutions began as a grassroots movement. Her work, and the development of the con-cept of hospice in England by Dr. Cicely Saunders, resulted in recognition of gaps in the existing system of care for the terminally ill (Amenta, 1986). Hospice care began in response to “noticeable gaps . . . (1) between treating the disease and treating the person, (2) between technological research and psycho-social support, and (3) between the general denial of the fact of death in our society and the acceptance of death by those who face it”. According to Saunders, who founded the world-renowned St. Christopher’s Hospice in London (Bennahum, 1996), the principles underlying hospice are as follows:

·        The patient’s total care is best managed by an interdisciplinary team whose members communicate regularly with each other.

·        Pain and other symptoms of terminal illness must be managed.

·        The patient and family should be viewed as a single unit of care.

·        Bereavement care must be provided to family members.

·        Research and education should be ongoing.

Hospice Care in the United States

Although the concept dates to ancient times, hospice as a way of caring for those at the end of life did not emerge in the United States until the 1960s (Hospice Association of America, 2001). The hospice movement in the United States is based on the be-lief that meaningful living is achievable during terminal illness, and that it is best supported in the home, free from technologi-cal interventions to prolong physiologic dying (Amenta, 1986). After the first U.S. hospice was founded in Connecticut in 1974, the concept quickly spread and the number of hospice programs in the United States has grown dramatically. In the years between 1984 and 1996, which followed the creation of the Medicare Hospice Benefit, there was a 70-fold increase in the number of hospices participating in Medicare (Hospice Association of America, 2001).

Despite more than 25 years of existence in the United States, hospice remains an option for end-of-life care that has not been fully integrated into mainstream health care. Although hospice care is available to persons with any life-limiting condition, it has primarily been used by patients with advanced cancer, where the disease staging and trajectory lend themselves to more reliableprediction about the end of life (Boling & Lynn, 1998; Christakis

Lamont, 2000). Many reasons have been proposed for the re-luctance of physicians to refer patients to hospice and the reluc-tance of patients to accept this form of care. These include the difficulties in making a terminal prognosis, the strong association of hospice with death, advances in “curative” treatment options in late-stage illness, and financial pressures on health care providers that may cause them to retain rather than refer hospice-eligible patients. The result is that patients who could benefit from the comprehensive, interdisciplinary support offered by hospice pro-grams frequently do not enter hospice care until their final days (or hours) of life (Christakis & Lamont, 2000).

Hospice is a coordinated program of interdisciplinary services provided by professional caregivers and trained volunteers to pa-tients with serious, progressive illnesses that are not responsive to cure. In hospice settings, the patient and family together are the unit of care. The goal of hospice care is to enable the patient to remain at home, surrounded by the people and objects that have been important to him or her throughout life. Hospice care does not seek to hasten death, nor does it encourage the prolongation of life through artificial means. Hospice care hinges on the com-petent patient’s full or “open” awareness of dying; it embraces a realism about death, such that the patient and family are assisted to understand the dying process and can live each moment as fully as possible.

Although most hospice care is provided in the patient’s own home, some hospice programs have developed inpatient facilities or residences where terminally ill patients without family support or those who desire inpatient care may receive hospice services.

Eligibility criteria for hospice vary depending on the hospice program, but generally patients must have a progressive, irre-versible illness and limited life expectancy and have opted for pal-liative care rather than cure-focused treatment. Although hospices have historically served cancer patients, patients with any life-limiting illness are eligible.

In 1983, the Medicare Hospice Benefit was implemented to cover hospice care for Medicare beneficiaries. State Medical Assistance (Medicaid) also provides coverage for hospice care, as do most com-mercial insurers. Federal reimbursement for hospice care ushered in a new era in hospice in which program standards developed and published by the federal government codified what had formerly been a grassroots, loosely organized and defined ideal for care at the end of life. To receive Medicare dollars for hospice services, pro-grams are required to comply with conditions of participation pro-mulgated by the Centers for Medicare and Medicaid Services. Medicare standards have come to largely define hospice philosophy and services. Eligibility criteria for hospice coverage under the Medicare Hospice Benefit are specified in Chart 17-1. Federal rules for hospices require that the patient’s continuing eligibility for hos-pice care is reviewed periodically. There is no limit to the length of time that an eligible patient may continue to receive hospice care. Patients who live longer than 6 months under hospice care are not discharged if their physician and the hospice medical direc-tor continue to certify that the patient is terminally ill with a life expectancy of 6 months or less, assuming that the disease con-tinues its expected course. The hospice certification and review process and the open-ended benefit structure are intended to ad-dress the difficulty physicians face in predicting how long a patient will live, so that patients are not restricted to a lifetime limit on the number of hospice days they may receive. 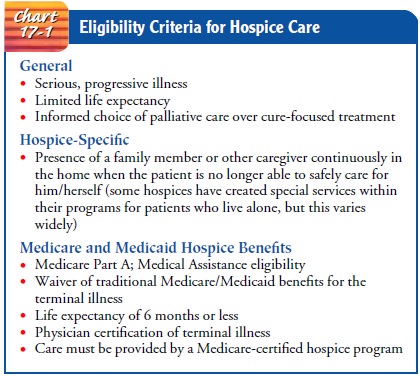 To use hospice benefits under Medicare or Medicaid, the pa-tient must meet eligibility criteria and “elect” to use the hospice benefit in place of traditional Medicare or Medicaid benefits for the terminal illness. Once the patient elects the benefit, the Medicare-certified hospice program assumes responsibility for providing and paying for the care and treatment related to the un-derlying illness for which hospice care was elected. The Medicare-certified hospice is paid a predetermined dollar amount for each day of hospice care each patient receives. Four levels of hospice care are covered under Medicare and Medicaid hospice benefits:

•          Routine home care: All services provided are included in the daily rate to the hospice.

•          Continuous care: Continuous nursing care provided in the home for management of a medical crisis. Care reverts to the routine home care level when the crisis is resolved. (For example, the patient develops seizure activity and a nurse is placed in the home continuously to monitor the patient and administer medications. After 72 hours the seizure activity is under control, the family has been instructed how to care for the patient, and the continuous nursing care is stopped.)

•          General inpatient care: Inpatient stay for symptom man-agement that cannot be provided in the home; not subject to the guidelines for a standard hospital inpatient stay.

Most hospice care is provided at the “routine home care” level and includes the services depicted in Chart 17-2. According to federal guidelines, hospices may provide no more than 20% of the aggregate annual patient days at the inpatient level. Patients may “revoke” their hospice benefits at any time, resuming tradi-tional coverage under Medicare or Medicaid for the terminal ill-ness. They may also re-elect their hospice benefits at a later time after reassessment for eligibility according to these criteria 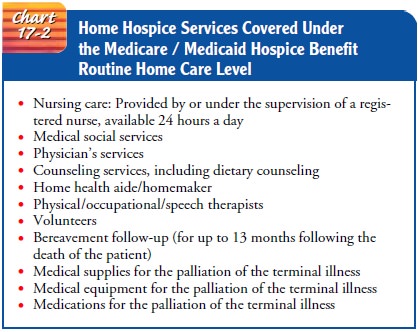