Initiation of DNA synthesis occurs at a site called origin of replication.

o     Initiation of DNA synthesis occurs at a site called origin of replication.

o     In prokaryotes, only one origin.

o     In eukaryotes, there are multiple origins.

o     The origin consists of a short sequence of A = T base pairs.

The two complementary strands of DNA separate at a site of replication to form a bubble. In eukaryotes many replication bubbles occur.

After the initiation point is located the unwinding of the DNA takes place once in every 10 nucleotide pairs. This allows the “strand separation”.

In prokaryotes the unwinding of the structure occurs with the help of an enzyme called helicase, which requires energy of hydrolysis of two ATP molecules per base pair broken. Another protein single strand binding protein (SSB), binds to the unwound DNA to prevent (rewinding) rejoining.

As the DNA polymerase cannot initiate replication a primer is a needed and the primer is the small nucleotide of RNA, synthesised by enzymes primase. 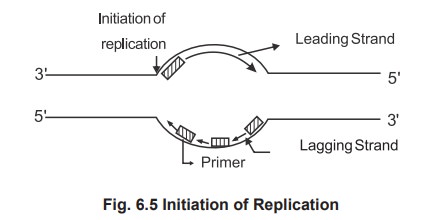 Under the influence of DNA polymerase, in the presence of Mg2+, the double strands of the DNA acting as a template (or primer) separate by cleaving the hydrogen bonds between complementary bases. The deoxyribo nucleoside triphosphates are attracted from solution in the cellular sap to form hydrogen bonds with their complementary bases on the separated strands of the (primer RNA) template dictates the sequence in which the monomers are assembled.

During this reaction, each incoming nucleotide loses a pyrophosphate group and forms an ester linkage with the 3' hydroxyl group of the deoxyribose on the existing last nucleotide. This linkage is called “phosphodiester linkage”.

The parental strands run in antiparallel direction. Synthesis occur simultaneously on both strands, but at different rates. No enzymes can synthesize 3' ® 5' direction and a single enzyme can not synthesize both strands. The single enzyme replicates one strand called leading strand in a continuous manner in 5' to 3' direction (forward), it replicates the other strand, lagging strand in a discontinuous manner and polymerising only few (250) nucleotides again run in 5' to 3' at backward direction. This is called semicontinuous DNA synthesis. The newly synthesized DNA is made as discontinuous small fragments called as Okazaki fragments and joined by the enzyme called ligase. 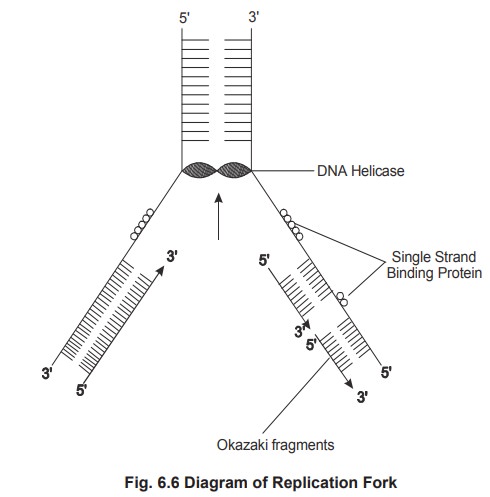 Thus 2 daughter double helices are formed each consisting of an old strand of the primer DNA and a complementary new strand. The final composition and nucleotide sequence of each strand is identical with the corresponding strand in the template (parent) DNA. This process has been named as replication.