The biosynthesis of RNA is very much similar to that of DNA, except that in RNA it is differed by having different RNA types (mRNA, tRNA, rRNA), and the nitrogen base uracil instead of thymine.

The biosynthesis of RNA is very much similar to that of DNA, except that in RNA it is differed by having different RNA types (mRNA, tRNA, rRNA), and the nitrogen base uracil instead of thymine. Like DNA, polymerization of 4 nucleoside triphosphates (viz ATP, CTP, GTP and UTP) in the presence of Mg2+ (or) Mn2+ ion is catalysed by the enzyme RNA polymerase and one strand of DNA serves as template.

In E. coli, all genes are transcribed by a single large RNA polymerase. This complex enzyme, called the holoenzyme is needed to initiate transcription since the factor is essential for recognition of the promoter. It is common for prokaryotes to have several s factors that recognize different types of promoter (in E.coli, the most common s factor is σ70).

The holoenzyme binds to a promoter region about 40-60 bp in size and then initiates transcription a short distance downstream (i.e. 3' to the promoter). With in the promoter lie two 6 bp sequences that are particularly important for promoter function and which are therefore highly conserved between species. Using the convention of calling the first nucleotide of a transcribed sequence as +1, there 2 promoter elements lie at position -10 and -35, that is about 10 and 35 bp respectively, downstream of where transcription will begin.

After transcription initiation, the s factor is released from the transcriptional complex to leave the core enzyme (α2ββ'ω) which continues elongation of the RNA transcript. Thus, the core enzyme contains the catalytic site for polymerisation, probably within the subunit. The first nucleotide in the RNA transcript is usually PPPG (or) PPPA. The RNA polymerase then synthesises the RNA in the 5' -> 3' direction, using the 4 ribonucleotide 5' triphosphates (ATP, CTP, GTP, UTP), as precursors. 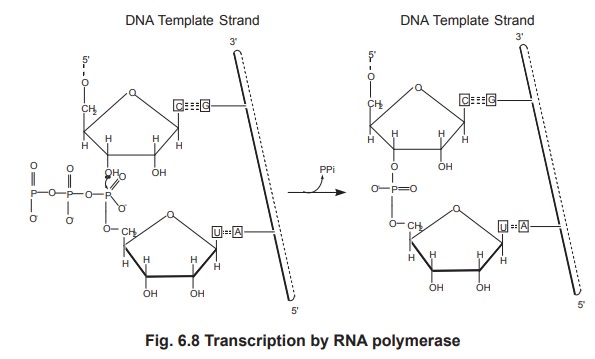 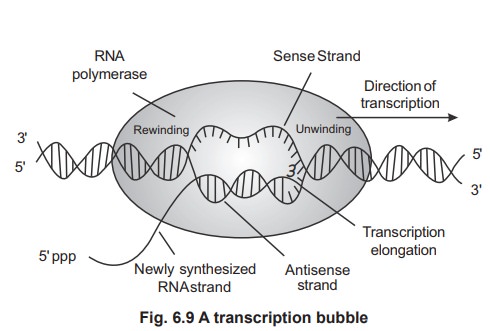 The DNA double helix is unwound and RNA polymerase then synthesizes an RNA copy of the DNA template strand. The nascent RNA transiently forms an RNA-DNA hybrid helix but then peels away from the DNA which is subsequently rewound into a helix once more.

Transcription continues until a termination sequence is reached. The most common termination signal is a G == C rich region is a palindrome, followed by an A = T rich sequence. The RNA made from the DNA palindrome is self complementary and so base pairs internally to form a hairpin structure rich in GC base pairs followed by four or more U residues (fig.6.10). However not all termination sites base this hairpin structure. Those that lack such a structure require an additional protein, called rho protein (r) to help recognize the termination site and stop transcription. 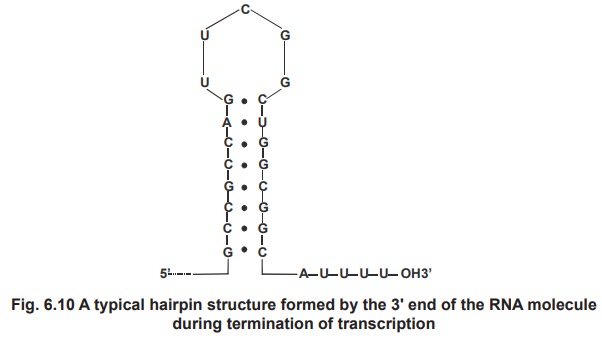 mRNA undergoes several modifications before it is being translated. They are

3.           Methylation occurs in the internal adenylate nucleotides at their N-6 position. It’s function is not known.Thus mRNA is processed to get the active mRNA molecule.

Most cells have 40 to 50 distinct tRNAs. Transfer RNA’s are derived from longer RNA precursors of enzymatic removal of extranucleotide units from the 5' and 3' ends.

1. Formation of the 3'-OH terminus

This process involves the action of an endonuclease that recognizes a hairpin loop at the 3' end called RNAse D, which stops two bases at short of CCA terminus, though it later removes these two bases after the 5' end is processed. This enzymatic digestion leaves the molecule called pre-tRNA.

The 5'-P terminus is formed by an enzyme called RNAse P, which removes excess RNA from the 5' end of a precursor molecule by an endonucleolytic cleavage that generates the correct 5' end.

The final modification is to produce the altered bases in the tRNA.

In tRNA, two uridines are converted to pseudo uridine (Ψ), one guanosine to methyl guanosine (MG), one adenine to isopentyladenine (IPA) etc. 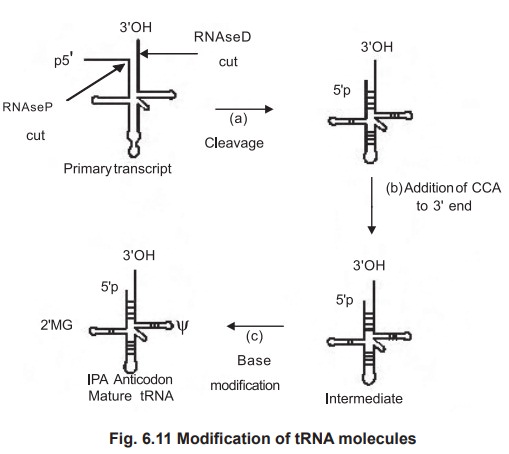 Role of tRNA in protein synthesis

Transfer RNA is the smallest polymeric RNA. These molecules seem to be generated by the nuclear processing of a precursor molecule.

The tRNA molecules serve a number of functions, the most important of which is to activate amino acids for protein synthesis. The function of tRNA is to bind the specific aminoacids, one might think that there are 20 types of tRNAs (i.e as many as the constituent amino acids of proteins). Since the code is degenerate (i.e. there is more than one codon for a aminoacid). There are also more than one tRNA for a specific aminoacid. Therefore there are generally several tRNAs specific for the same aminoacid (Sometimes upto 4 or 5); they are called isoacceptor tRNA’s. These various tRNA’s, capable of binding the same amino acid, differ in their nucleotide sequence, they can either have the same anticodon and therefore recognize the same codon (or) have different anticodons and thus permit the incorporation of the aminoacid in response to multiple codons specifying the same aminoacid.

As mentioned, each tRNA is specific for an aminoacid i.e. it can bind (or accept) only that particular aminoacid. Thus, tRNAAla denotes a tRNA specific for alanine.

Codon is made up of 3 bases, and is present in mRNA. The tRNA contains anticodon which is complementary (opposite) to codons in mRNA. 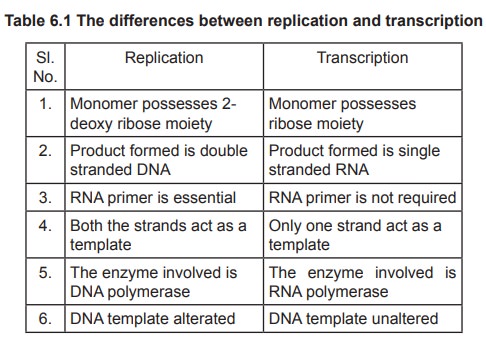