Are all mixtures used as they are? or is there a need for separating components? Materials we use in our day-to-day life are got from different sources and are very often combined with other substances.

Are all mixtures used as they are? or is there a need for separating components?

Materials we use in our day-to-day life are got from different sources and are very often combined with other substances.

Mixtures like coffee and ice cream are taken as such. There is no need for separation in these cases. Metals occur in the form of ores under the earth’s crust. But if we want to use a pure metal, we need to adopt a laborious process of extraction to separate the useful metal from the ore.

So what is meant by separation ?

The process by which the components of mixture are isolated and removed from each other to get pure substance is called separation.

When and why do we need to separate mixtures?

* when we need to remove impurities or harmful components from the mixtures (eg: stones from rice)

* when the useful component has to be separated from other components (eg: petrol from petroleum)

* when a substance has to be obtained in highly pure form (eg: gold from gold mines)

It is 7 am and Selvi’s family is busy. At home, in the kitchen, Selvi’s mother is making tea for the family and her grandmother is separating butter from curds. Her father and uncle are out in the fields collecting paddy after harvesting. Selvi is helping her mother in preparing to cook rice and is separating stones from the rice. Selvi’s little brother Balu is fascinated by a piece of magnet that he was given by his friend and is playing outside in the sand with it.

Can you list out in your note book, the different activities that Selvi’s family is engaged in? 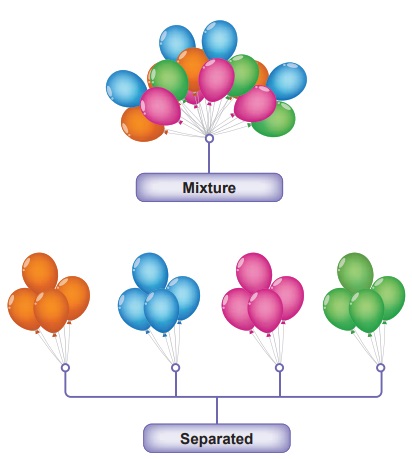 Let us explore the different separating methods involved in the above activities and also learn about a few other methods.

The choice of method of separation depends upon the properties of the components of the mixture. The separation method may be based on the particle’s size, shape or physical state – they may be solids, liquids or gases.

Will you discard the tea leaves after straining? Can you suggest a good way of using them?

A sieve is similar to a strainer. Sieving is used when we have to separate solid particles of different sizes. Eg: bran from flour, sand from gravel etc.

Think and find out!: Is it a good idea to separate bran from flour? Write your answer in your notebook 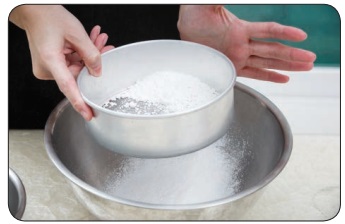 Answer: Yes, It is a good idea to separate bran from flour. 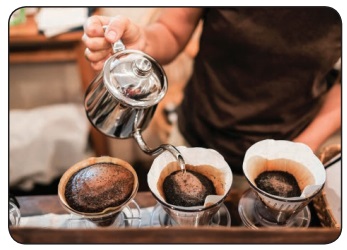 Wire mesh as a strainer sieve is used to separate gravel from sand at a construction site.

When very fine insoluble solids have to be separated from a liquid as in butter from curds, Churning is performed. The mixture is churned vigorously when solid butter will be collected on the sides of the vessel. Both butter and buttermilk are obtained after churning are useful and can be consumed.

In washing machines this principle is used to squeeze out dirt from clothes and the method is called centrifugation. 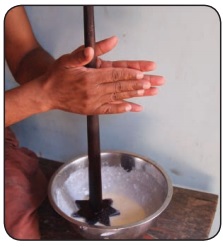 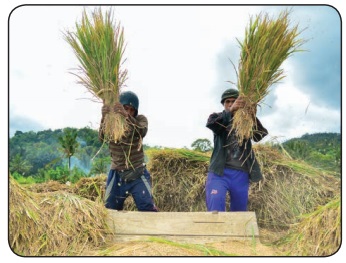 Have you seen how some farmers spread the dried grain stalks in the middle of the road? Heavy vehicles pass on them and the grains get separated from the stalks. Write down two merits and demerits of this practice.

Rice, wheat and other food grains are covered in husk which cannot be eaten by us. Husk is very light and gets easily blown away by a breeze or wind. This property is made use of in winnowing. This is done by dropping the mixture slowly from a height in the presence of wind. Lighter solids i.e. husks will be carried by wind and will be collected in a separate heap while heavier solids i.e. grains will fall closer and form a separate heap. 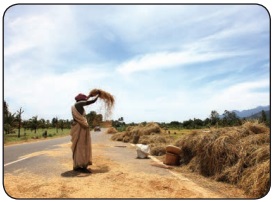 Rice husks are the hard protecting coverings of grains of rice. In addition to protecting rice during the growing season, husks can be used as building material, fertilizer, insulation material and fuel

If the rice that we cook has stones in it we have to pick the stones out.

How do we identify a stone from a grain of rice? If the stones are visibly very different from the grain, they can be easily picked and separated by hand. This is handpicking. But if the stones look very similar to the rice grains it is difficult to separate. 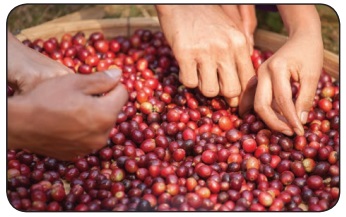 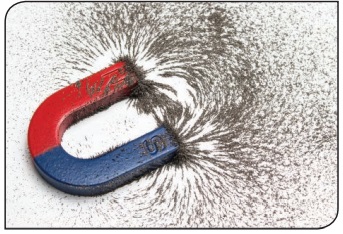 Rice and pulses are often mixed with very fine straw, husk or dust particles which have to be removed before cooking. Are you familiar with the way this is done at home? The rice or pulses are washed in water. The lighter impurities float while heavier rice grains sink to the bottom. This is called sedimentation. The water with the impurities is carefully poured away leaving clean rice at the bottom. This is called decantation.

SEPARATING MUD FROM MUDDY WATER: (can be demonstrated by the teacher)

Muddy water is a mixture of very fine particles of soil in water. What will happen to a beaker of muddy water if it is left undisturbed for some time? Mud being heavy will settle down at the bottom of the beaker and will form the sediment. Water will form the top layer and is called the supernatant liquid.

The settling down of heavier component of a mixture when allowed to remain undisturbed for some time is called sedimentation.

Decantation : This process is done after sedimentation. The supernatant liquid is slowly poured out from the container without disturbing the sediment. The part that has settled down is called sediment. The water that is obtained after decantation is called the decant ate.

The process of removal of water above the sediment is called decantation. But even after decantation the water is not completely free from fine soil particles. How can we remove this?  By  the process of filtration. Do you think a strainer or a cloth can filter theses very fine particles? Do it and see for yourself. 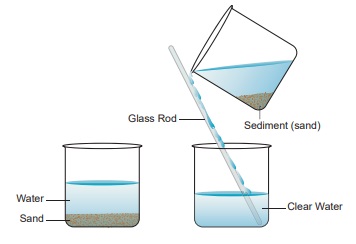 We will use filter papers to remove the finer impurities. A filter paper has very fine pores much smaller than soil particles. Let us see how to use the filter paper.

Take a piece of filter paper. Fold it to make a cone (see figure) 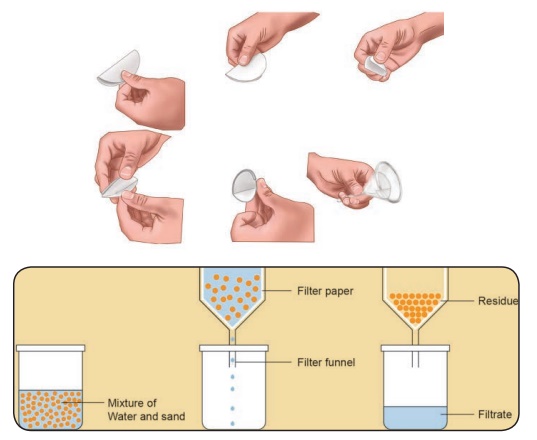 The method of separating insoluble component (sand, mud etc.) from a mixture using a filter paper is called filtration.

The liquid which passes through the filter and comes down is called filtrate and the insoluble component left behind on the filter is called residue.

Combination of methods are used sometimes for complete separation.

If the mixture of sand and salt in water has to be separated several steps will be involved: Sedimentation, decantation, filtration, evaporation and condensation.

Each group should suggest a method to separate mixtures and also give reasons why they used a particular method and what property of the components forms the basis for separation. Examples should be drawn from day-to-day life. After the group presents its method to the rest of the class, the whole class will discuss and analyse if the suggested method will work and then make a note of it in the form given below: 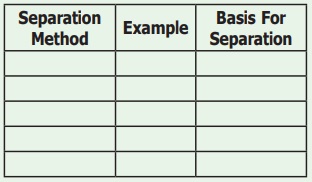