a. Coffee with milk

II. State whether the following statements are True or False. If false give the correct statement

a. Air is not compressible. [False]

b. Liquids have no fixed volume but have fixed shape. [False]

c. Particles in solids are free to move. [False]

Particles in solids are not free to move.

d. When pulses are washed with water before cooking, the water is separated from them by the pro-cess of filtration [True]

e. Strainer is a kind of sieve which is used to separate a liquid from solid [True]

f. Grain and husk can be separated by winnowing [True]

Air is a mixture of substances.

h. Butter from curds is separated by sedimentation. [False]

Butter from curds is separated by Churning.

III. a) Match the following 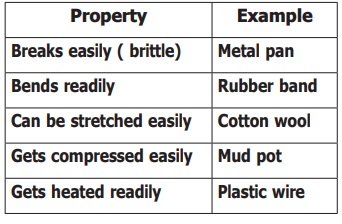 Can be stretched easily- Cotton wool

Can be stretched easily :  Rubber band

v.  Separation of solids from liquids- husk and paddy- Winnowing

(i) Separation of visible undesirable -  rice and stone  - Hand-picking

(v) Separation of solids from liquids   - Sand and water   - Filtration

IV) Fill in the blanks

1. Matter is made up of extremely small particles.

2. In solids, the space between the particles is less than in liquids and gases

3. Grains can be separated from their stalks by Winnowing.

4. Chillies are removed from ‘upma’ by Hand-picking method.

5. The method employed to separate clay particles from water is Decantation.

6. Among the following items: safety pins, pencil and rubber band, safety pins will get attracted to a magnet.

V. Complete the given analogy

Matter is anything that has mass and occupies space.

2. How can husk or fine dust particles be separated from rice before cooking?

Husk or fine dust particles be separated from rice before cooking by decantation.

The water with the impurities is carefully poured away leaving clean rice at the bottom.

This is called decantation.

3. Why do we separate mixtures?

We separate mixtures because

• to obtain the useful component

• to obtain a substance in a highly pure form.

4. Give an example for mixture and justify your answer with reason.

We have to separate this mixtures to get useful things.

1. Deduction of a foreign or inferior substance

1. Addition of a foreign or inferior substance

1. A rubber ball changes its shape on pressing. Can it be called a solid?

Answer: Yes, it is solid filled with air.

2. Why do gases not have fixed shape?

Answer: The particles in the gases are arranged far apart. They move freely. So gases not have fixed shape. Eg. Air

3. What method will you employ to separate cheese (paneer) from milk? Explain.

• We will use filter papers to remove waste milk.

• A filter paper has very fine pores much smaller than soil particles.

• The milk which passes through the filter.

4. Look at the picture given below and explain the method of separation illustrated. 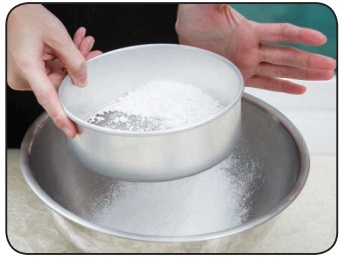 Answer: Sieving method is used to separate bran from flour.

Pocedure to separate bran from flour:

• We sieve to remove bran from flour.

• Slowly pour the flour over the sieve, and shake the sieve.

• The flour which passes through the sieve is seperated.

5. How can you separate a mixture of a large quantity of tiny bits of paper mixed with pulses / dal?

Answer: A mixture of a large quantity of tiny bits of paper mixed with pulses  / dalbe separated by decantation.

• The water with the impurities is carefully poured away leaving clean pulses /dal at the bottom. This is called decantation.

6. What is meant by food adulteration?

Answer: Things that we buy in the market are mixed with harmful and unwanted substances. This process is called adulteration.

7. Mr. Raghu returns home on a hot summer day and wants to have buttermilk. Mrs. Raghu has only curds. What can she do to get buttermilk? Explain

• take a small amount of cud in a container.

• mix water with curd in container and add pinch of salt.

• now the butter milk is ready. 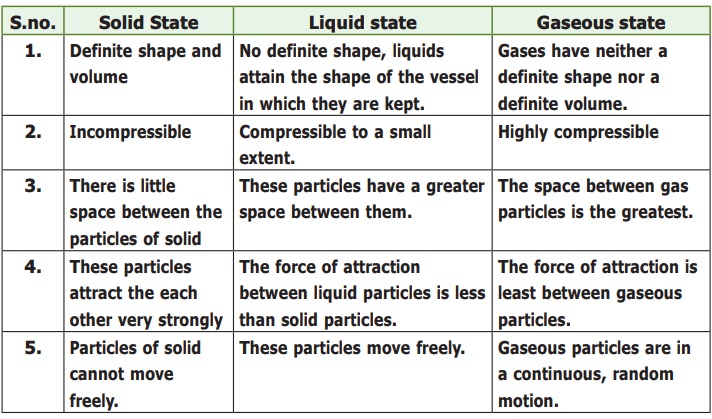 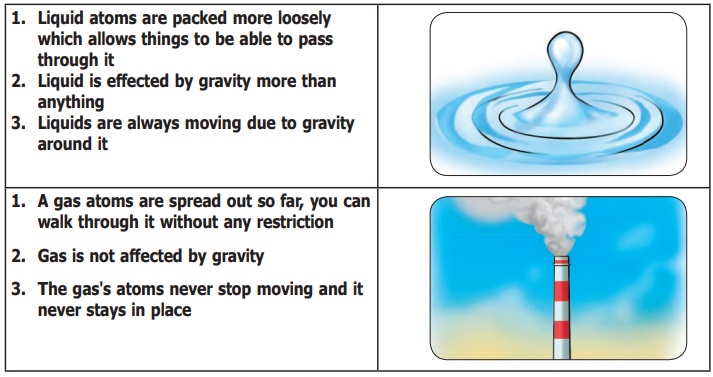 2. Using suitable apparatus from your laboratory separate the mixture of chalk powder, mustard oil, water and coins. Draw a flow chart to show the separation process.

Debate on “Food adulteration and detection”

Visit a nearby paddy field and rice mill and note down the different separating techniques used there. Is technology replacing some traditional practices?

Watch you tube video in the given link

Write the sequence of steps you would use for making tea.

Use the words : mixture, dissolve, filtrate and residue.

Tea can be prepared by the following steps:

(i)Take 100ml of water as a solvent and boil it a few minutes.

(iv) Now filter the solution. Collect the filtrate in a cup. The insoluble tea leaves will be left behind as residue.

Make a fruit or vegetable salad. Give reasons why you think it is a mixture.

We learnt about different objects and their properties. Can you tell why it is better to use plates made of paper or dry leaves better than the ones made of plastics? Discuss in small groups and share with the class.

Blood constitutes about 7-8% of human body weight. Blood has the important function of transporting oxygen and nutrients to our cells and getting rid of carbon dioxide, ammonia, and other waste products, in immunity and also in regulating our body temperature. Blood is composed of more than 4,000 different kinds of components. Four of the most plasma. 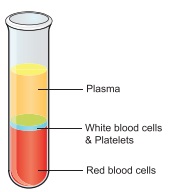 Plasma is the liquid in which the red cells, white cells and platelets are present.

Blood is not a pure substance but a mixture.

Find out details of separating its components.

Air is not a pure substance. It helps us in many ways from breathing to playing. Balloon sports are a very popular sport. The basis of how the balloon works is that, hot air is lighter than cool air. which makes balloon rise up Find out more about Hot Air balloons. 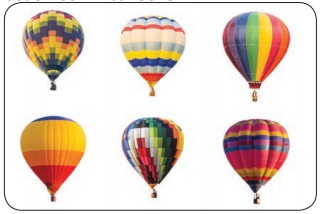 1. Malar’s mother was preparing to cook dinner. She accidentally mixed ground nuts with urad-dhal. Suggest a suitable method to separate the two substances so that Malar can have ground nuts to eat.

2. In a glass containing some water, tamarind juice and sugar is added and stirred well. Is this a mixture- can you tell why? Will this solution be sweet? or sour? or both sweet and sour?

Arrangement of particles in three different phases of matter is shown above.

a. Which state is represented by fig. I?

b. In which will be the inter particle attraction maximum?

c. Which one of them cannot be contained in an open vessel?

d. Which one can take the shape of its container?