A semi-automatic transmission (also known as clutch less manual transmission, automated manual transmission, e-gear, shift-tronic, flappy paddle gearbox, or paddle shift gearbox) is a system which uses electronic sensors, processors and actuators to do gear shifts on the command of the driver. This removes the need for a clutch pedal which the driver otherwise needs to depress before making a gear change, since the clutch itself is actuated by electronic equipment which can synchronize the timing and torque required to make gear shifts quick and smooth.

The system was designed by European automobile manufacturers to provide a better driving experience, especially in cities where congestion frequently causes stop-and-go traffic patterns. Like a tiptronic transmission, a semi-automatic transmission can also be switched to manual mode to perform gear shifting at the drivers wish.

The two most common semi-automatic transmissions

Unlike the conventional manual transmission system, there are two different gear/collar sets, with each connected to two different input/output shafts. The outer clutch pack drives gears 1, 3, 5 and reverse. It is just like two conventional manual transmission gear boxes in one. The inner clutch pack drives gears 2, 4, and 6. Instead of a standard large dry single-plate clutch, each clutch pack is a collection of four small wet interleaved clutch plates.

Due to space constraints, the two clutch assemblies are concentric. To automatically shift

efficiency. Another advanced technology used for direct shift trans-mission allows it to perform

“double clutching” by shifting the gear to neutral first, adjusting the spinning speed of the input shaft, and then shifting to the next gear. This makes gear shifting very smooth.

When the motor vehicle is stationary, in neutral, both clutch packs are fully disengaged. When the driver has selected D for drive (after pressing the foot brake pedal), the transmission's first gear is selected on the first shaft, and the clutch prepares to engage. At the same time, the second gear is also selected, but the clutch pack for second gear remains fully disengaged. When the driver releases the brake pedal, the clutch pack for the first gear takes up the drive, and the vehicle moves forward. Pressing the accelerator pedal increases forward speed. As the car accelerates, the transmission's computer determines when the second gear (which is connected to the second clutch) should be fully utilized.

Depending on the vehicle speed and amount of power being requested by the driver (full throttle or part-throttle normal driving), the D.S.G. then up-shifts. During this sequence, the DSG disengages the first clutch while engaging the second clutch (all power from the engine is now going through the second shaft), thus completing the shift sequence. This sequence happens in 8 ms, and there is practically no power loss.

Once the vehicle has shifted up to second gear, the first gear is immediately de-selected, and third gear (being on the same shaft as 1st and 5th) is pre-selected, and is pending. Once the time comes to shift, the second clutch disengages and the first clutch re-engages. This method of operation continues in the same manner up to 6th gear.Downshifting is similar to up-shifting but in reverse order. The car's computer senses the car slowing down or more power required, and thus lines up a lower gear on one of the shafts not in use, and then completes the downshift.

The actual shift timings are determined by the D.S.G.'s Electronic Control Unit, or E.C.U., which commands a hydro-mechanical unit, and the two units combined are called a "mechatronics" unit. Because the D.S.G. & E.C.U. uses "fuzzy logic", the operation of the DSG is said to be "adaptive"; i.e. the DSG will "learn" how the user drives the car, and will tailor the shift points accordingly.

In the vehicle instrument display, between the speedometer and tachometer, the available shift positions are shown, the current position of the shift lever is highlighted, and the current gear ratio is also displayed as a number. Under "normal", progressive acceleration and deceleration, the DSG shifts in a "sequential" mode, i.e. under acceleration: 1 > 2 > 3 > 4 > 5 > 6, and the same sequence reversed for deceleration. However, if the car is being driven at sedate speeds, with a light throttle opening, and the accelerator pedal is then pressed fully to the floor, this activates the "kick-down" function. During kick-down, the DSG can skip gears, going from 6th gear straight down to 3rd gear.

The floor selector lever also has an S position. When S is selected, "sport" mode is activated in the DSG. Sport mode still functions as a fully automatic mode, identical in operation to "D" mode, but up-shifts and down-shifts are made much higher up the engine rev-range. This aids a sportier driving manner, by utilizing considerably more of the available engine power, and also maximizing engine braking. However, this mode does have a worsening effect on the vehicle fuel consumption, when compared to D mode. S is also highlighted in the instrument display, and like D mode, the currently used gear ratio is displayed as a number.

Additionally, the floor shift lever also has another plane of operation, for manual or tiptronic mode, with spring-loaded "+" and "−" positions. This plane is selected by moving the stick away

from the driver (in vehicles with the drivers seat on the right, the lever is pushed to the left, and in left-hand drive cars, the stick is pushed to the right) when in "D" mode only. When this plane is selected, the D.S.G. can now be controlled like a manual gearbox, even though under a sequential shift pattern.

The readout in the instrument display changes to 6 -5- 4- 3- 2- 1, and just like the automatic modes, the currently used gear ratio is highlighted. To change up a gear, the lever is pushed forwards (against a spring pressure) towards the "+", and to change down, the lever is pulled rearwards towards the "−".

The DSG box can now be operated with the gear changes being (primarily) determined by the driver. This method of operation is commonly called "tiptronic". When accelerating in Manual/tiptronic mode, the D.S.G. will still automatically change up just before the red-line and when decelerating, it will change down automatically at very low revs, just before the engine idle speed (tick over). Furthermore, if the driver calls for a gear when it is not appropriate (i.e., engine speed near the red-line, and a down change is requested) the D.S.G. will delay the change until the engine revs are at an appropriate level to cope with the requested gear.

On certain "sporty” or high-powered cars paddle shifters are available. The paddle shifters have two distinct advantages: the driver can safely keep both hands on the steering wheel when using the Manual/tiptronic mode; and the driver can immediately manually override either of the automatic programs (D or S) on a temporary basis, and gain instant manual control of the D.S.G. box.

If the manual override of one of the automatic programs (D or S) is utilized intermittently, the gearbox will "default" back to the previously selected automatic mode after a predetermined duration of inactivity of the paddles, or when the car becomes stationary. Alternatively, should the driver wish to revert immediately to automatic control, this can be done by holding the "+" paddle for at least two seconds.

is almost the same as the conventional transmission system, except that the shifting of the se-lector is not an “H” pattern. Instead, all selector forks are connected to a drum. The drum has several

Therefore, it is impossible for an electro-hydraulic manual transmission to perform a gear shift from 1st to 3rd or 4th to 2nd. The shifting must be sequential, like 1st ▬► 2nd ▬► 3rd ▬►4th, or 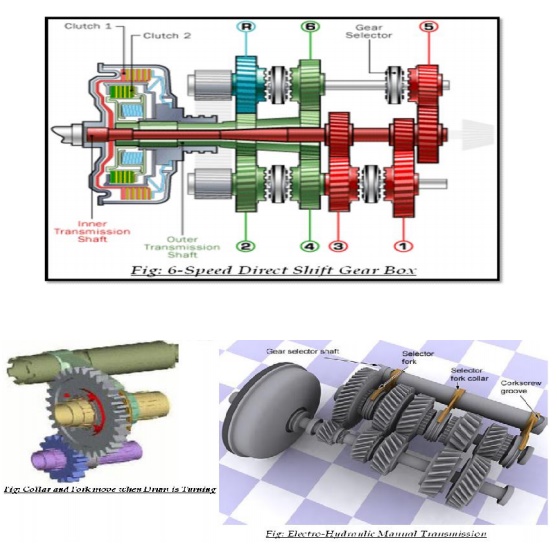 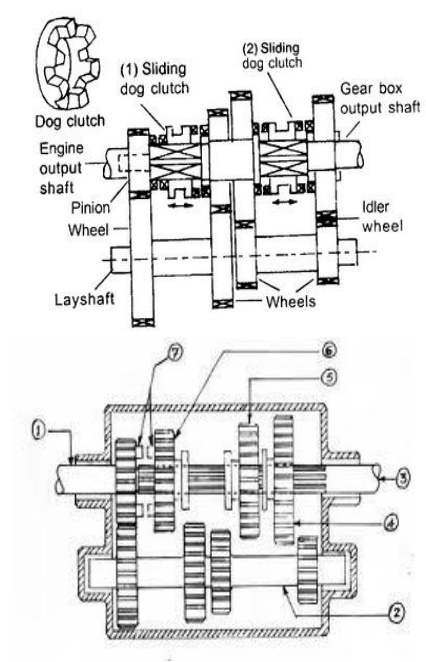