Relative differences in bad an water levels of a canal with those of the crossing stream as their discharges are the main factors for deciding the types of crossdrainage structure site.

Relative differences in bad an water levels of a canal with those of the crossing stream as their discharges are the main factors for deciding the types of crossdrainage structure site. By suitably caning the alignment of the canal between off taking point A and watershed the relative difference between the bed levels of the tributaries and canal at the crossing site can be al6tered. Consider three possible alignments ABC, ADE, a AFG of a canal taking off from a river at A and intersecting a tributary HBDFI at B,D, and before mounting watershed at C, E, and G, respectively figure. The distances AB, A and AF are almost the same and, hence, the canal reaches the crossing site with its bed m or less at the same level. But the bed levels of the tributary is highest at B, and the lowest at F in the reach BDF. Thus, if F is a suitable crossing site aqueduct, site D may necessitate the construction of a siphon aqueduct of level crossing and site B may require the construction of a siphon or a super passage. Thus, the type of cross drainage structure can be changed by suitably altering the crossing the site. 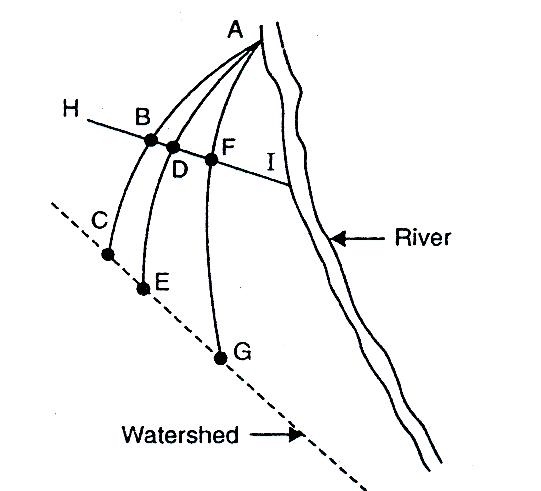 Figure: different canal alignments between off take and watershed.

When the crossing site is such that the canal FSL is well above the stream HFL the choice between aqueduct and siphon aqueduct is made depending on the stream discharge. For larger stream discharges (i.e., when the stream bed is much wider) an aqueduct is more suitable than a siphon aqueduct which requires lowering of the stream bed by a drop. Besides being costly, lowering of the bed may result in silting on the lowered stream bed which increases the risk of failure. However, an aqueduct necessitates heavy canal embankments towards the crossing. This is due to the wide flood crosssection of streams in plains and the acquirements that the canal must be well above the HFL, and the aqueduct has aqueduct has to be constructed a smaller part of the crosssection of the stream.

Siphon aqueducts are more suitable when the stream size is small compared to the canal size. In case of siphon aqueducts, the relative differences of water and bed levels of the canal with those of the crossing stream is small and, hence, embankments of only small height required.

If the stream HFL is well above the canal FSL, super passage is generally preferred in parison to siphon as the latter involves considerable head loss in the canal. In addition, the struction of a siphon under a stream with an readable bed requires heavy protection works. Foundations of the super passage and siphon have to be carried up to much below the dibble bed of the stream. A separate bridge across the stream trough has to be provided to try the canal road across the stream. The construction of these structures is relatively difficult costly due to the requirements of extensive training works and large stream trough to try the high flood discharge. If the canal serves navigation needs also, then sufficient headway would be provided for the passage of boats.

If the bed and water levels of the canal and stream at the crossing site are approximately same, a level crossing is provided. Sometimes, due to prohibitive costs of siphons and aqueducts, the canal alignment between the off take and watershed is suitably altered hat the level crossing can be provided at the crossing site. The initial cost of a level crossing generally much lower than the cost of other crossdrainage structures. Also, the perennial charge of the stream can be diverted to the canal to provide additional irrigation. However, level crossing requires permanent staff for continuous watch, maintenance, and operation hates. Also, when the stream is passing the high flood discharge, the canal may have to be down to prevent the sediment load of the stream from entering the canal and silting it. There, if the canal FSL is higher than the general ground level, the HFL of the stream would ease on the upstream side of the crossing site causing submergence of the land. To prevent submergence of the land, marginal banks are provided.

In addition to the above factors, the topography of the terrain, foundation conditions, me of the stream, and dewatering requirements would also affect the choice of the type of sdrainage structures. Detailed examination of the terrain topography and the foundation necessary to locate a stable reach of the stream with good foundations and permitting early a rightangled crossing. For streams carrying high sediment discharge, the possibility coking up of the siphon and the effect of fluming of the stream should be kept in mind. Altering of foundations is necessary in the construction of foundations for crossdrainage structures. An accurate estimate of the cost and method of dewatering must be work when design involves lying of foundations below the ground water table.