Desirable locations for irrigation canals on any gravity project, their cross-sectional designs and construction costs are governed mainly by topographic and geologic conditions along different routes of the cultivable lands.

Desirable locations for irrigation canals on any gravity project, their cross-sectional designs and construction costs are governed mainly by topographic and geologic conditions along different routes of the cultivable lands. Main canals must convey water to the higher elevations the cultivable area. Branch canals and distributaries convey water to different parts of the indigable areas. 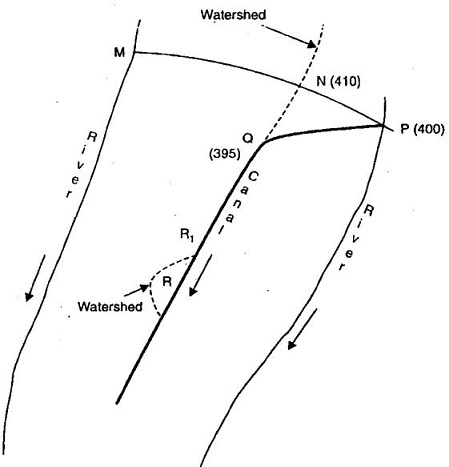 Figure: Head reach of a main canal in plains

In hilly areas, the conditions are vastly different compared to those of plains. Rivers in valleys well below the watershed or ridge, and it may not be economically feasible to the channel on the watershed. In such situations, contour channels are constructed. Contour channels follow a contour while the maintaining the required longitudinal. It continues like this and as river slopes are much steeper than the required canal bed the canal encompasses more area between itself and the river. It should be that the more fertile areas in the hills are located at lower levels only. 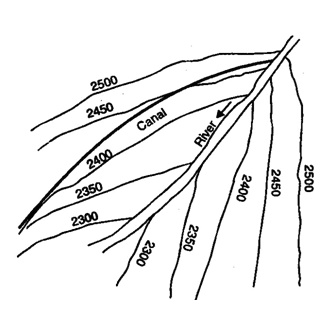 In order to finalise the channel network for a canal irrigation project, trial alignments channels are marked on the map prepared during the detailed survey. A large-scale map is carried to work out the details of individual channels. However, a small-scale map depicting entire command of the irrigation project is also desirable. The alignments marked on the entire transferred on the field and adjusted wherever necessary. These adjustments are referred on the map as well. The alignment on the field is marked by small masonry pillars by 200 metres. The centre line on top of these pillars coincides with the exact alignment between the adjacent pillars, a small trench, excavated in the ground, marks the alignment.