This absorbed water percolates deep into the ground and is the main cause of loss of water carried by a canal.

Water comes in contact with an earthen surface, whether artificial or natural, the surface of water. This absorbed water percolates deep into the ground and is the main cause of loss of water carried by a canal. In addition, some canal water is also lost due to evaporation. Loss due to evaporation is about 10 per cent of the quantity lost due to seepage. The seepage caries with the type of the material through which the canal runs. Obviously, the loss is near in coarse sand and gravel, less in loam, and still less in clay soil. If the canal carries harden water, the pores of the soil are sealed in course of time and the canal seepage reduced time. In almost all cases, the seepage loss constitutes an important factor which must be coated for in determining the water requirements of a canal.

Between the head works of a canal and the water courses, the loss of water on account of the and evaporation is considerable. This loss may be of the order of 20 to 50 per cent of diverted at the head works depending upon the type of soil through which canal runs the climatic conditions of the region.

For the purpose of estimating the water requirements of a canal, the total loss due to the separation and seepage, also known as conveyance loss, is expressed as m3/s per million metres of either wetted perimeter or the exposed water surface area. Conveyance loss calculated using the values given in Table. In UP, the total loss (due to seepage and separation) per million square metres of water surface varies from 2.5 m3/s for ordinary clay of 5.0 m3/s for sandy load. The following empirical relation has also been found to give curable results. 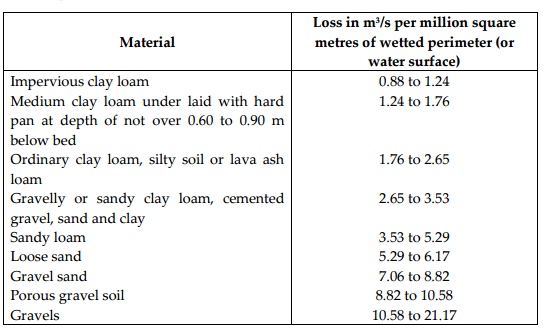 In this relation, ql is the loss expressed in m3/s per kilometer length of canal and B and h are, respectively, canal bed width and depth of flow in metres.