Need and Types Of Cross-Drainage Structure

Aligning a canal on the watershed of an area is necessary so that water from the canal can by gravity to fields on both sides of the canal.

Aligning a canal on the watershed of an area is necessary so that water from the canal can by gravity to fields on both sides of the canal. However, a canal taking off from a river at has to necessarily cross some streams or drainages (such as a,b,c, and d in the before it can mount the watershed of the area at B. In order to carry canal is on the waters B, usually no cross-drainage structure is required except in situations when the canal leave a looping watershed (such as DEF in figure 11.1) for a short distance between D and may cross tributaries (as ate and f). Cross-drainage structures are constructed to negotiate aligned channel over, below, or at the same level of a stream . 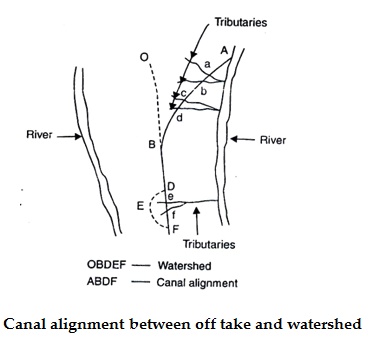 The cross-drainage structures can be classified under three broad categories depending whether the structures is built to negotiate a carrier channel over, below, or at the same level the stream channel.

Structures for a Carrier Channel Over a Natural Stream

Structures falling under this category are aqueducts and siphon aqueducts. Maintenance structures is relatively easy as these are above ground and can be easily inspected. The full supply level (FSL) of a canal is much higher than the high flood level (HFL) of a which, in turn, is lower than the bottom of the canal trough, the canal is carried over tream by means of a bridge-like structure, which is called an aqueduct. The stream water is through the space below the canal such that the HFL is lower than the underside of the trough, figure. 11.2 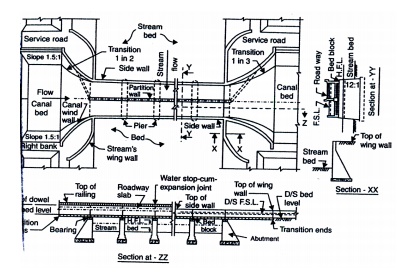 Figure: Typical plan and section of an aqueduct (1)

Siphon Aqueduct (Figure) is an aqueduct in which the bed of the stream is depressed passes under the canal trough, and the stream water flows under pressure below the such aqueducts, the stream bed is usually provided with a concrete or masonry floor.

Aqueducts and siphon aqueducts are further classified into the following types:

Type I: In this type of structure, the earthen canal banks are carried as such and, the culvert length (i.e., the length of barrels through which the stream water is passed u the canal) has to be long enough to support the water section as well as the earthen ban the canal Figure (a). In this type of structure, the canal section is not flumed and ram unaltered. Hence, the width (across the canal) of the structure is maximum. This type structure, obviously, saves on canal wings and banks connections and is justified only for streams so that the length (along the canal) of the structure is small. An extreme example such a structure would be when the stream is carried by means of a pipe laid under the be the canal. 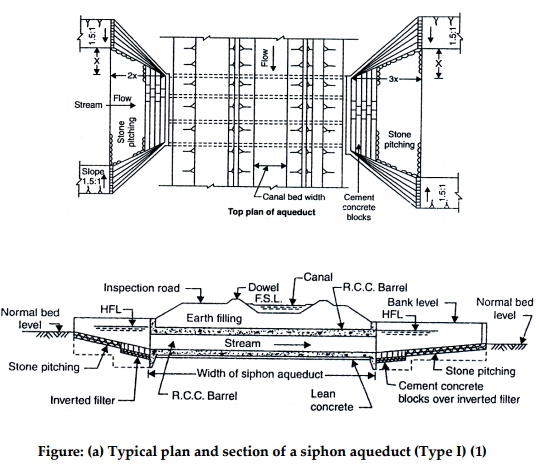 Figure: (a) Typical plan and section of a siphon aqueduct (Type I) (1)

Type II: This type of structure is similar to the Type I with provision of retaining was to retain the outer slopes of the earthen canal banks figure (b). This reduces the length the culvert. This type of construction can be considered suitable for streams of intermedia size.

Type III: In this type of structure, the earthen canal banks are discontinued through aqueduct and the canal water is carried in a trough may be of either masonry or concre figure©. The earthen canal banks are connected to the respective trough walls on the sides by means of wing walls. The width of the canal is also reduced over the crossing. In the type of structure, the width of the structure is minimum and, hence, the structure is suitable for large streams requiring considerable length of aqueduct between the abutments. 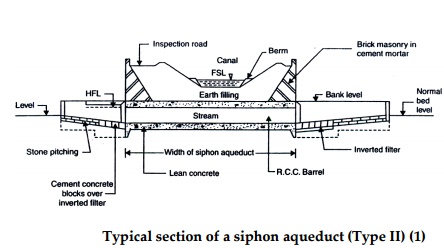 igure: (b) Typical section of a siphon aqueduct (Type II) (1) 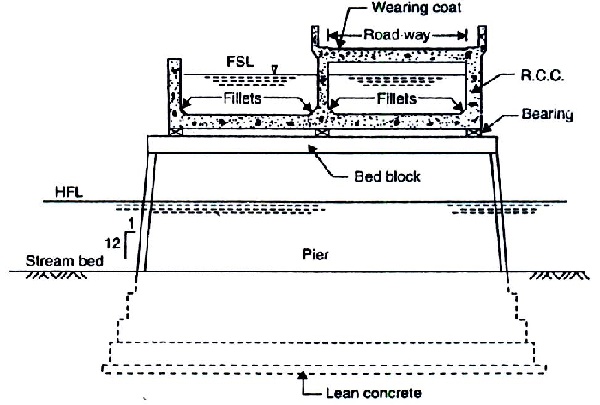 Structures for a Carrier channel Underneath a Natural Stream

The structures falling under this category are super passages and siphons. The maintenance of such structures is relatively difficult as these are not easily accessible.

A super passage Figure is like an aqueduct, but carries the stream over the canal. The canal FSL is lower than the underside of the stream trough and, hence, the canal water flows with a free surface. 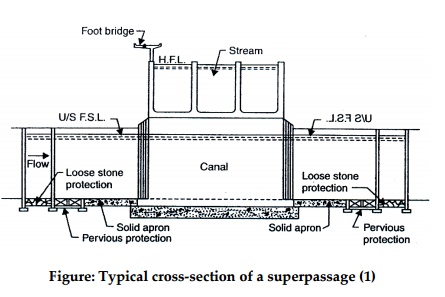 Figure: Typical cross-section of a superpassage (1)

A siphon Figure carries the canal water under pressure through barrels below the stream trough. For siphoning small discharges, precast RCC pipes will be economical. For siphoning higher discharges, horse-shoe-shaped rectangular or circular barrels, either single or multiple, are adopted. Roofs or rectangular barrels are, at times, arch-shaped for economy For discharges under high pressures, circular of horse-shoe-shaped barrels are more suitable 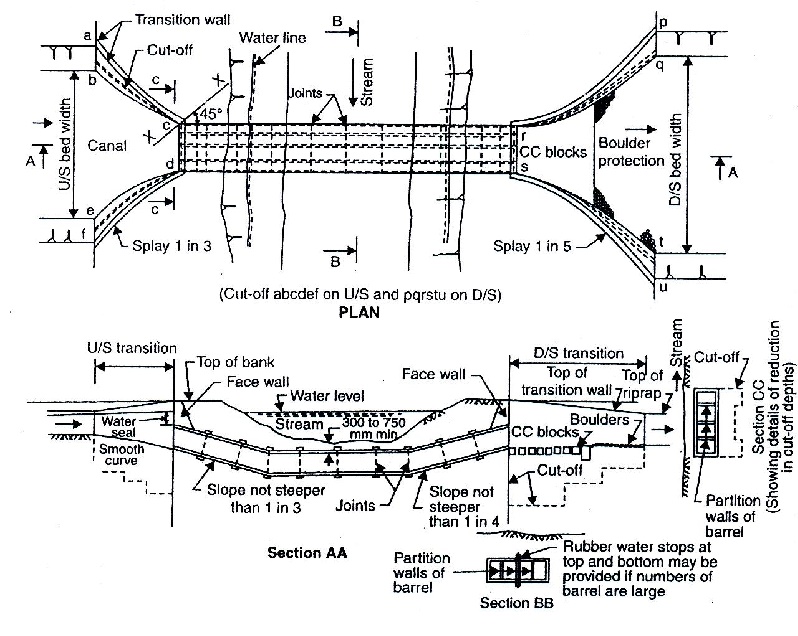 Structures falling under this category are level crossings and inlets. Inlets are, at times, combined with escapes. When the canal and the stream meet each other at practically the level, a level crossing figure is provided. Level crossings involve intermixing of the canal and stream waters. They are usually provided when a large-sized canal crosses a large tream which carries a large discharge during high floods, and when siphoning of either of the two is prohibitive on considerations of economy and non-permissibility of head loss through siphon barrels (1). A Barrier with its top at the canal FSL is constructed across the stream and it the upstream end of the junction. The regulators are provided across the stream and canal it the downstream junctions of the level crossing. These regulators control the flow into the canal and stream downstream of the crossing. This type of arrangement is also useful in augmenting the canal supplies with the stream discharge. 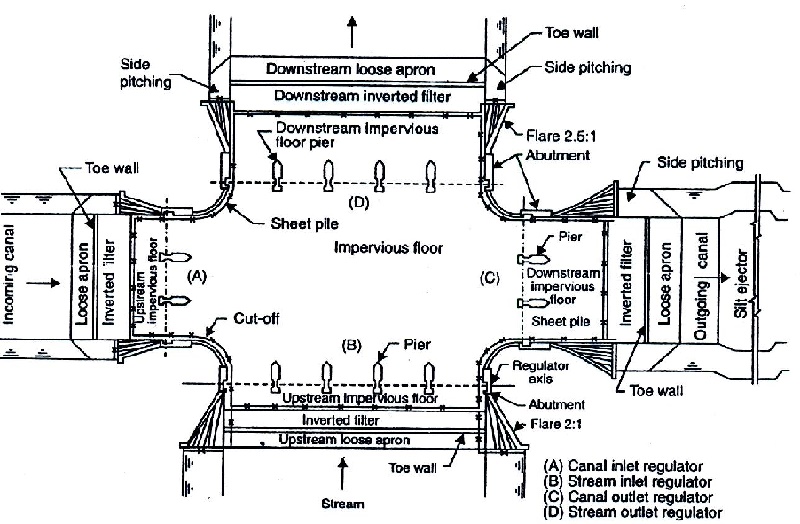 Sometimes a small stream is diverted into a larger stream and a cross-drainage struck for the combined discharge is provided at a suitable site.