Secondary sex characteristics are the physical features which distinguish male from female.

Secondary sex characteristics are the physical features which distinguish male from female. After the progression of puberty, boys and girls become dissimilar in appearance. The secondary sex characters are regulated by the hormones the testosterone or androgen secreted by the testes of the males and estrogen secreted by the ovaries of the females. Androgens cause the growth of the larynx, muscle development, skeletal size and distribution of body and pubic hair, and stimulation of sweat glands. Estrogen and progesterone are the female sex hormones. Estrogen stimulates the development of the breast, the external genitalia, pubic and axillary hairs, and the distribution of body fat. 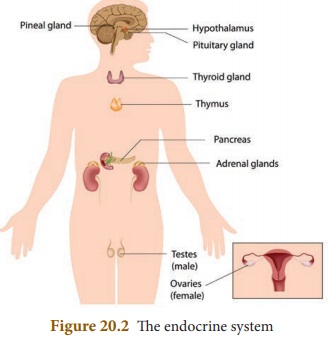 The following are the secondary sex characteristics of boys.

The skin becomes coarse and the pores in the skin enlarge.

The oil producing glands in the skin enlarge and due to this acne may appear on the faces.

The strength of the muscle increases and it gives shape to arms, legs and shoulders.

During this period voice changes occur and the voice becomes husky. Then its pitch drops and the volume increases.

At puberty, the growth of the larynx is larger in boys than that of girls. The growing voice box in boys can be seen as a protruding part of the throat called Adam’s apple, so that the voice becomes deep and harsh. This is caused mainly by male hormone (regulatory chemicals) during adolescence. As a result of this, muscles (chords) attached to the cartilage get loosened and thickened. When air passes through these loosened and thickened chords a hoarse sound is produced. In girls larynx is hardly visible from outside because of its small size and the voice becomes high pitched. 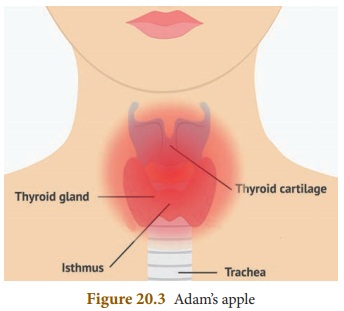 Girls show the following secondary sex characteristics at the time of puberty.

Due to the enlargement of the pelvic bone and the development of subcutaneous fat, the hip becomes wider and rounder.

After the enlargement of hips, the breasts begin to develop during this time.

Pubic hair appears followed by axillary and body hair on the limbs.

Increase in muscles takes place which gives shape to shoulders, arms and legs.

Voice becomes shrill and voice breaks are rare among girls.

The skin becomes coarser and the pores enlarge as in the case of boys.

The secretions of sweat and sebaceous or subcutaneous glands (Oil glands) are very active during adolescence. Many adolescent boys and girls get pimples on face because of increased activity of these glands in the skin. Owing to extra secretions sometimesa distinctive odour is also produced from the bodies. 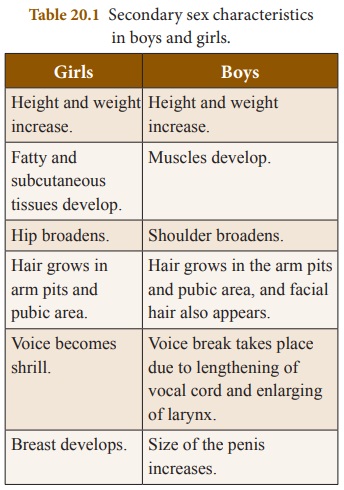 * Has your voice changed?

* Are there pimples or acne on your face?

* Do you feel that some changes have taken place in your body?

These changes are normal in your development. Discuss with your teacher or counsellor in your school and clarify your doubts.