The beginning of the menstrual cycle marks the onset of puberty in human females.

The beginning of the menstrual cycle marks the onset of puberty in human females. The menstrual cycle begins with the casting off of endometrial lining of the uterus and bleeding. The casting of endometrium can be considered as periodic preparation for pregnancy. Menstruation occurs if an ovum released by the ovary of a woman is not fertilized during ovulation. This is described below.

1. When a girl reaches puberty at the age of about 10, the sex hormones released into her blood cause some of the ova (or egg cells) in her ovaries to become mature (or ripe).

2. Usually one mature ovum (or egg) is released from one of the ovaries into the oviduct once in every 28 days. This is called ovulation.

3. Before ovulation (or release of ovum), the inner wall of uterus becomes thick and spongy, and full of tiny blood vessels (or blood capillaries). It prepares itself to receive the fertilized ovum. 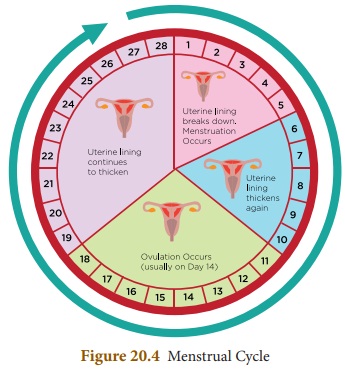 5. Menstruation usually occurs 14 days after ovulation and usually lasts for about 3 to 5 days.

6. After menstruation is over, the inner lining of the uterus starts building up again so that it may become ready to receive the next ovum.

7. If the ovum does not get fertilized even now, then menstruation takes place again. This cycle of menstruation is repeated again and again in women after every 28 days. The menstrual cycle is controlled by hormones.

Menstruation stops temporarily when the ovum gets fertilized and the women gets pregnant. This is because, in this case the thick and soft lining of the uterus containing lot of blood vessels is needed for the growth and development of the fertilized ovum to form a baby. Menstruation restarts after the birth of the baby. Menstruation also stops due to nutritional deficiencies, low body weight, stress, eating disorder, excessive weight gain etc.