The SR flip-flop can be considered as one of the most basic sequential logic circuit possible.

The SR flip-flop can be considered as one of the most basic sequential logic circuit possible. The flip-flop is basically a one-bit memory bistable device that has two inputs, one which will "SET" the device (meaning the output = "1"), and is labelled S and another which will "RESET" the device (meaning the output = "0"), labelled R. Then the SR description stands for set/reset. The reset input resets the flip-flop back to its original state with an output Q that will be either at a logic level "1" or logic "0" depending upon this set/reset condition.

A basic NAND gate SR flip-flop circuit provides feedback from both of its outputs back to its inputs and is commonly used in memory circuits to store data bits. Then the SR flip-flop actually has three inputs, Set, Reset and its current output Q relating to it's current state or history. The term "Flip-flop" relates to the actual operation of the device, as it can be "flipped" into one logic state or "flopped" back into another.

The simplest way to make any basic one-bit set/reset SR flip-flop is to connect together a pair of cross-coupled 2-input NAND gates to form a set-reset bistable or an active LOW SR NAND Gate Latch, so that there is feedback from each output to one of the other NAND gate inputs. This device consists of two inputs, one called the set, S and the other called the reset, R with two corresponding outputs Q and its inverse or complement Q as shown below.

Truth Table for this Set-Reset Function

It can be seen that when both inputs S = "1" and R = "1" the outputs Q and Q can be at either logic level "1" or "0", depending upon the state of inputs S or R BEFORE this input condition existed. However, input state R = "0" and S = "0" is an undesirable or invalid condition and must be avoided because this will give both outputs Q and Q to be at logic level "1" at the same time and we would normally want Q to be the inverse of Q. However, if the two inputs are now switched HIGH again after this condition to logic "1", both the outputs will go LOW resulting in the flip-flop becoming unstable and switch to an unknown data state based upon the unbalance. This unbalance can cause one of the outputs to switch faster than the other resulting in the flip-flop switching to one state or the other which may not be the required state and data corruption will exist. This unstable condition is known as its Meta-stable state.

As well as using NAND gates, it is also possible to construct simple one-bit SR Flip-flops using two cross-coupled NOR gates connected in the same configuration. The circuit will work in a similar way to the NAND gate circuit above, except that the inputs are active HIGH and the invalid condition exists when both its inputs are at logic level "1", and this is shown below.

The NOR Gate SR Flip-flop

Edge-triggered flip-flops require a nice clean signal transition, and one practical use of this type of set-reset circuit is as a latch used to help eliminate mechanical switch "bounce". As its name implies, switch bounce occurs when the contacts of any mechanically operated switch, push-button or keypad are operated and the internal switch contacts do not fully close cleanly, but bounce together first before closing (or opening) when the switch is pressed. This gives rise to a series of individual pulses which can be as long as tens of milliseconds that an electronic system or circuit such as a digital counter may see as a series of logic pulses instead of one long single pulse and behave incorrectly. For example, during this bounce period the output voltage can fluctuate wildly and may register multiple input counts instead of one single count. Then set-reset SR Flip-flops or Bistable Latch circuits can be used to eliminate this kind of problem and this is demonstrated below. 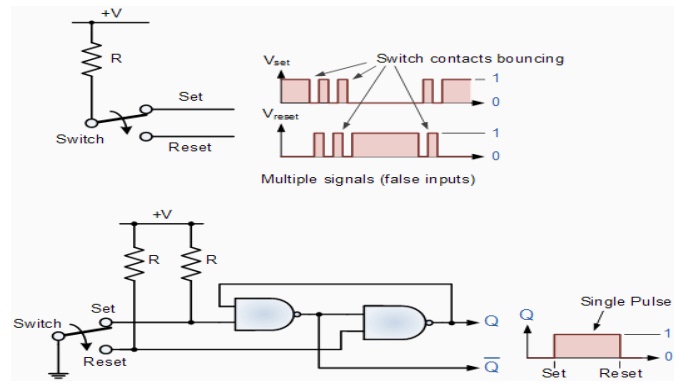 Depending upon the current state of the output, if the set or reset buttons are depressed the output will change over in the manner described above and any additional unwanted inputs (bounces) from the mechanical action of the switch will have no effect on the output at Q. When the other button is pressed, the very first contact will cause the latch to change state, but any additional mechanical switch bounces will also have no effect. The SR flip-flop can then be RESET automatically after a short period of time, for example 0.5 seconds, so as to register any additional and intentional repeat inputs from the same switch contacts, for example multiple inputs from a keyboards "RETURN" key.

Set-Reset bistable latches can also be used as Monostable (one-shot) pulse generators to generate a single output pulse, either high or low, of some specified width or time period for timing or control purposes. The 74LS279 is a Quad SR Bistable Latch IC, which contains four individual NAND type bistable's within a single chip enabling switch debounce or monostable/astable clock circuits to be easily constructed. 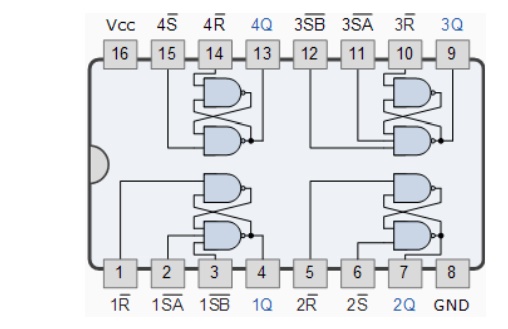 It is sometimes desirable in sequential logic circuits to have a bistable SR flip-flop that only changes state when certain conditions are met regardless of the condition of either the Set or the Reset inputs. By connecting a 2-input AND gate in series with each input terminal of the SR Flip-flop a Gated SR Flip-flop can be created. This extra conditional input is called an "Enable" input and is given the prefix of "EN". The addition of this input means that the output at Q only changes state when it is HIGH and can therefore be used as a clock (CLK) input making it level-sensitive as shown below.

When the Enable input "EN" is at logic level "0", the outputs of the two AND gates are also at logic level "0", (AND Gate principles) regardless of the condition of the two inputs S and R, latching the two outputs Q and Q into their last known state. When the enable input "EN" changes to logic level "1" the circuit responds as a normal SR bistable flip-flop with the two AND gates becoming transparent to the Set and Reset signals. This enable input can also be connected to a clock timing signal adding clock synchronisation to the flip-flop creating what is sometimes called a "Clocked SR Flip-flop". So a Gated Bistable SR Flip-flop operates as a standard bistable latch but the outputs are only activated when a logic "1" is applied to its EN input and deactivated by a logic "0".

In the next tutorial about Sequential Logic Circuits, we will look at another type of edge-triggered flip-flop which is very similar to the RS flip-flopcalled a JK Flip-flop named after its inventor, Jack Kilby. The JK flip-flop is the most widely used of all the flip-flop designs as it is considered to be a universal device. 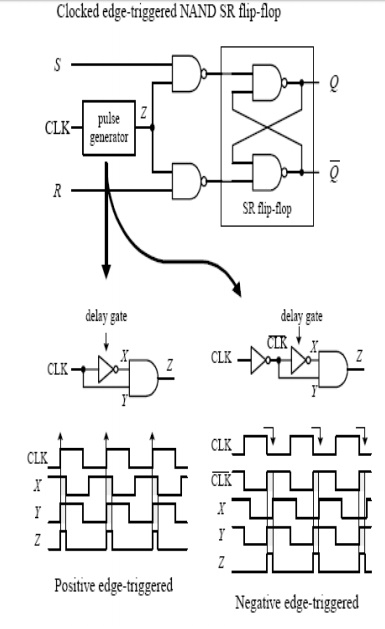 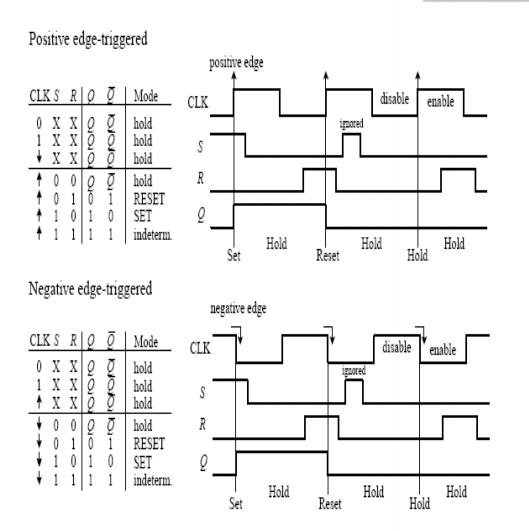