The Johnson Ring Counter or "Twisted Ring Counters", is another shift register with feedback exactly the same as the standard Ring Counter above, except that this time the inverted output Q of the last flip-flop is now connected back to the input D of the first flip-flop as shown below. The main advantage of this type of ring counter is that it only needs half the number of flip-flops compared to the standard ring counter then its modulo number is halved. So a "n-stage" Johnson counter will circulate a single data bit giving sequence of 2n different states and can therefore be considered as a "mod-2n counter". 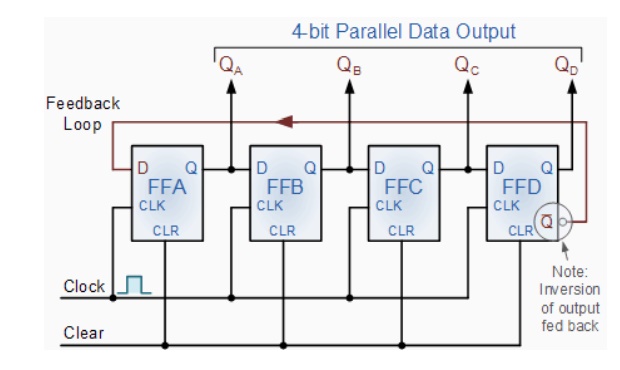 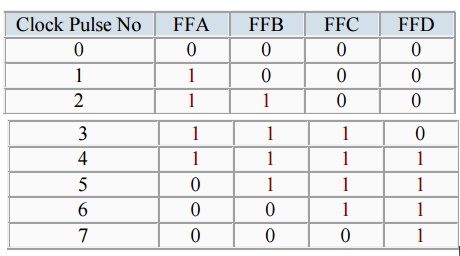 As well as counting or rotating data around a continuous loop, ring counters can also be used to detect or recognise various patterns or number values within a set of data. By connecting simple logic gates such as the AND or the OR gates to the outputs of the flip-flops the circuit can be made to detect a set number or value. Standard 2, 3 or 4-stage Johnson ring counters can also be used to divide the frequency of the clock signal by varying their feedback connections and divide-by-3 or divide-by-5 outputs are also available.

A 3-stage Johnson Ring Counter can also be used as a 3-phase, 120 degree phase shift square wave generator by connecting to the data outputs at A, B and NOT-B. The standard 5-stage Johnson counter such as the commonly available CD4017 is generally used as a synchronous decade counter/divider circuit. The smaller 2-stage circuit is also called a "Quadrature" (sine/cosine) Oscillator/Generator and is used to produce four individual outputs that are each "phase shifted" by 90 degrees with respect to each other, and this is shown below. 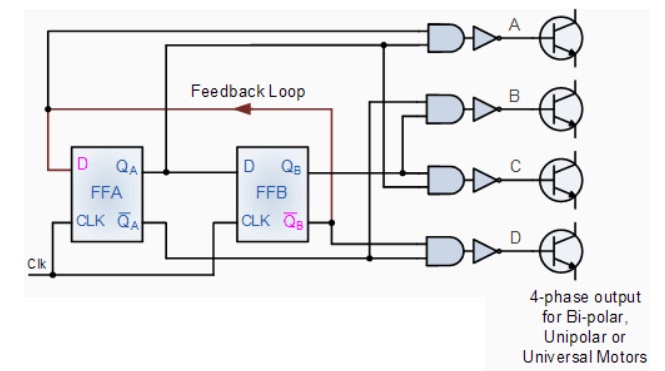 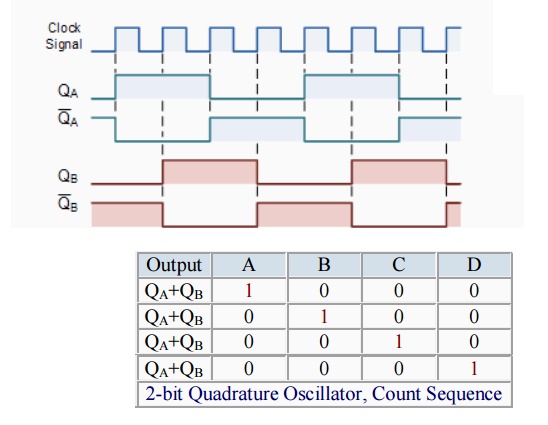 As the four outputs, A to D are phase shifted by 90 degrees with regards to each other, they can be used with additional circuitry, to drive a 2-phase full-step stepper motor for position control or the ability to rotate a motor to a particular location as shown below. 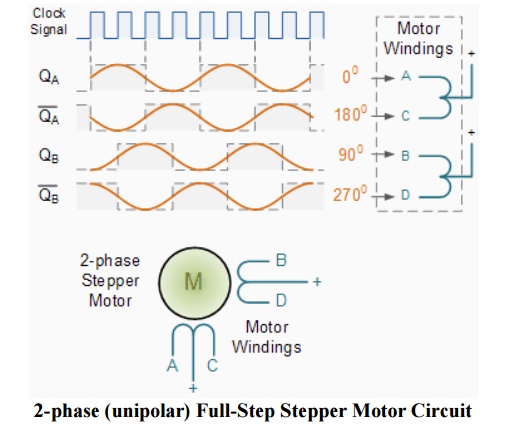 The speed of rotation of the Stepper Motor will depend mainly upon the clock frequency and additional circuitry would be require to drive the "power" requirements of the motor. As this section is only intended to give the reader a basic understanding of Johnson Ring Counters and its applications, other good websites explain in more detail the types and drive requirements of stepper motors.