Role of Political Parties in a Democracy

For the effective functioning of a democracy, the existence of political parties that represent conflicting interests is mandatory.

Role of Political Parties in a Democracy

For the effective functioning of a democracy, the existence of political parties that represent conflicting interests is mandatory. While they advocate various interests and policies, largely political parties adopt Rightist ideology (conservative, traditional and capitalistic) or Leftist (pro-equality, liberal and labour interests). While it is true that political parties are essential for attaining the democratic ideal, the rise of individual parties with non-democratic agenda and authoritarian leadership is a critical challenge to Democracy. This is very relevant in the case of a multicultural, multilingual, multi religious and economically diverse country like India, only political parties can truly represent the multidimensional interests of people from every corner of the country. It is vital in a democracy like India that political parties exercise maturity and maintain a secular position, the precious and precarious unity and stability of India cannot be maintained. It is in the interests of the nation, that responsibly and principled parties show a level of maturity and responsibility in exercising their duties and functions for the sustainability of democratic institutions.

Role of Opposition in a Democracy

Pressure or Interest groups also play an important role in special issues and events. These are organized groups, having common political and social interests, which influence decisions from outside. Pressure groups have voluntary membership and lobby for specific interests. Unlike political parties, pressure groups do not contest elections. The Pressure Groups are able to influence the government through various techniques with various public policy issues and are therefore called pressure groups. Professional pressure groups may include business interests, trade unions, Farmers, Teachers and Students, Doctors, culture groups, and institutional groups. Pressure Groups play an important role in the Indian political system by acting as a link and source of communication between the masses and the political parties. They sensitize the public towards vital socio-economic issues and through their lobbying, influence both the government and the administrative policies. 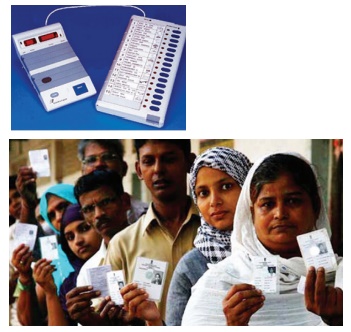 The result of opinion polls may or may not actually collaborate the actual results. Yet they are important in generating opinions among the unsure and undecided as well as help to sustain a balance in voting practices for all parties concerned.