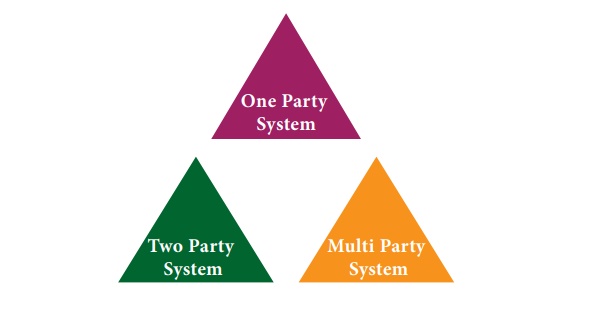 In a democracy, political parties serve as an integral link through which government and the public can interact.

In a democracy, political parties serve as an integral link through which government and the public can interact. Political Parties act as a foundation that orients the people towards political initiatives and public experience. Political Parties work to influence political thought and opinion with the intention of mobilizing votes. They provide a platform for political, economic and social activism that serves as a training ground for future regional and national leadership. In the long run they hold leaders accountable for their actions through rigorous debate and queries both within the party as well as through opposition parties. Thus the people are presented with a diverse choice of candidates, ideologies and approaches to various issues governing the nation. Their confidence in democracy is thus reinforced in the knowledge that they can bring about change and transformation should a majority of the population desire a transformation in the way they are governed.

The party system helps to operate and stabilize governments and they are particularly relevant for the effective functioning of democracies. The party system provides a system of checks and balances against the government’s policies. By soliciting popular support among the masses and providing a structure for leadership and dialogue within the party according to specific party objectives and agenda, it helps sustain good governance.

Different types of party system have evolved in various parts of the globe depending on the particular elements of democracy practiced. By and large the quality of a democracy is determined by how the government is representative of its people, how accountable the government is to its people, how human rights and equality of status and opportunity is guaranteed to all citizens and the level of political participation exercised by the people. The various types of party system address these issues in different ways, thereby determining the quality of democracy practiced. 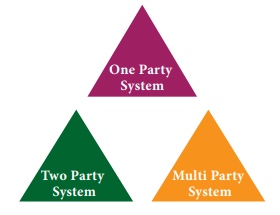 A. One Party System

In a one party system, a single political party exercises its right to form the government, which is often derived from a written or unwritten constitution. In most cases under a one party system, there is less participation and weaker accountability. Examples: Communist Party of China, (CPC) the Peoples` Action Party (PAP)in Singapore, Korean Workers Party, (KWP) North Korea, Communist Party of Vietnam (CPV) Vietnam, Communist Party of Cuba (CPC) Cuba. The single party system does not provide adequate space for democratic expressions and not provide scope for alternative. For example in the 1920s fascist movements advocating nationalistic militarism, captured power in Germany under Hitler, in Italy under Mussolini and in Spain under General Franco. They prevented other political parties to emerge.

In the two party system, two political parties, with distinctly different interests have equal opportunity to attain a majority and form the government. The majority party is the governing party and the minority party forms the opposition party in two-party systems. The Two-Party system has far greater accountability by the political leaders and greater political participation. The threat of being voted out by the opposition hangs as a ‘Damocles sword’ on the incumbent thereby guaranteeing a higher degree of responsible conduct and action. However since the political atmosphere is heavily polarized, drastic changes can happen once a party loses power which may prove detrimental to national interests. Examples of the two-party system include USA –Democrats and Republicans and UK Conservatives and Liberals.

However, in either country there is no constitutional restriction on number of parties. The constitutional procedures and peoples’ political maturity led to the emergence of two party system.

In the Multi- party system, multiple political parties are capable of garnering popular support and forming a government, either as a majority party or in coalition with many non-majority parties with similar political objectives. In this system, the political leaders are constantly observed and checked by checks and balances by their coalition partners. They are also subject to rigorous accountability to the people. The multi-party system offers the electorate the multiple avenues of political participation and the ability to bring about political change for greater national development.

The proportional representation system in France and Italy results in multi-party systems and coalition cabi-nets.

Examples of countries with multi-party systems include Canada, France, Germany, India and Sweden.

Topic for Pair 2:Why do we need at least two parties in a democratic system?

Topic for Pair 3: If all the decision of a political party are made by a single family and all other members are neglected, then what challenge is being faced by that party?

Topic for Pair 4: Do you think that dynasty (family) politics is confined to only a few states or parties?