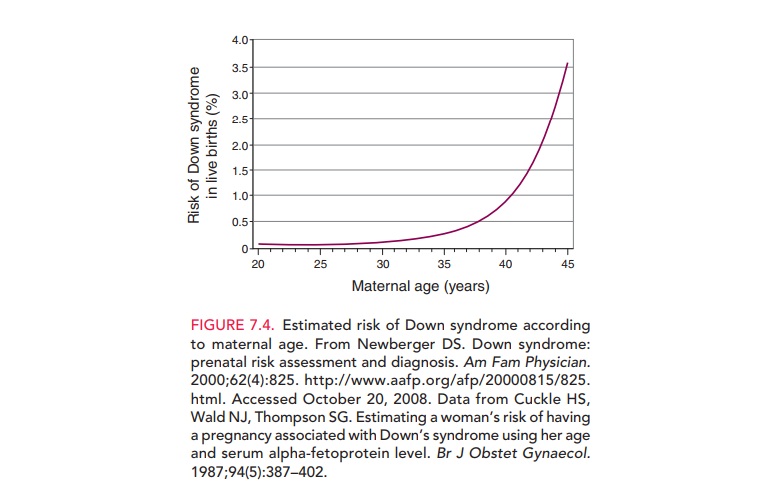 Several factors have been identified that increase the risk of having a child with a chromosomal abnormality, includ-ing maternal or paternal age and exposure to certain drugs.

Several factors have been identified that increase the risk of having a child with a chromosomal abnormality, includ-ing maternal or paternal age and exposure to certain drugs. Other factors, such as ethnicity or a family history of a disease, may indicate that an individual carries a gene for a Mendelian disorder. The first step in assessing risk is to document information about the patient’s family and personal history (see Appendix 1, Antepartum Record). This record is an effective method for obtaining informa-tion concerning personal and family medical history, parental exposure to potentially harmful substances, or other issues that may have an impact on risk assessment and management. This information can be collected prior to conception during a preconception office visit, or dur-ing the first prenatal visit in the first trimester.

Some infectious diseases, including cytomegalovirus, rubella, and sexually transmitted diseases (see Infectious Diseases in Pregnancy), as well as certain drugs (see Preconception and Antepartum Care) have been linked to an increased risk of birth defects. Preexisting diabetes mellitus may also predispose a fetus to a congenital anomaly. Because these defects are not gene-based, family history and genetic testing procedures, such as amniocen-tesis or CVS, cannot be used to detect these abnormalities. Ultrasonography is the mainstay of surveillance for infec-tious and teratogen-induced congenital abnormalities.

The incidence of trisomy 21 (Down syndrome) among newborns of 35-year-old women is 1:385. Although the risk increases with age, the majority of cases of Down syndrome occur in women younger than 35 years of age (Fig. 7.4). In addition to Down syndrome, other chromosomal abnor-malities increase in frequency with advanced maternal age (see Table 7.1). 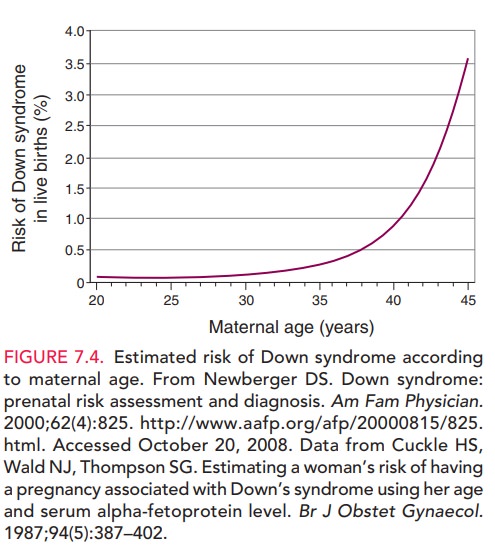 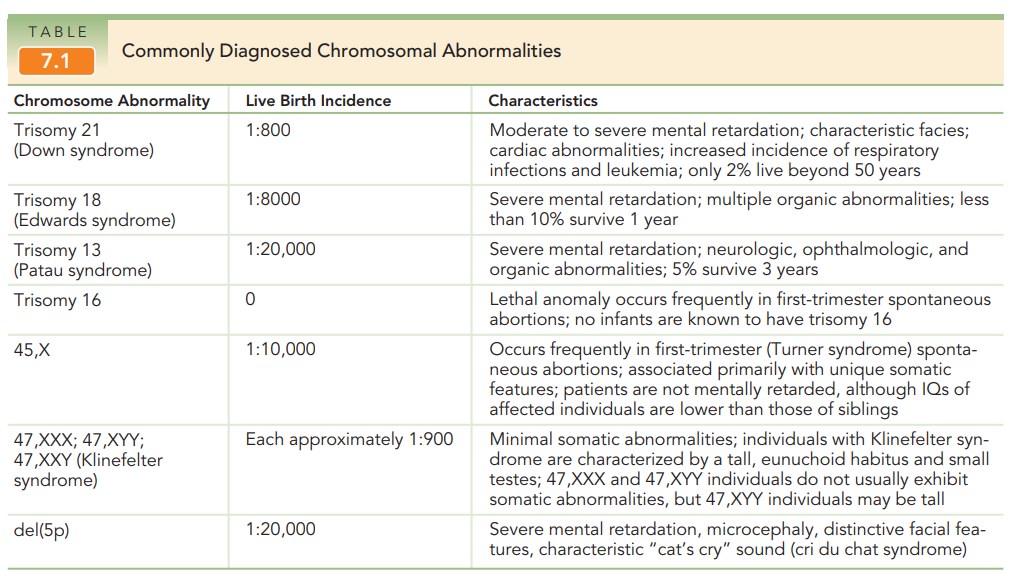 Women who have had a previous pregnancy complicated by trisomy 21, 18, or 13 or any other trisomy in which the fetus survived at least to the second trimester, are at risk of having another pregnancy complicated by the same or different trisomy. The risk of trisomy recurrence is 1.6 to 8.2 times the maternal age risk, depending on several factors: the type of trisomy, whether the index pregnancy was a spontaneous abortion, maternal age at initial occurrence, and maternal age at subsequent prenatal diagnosis.

At least half of all first-trimester pregnancy losses result from fetal chromosomal abnormalities. The most common are monosomy X; polyploidy (triploidy or tetraploidy); and trisomies 13, 16, 18, 21, and 22.

Increasing paternal age, particularly after age 50 years, predisposes the fetus to an increase in gene mutations that can affect X-linked recessive and autosomal dominant dis-orders, such as neurofibromatosis, achondroplasia, Apert syndrome, and Marfan syndrome.

Many Mendelian disorders occur more frequently in cer-tain groups. African Americans are at increased risk of sickle cell disease, the most common hemoglobinopathy in the United States. Approximately 8% of African Americans carry the sickle hemoglobin gene, which is also found with increased frequency in those of Mediterranean, Caribbean, Latin American, or Middle Eastern descent. Caucasians of Northern European descent are at increased risk of cystic fibrosis, with an estimated carrier percentage of 1 in 22. Tay-Sachs, Gaucher, and Niemann-Pick diseases occur with greater frequency in individuals of Ashkenazi Jewish descent. Other diseases associated with certain ethnic groups are β-thalassemia, found at increased frequency in individuals of Mediterranean origin and α-thalassemia in individuals of Asian origin.