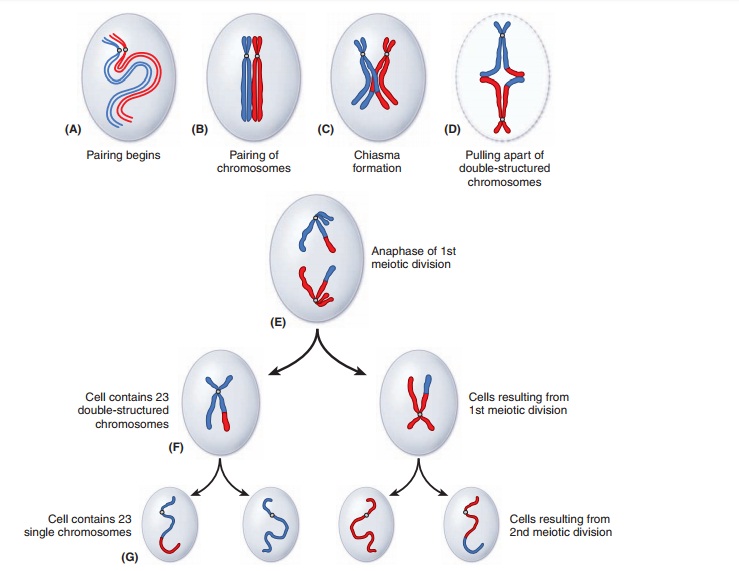 The genetic information in the human genome is packaged as chromatin, within which DNA binds with several chromosomal proteins to make chromosomes.

The genetic information in the human genome is packaged as chromatin, within which DNA binds with several chromosomal proteins to make chromosomes. A karyo-type reveals the morphology and number of chromo-somes. Somatic cells are all the cells in the human body that are not gametes (eggs or sperm). Germ cells, or gametes, contain a single set of chromosomes (n= 23) and are described as haploid in number. Somatic cells contain two sets of chromosomes, for a total of 46 chromosomes.These cells are diploid, signifying that they have a 2n chro-mosome complement (2n = 46). These chromosome pairs consist of 22 pairs of autosomes, which are similar in males and females. Each somatic cell also contains a pair of sex chromosomes. Females have two X sex chromosomes; males have an X and a Y chromosome.

Chromosomes undergo two types of replication, meiosis and mitosis, which are significantly different and produce cell types with crucially different capabilities. Mitosis is the replication of chromosomes in somatic cells. It is fol-lowed by cytokinesis, or cell division, that results in two daughter cells containing the same genetic information as the parent cell. Meiosis only occurs in germ cells. It is also followed by cytokinesis; but, in this case, cytokinesis results in four daughter cells with a haploid count.

Somatic cells undergo cell division based on the cell cycle. There are four stages of the cell cycle: G1, S, G2, and M. G1, or gap 1, occurs immediately after mitosis and is a period of inactivity with no DNA replication. During G1 all the DNA of each chromosome is present in the 2n form. The next phase is S, or synthesis, where the chromosomes double to become two identical sister chromatids with a 4n chromosome complement. During G2, or gap 2, the cells prepare for mitosis. G1, S, and G2 are also called inter-phase, which is the period between mitoses.

The goal of mitosis is to form two daughter cells that have a complete set of genetic information. Mitosis is divided into five stages: prophase, prometaphase, meta-phase, anaphase, and telophase. During prophase the chro-matin swells, or condenses, and the two sister chromatids are in close approximation. The nucleolus disappears, and the mitotic spindle develops. Spindle fibers start to form centrosomes, microtubule-organizing centers that migrate to the poles of the cell. In prometaphase the nuclear mem-brane vanishes and the chromosomes begin to disperse. They will eventually attach to the microtubules that form the mitotic spindle. Metaphase is the stage of maximal condensation. The chromosomes are in a linear formation in the center of the cell, between the two spindle poles. It is during metaphase where cells can most easily be analyzed to obtain a karyotype from an amniocentesis or chorionic villus sampling (CVS). Anaphase is initiated when the two chromatids separate. They form daughter chromosomes that are drawn to opposite poles of the cell by the spindle fibers. Finally, telophase is when the nuclear membrane starts to reform around the independent daughter cells, which then go into interphase (Fig. 7.1) 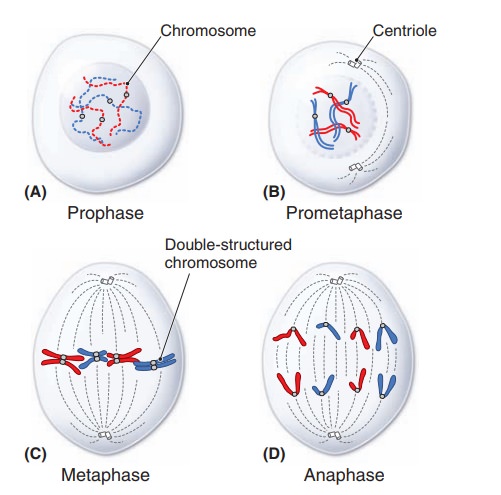 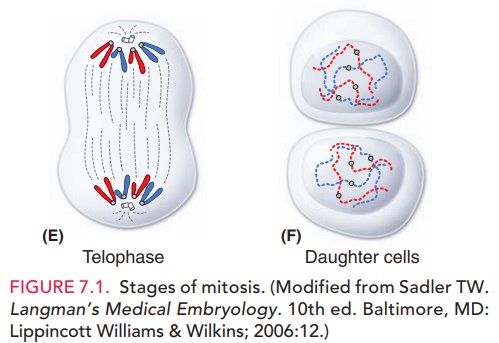 Meiosis differs from mitosis in that a haploid number ofcells are initially produced in two successive divisions. Thefirst division (meiosis I) istermed a reduction division, because of the resulting decrease in chromosome number from diploid to haploid. Meiosis I is also divided into four stages:prophase I, metaphase I, anaphase I, and telophase I. Prophase I is further divided into five substages: lep-totene, zygotene, pachytene, diplotene, and diakinesis. In prophase I the chromosomes condense and become shorter and thicker. It is during the pachytene substage that crossing over takes place, resulting in four distinct gametes. However, it is during anaphase where most of the genetic variation occurs. In anaphase I the chromosomes go to opposite poles of the cell by independent assort-ment, signifying that there are 223, or >8 million, possi-ble variations. Anaphase I is also the most error-prone stepin meiosis. The process ofdisjunction,where the chromo-somes go to opposite poles of the cell, can result in non-disjunction, where both chromosomes go instead to the same pole. Nondisjunction is a common cause of chromosomallyabnormal fetuses.

The second meiotic division (meiosis II) is similar tomitosis, except that the process occurs within a cell with a haploid number of chromosomes. Meiosis II is also divided into fourstages: prophase II, metaphase II, anaphase II, and telo-phase II. The result of meiosis II is four haploid daughter cells. After anaphase II, the possibilities for genetic varia-tion are further increased by 223× 223, ensuring genetic vari-ation (Fig. 7.2). 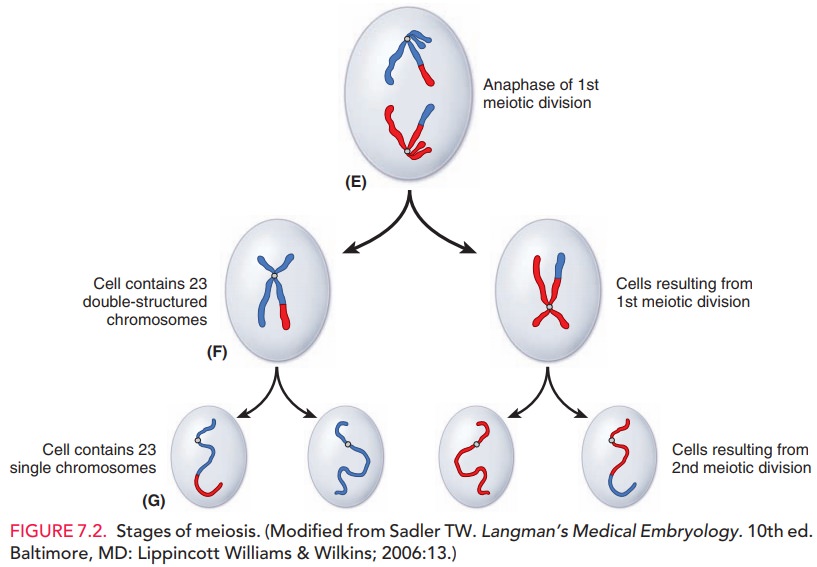