Each gene occupies a specific position, or locus, on a chro-mosome. At each locus, there are two possible variations of the genes, or two alleles.

Each gene occupies a specific position, or locus, on a chro-mosome. At each locus, there are two possible variations of the genes, or two alleles. If the phenotype of a disease is based on one allele in a gene pair, the gene is dominant. If the gene is located on an autosomal cell, its pattern of inher-itance is described as autosomal dominant. Individuals with one dominant allele for a disorder (described as being heterozygous for the gene) will express disease and trans-mit the gene to 50% of their offspring (Box 7.1). Examples of genetic disorders with autosomal dominant inheritance include Marfan syndrome, achondroplasia, and Hunting-ton disease. 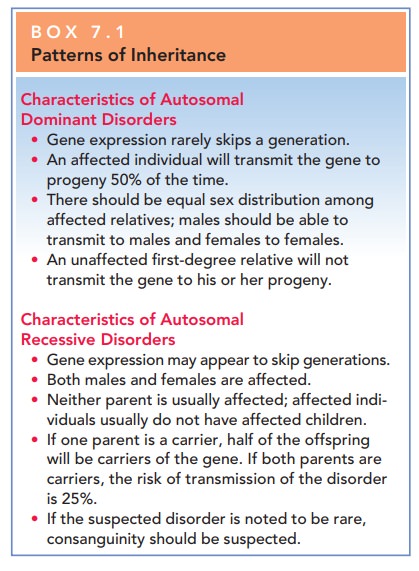 Phenotypic expression of autosomal dominant genes is not always straightforward and may vary depending on specific characteristics of the gene. Variable expressivity is the varying expression of a disease in an affected person. For example, some individuals with neurofibromatosis have only a few café au lait spots, whereas others have large tumors. Neurofibromatosis, however, demonstrates 100% penetrance. Penetrance describes the likelihood that a person carrying the gene will be affected. Retino-blastoma is an example of incomplete penetrance; not all affected individuals will express any obvious form of disease. Anticipation refers to an increase in severity and earlierexpression of disease with each subsequent generation. An example of a genetic mutation that shows anticipation is Huntington disease, where an expansion of the trinucleo-tide repeat, CAG, leads to earlier expression of the disease in affected offspring.