Morphology, culture, biochemical reactions, and other properties of R. rickettsiae are similar to those of other rick-ettsial pathogens. They are small intracellular bacteria, which multiply in the cytoplasm of the infected cells. They stain poorly with Gram stain, but stain well with Giemsa or Gimenez stain.

R. rickettsiae like other rickettsiae multiply within the endo-thelial cells of the small blood vessels and invade the blood streams. Subsequently, they cause vasculitis and vascular lesions, which are found in almost all organs but are com-monly found in the skin and in the adrenal glands, liver, heart, and CNS. The condition progresses to hypoalbunemia, hyponatremia, and hypovolemia due to loss of plasma into the tissues.

Incubation period is 7 days. The condition is characterized by development of fever, severe headache, chills, and myalgia. A rash may develop after three or more days and typically appears initially on wrist, ankles, and palms and soles and then spreads to the trunk. The rash is maculopapular early in the disease but may later become petechial and hemorrhagic.

This is a serious disease associated with many complica-tions, such as respiratory failure, encephalitis, and renal fail-ure. The patient may die within 5 days of onset of symptoms. The overall mortality rate is nearly 4% despite effective anti-biotic therapy. The deficiency of enzyme glucose-6-phosphate dehydrogenase (G6PD) is usually associated with more severity of infection.

Rocky Mountain spotted fever is distributed in southern Canada, Central America, Mexico, and parts of South America. R. rickettsiae, causing the condition, is the most common rick-ettsial pathogen in the United States.

R. rickettsiae is an intracellular pathogen of endothelial cellsand blood vessels of humans. The bacteria are also found in ticks. 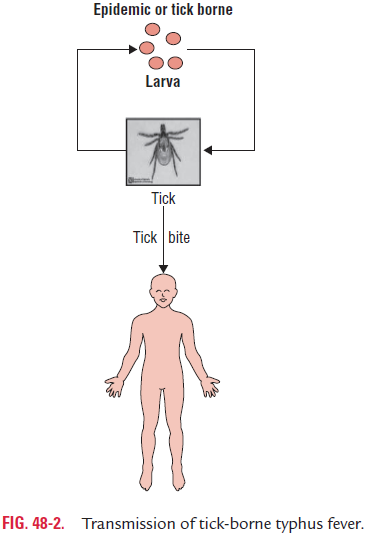 R. rickettsiae is transmitted to humans through saliva duringthe bite by a tick. It usually takes 6 hours of attachment and feeding before rickettsiae are transmitted to the host. Infection can also be transmitted occasionally by scratching and rubbing infectious tick feces into the abraded skin.

These include skin biopsy for antigen detection and serum for serodiagnosis.

R. rickettsiae can be isolated in embryonated egg or tissue cul-tures, but cultures are rarely attempted because of associated risk of infection.

Direct detection of R. rickettsiae in skin biopsy specimens of the rash from infected patients by direct fluorescent antibody test using the specific antirickettsial antibodies is a rapid and specific method for confirming diagnosis of Rocky Mountain spotted fever. This test is recommended for its use prior to therapy or within the first 48 hours after the antibiotic therapy.

The IFA is most commonly used test. This test uses group-specific heat-labile proteins and the LPS antigens of scrub typhus group. Therefore, the test is not species specific. The IFA is 95–100% sensitive and 100% specific. Demonstration of a fourfold rise in antibody titers between acute and convales-cent sera or demonstration of antibody titre of 1:64 or more in a single serum is diagnostic of the disease. These antibod-ies are detected in the serum 2–3 weeks after the onset of the disease and remain in the serum after a very long period of time.

Tetracyclines, chloramphenicol, and fluoroquinolones, such as ciprofloxacin are effective against R. rickettsiae.

The use of protective clothing and insect repellents and avoid-ance of tick-infested areas are preventive measures against R.rickettsiae infection. No vaccine is available against the RockyMountain spotted fever.