Rickettsiae are obligate, intracellular, very small (0.3 3 1–2 mm), Gram-negative bacilli that multiply within cytoplasm of eukary-otic cells. They have very small genome composed of 1–1.5 million base pairs. These organisms, because of their small size, were once thought to be viruses. Nevertheless, these organisms are bacteria because they show following characteristics:

·           They contain both DNA and RNA, enzymes for the Kreb’s cycle, and ribosomes for protein synthesis.

Rickettsiae are primary pathogens of arthropods, such as lice, fleas, ticks, and mites. In these hosts, they are found in their intestinal tract. They are usually transmitted to humans by arthropod vectors, such as lice, mites, ticks, etc. Coxiella burnetii causing Q fever is an exception, which is transmitted usually by airborne droplets. They also infect humans in whom they are found in the reticuloendothelial cells and vascular endothelium.

Rickettsiae are strict intracellular parasites, but their intracellular locations vary. Rickettsia and Orientia are free in cyto-plasm, whereas Coxiella and Ehrlichia are found in cytoplasmic vacuoles. These bacteria synthesize proteins and produce adenos-ine diphosphate by tricarboxylic acid cycle. The exact reason why these bacteria grow inside cells is not understood. It is suggested that these bacteria are energy parasites, which use ATP in host cell till it is available. They also use available host amino acids and host cell coenzyme A and nicotinamide adenine dinucleotide.

Cell wall of all the four genera is typical of Gram-negative bacteria. They have lipopolysaccharide (LPS) and peptidogly-can layer. The LPS shows weak endotoxic activity. The bacteria are nonmotile, they do not have any flagella, and instead are surrounded by a loose slime layer. Rickettsiae that cause human diseases are summarized in Table 48-1. 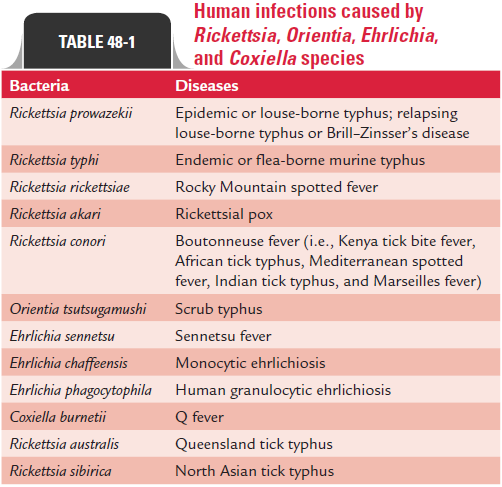