R. prowazekii is the causative agent of epidemic typhus, alsocalled louse-borne typhus. This condition is an acute febrile illness transmitted by human body louse Pediculus humanuscorporis. R. prowazekii is named after the scientist Von Prowazekwho died of the typhus fever while studying the disease. This typhus fever is an ancient disease and has been reported from all parts of the world. This disease was widely prevalent in Russia and in Eastern Europe. This disease was also respon-sible for Napolean’s defeat in Russia in 1812. This was one of the three diseases responsible for misery and sufferings during the Irish famine of 1845–1850.

R. prowazekii organisms like other rickettsiae are small, Gram-negative, intracellular bacteria. They stain poorly with Gram stain, but stain best with Giemsa or Gimenez stain. Like other rickettsiae, they can grow in various tissue cultures (HeLa, Hep2, Detriot-6, mouse fibroblasts, and other continuous cells lines) and in yolk sac of embryonated egg.

Like other rickettsiae, they are susceptible to various physical and chemical agents, as described earlier.

R. prowazekii is an invasive bacterium, which characteristicallymultiplies in endothelial cells of the blood vessels, leading to vasculitis.

The capability to multiply inside the cell is important mecha-nism of the disease process caused by R. prowazekii. Adhesins are the most important virulent factor of rickettsia. These are outer membrane proteins, which facilitate the entry of rick-ettsiae into the host cells. Once inside the cells, they remain, multiply, and accumulate in large numbers before lysing the host cell.

After inoculation from the infected sites, the rickettsiae reach the circulation, multiply, and cause rickettsemia. Rickettsiae are localized in the endothelial cells of small arterial capillary and venous vessels. At these sites, they multiply and cause endothelial cellular hyperplasia resulting in multiorgan vas-culitis. The process may end in thrombosis and development of small nodules. Thrombosis of supplying blood vessels may cause gangrene of the extremities, ear lobes, nose, and genitalia. The vasculitis process also may result in increased vascular permeability with consequent edema, loss of blood volume, hypoalbuminemia, reduced osmotic pressure, and hypotension.

Brill–Zinsser’s disease is an example of a recrudescent caseof typhus fever, which is observed in some people. The exact mechanism responsible for the recrudescence is not known.

Incubation period varies from as low as 2–3 days to an aver-age period of 8 days. Epidemic typhus is characterized by high fever, severe headache, and chills. Appearance of a petechial or macular rash on the fourth or fifth day—first starting on the trunk and then spreading over to the extremities but without affecting the face, palms, and sole—is the characteristic feature of the condition. This rash is seen in nearly 40% of patients.

The patient if left untreated may become stuporous and delirious. The name typhus is derived from the word “typhus”, meaning cloud or smoke, which denotes cloudy state of con-sciousness in the disease process. Myocarditis and central nervous system (CNS) dysfunction are the noted complications of epidemic typhus. The disease is associated with mortality rate as high as 60% in old or debilitated persons.

This condition was seen in some patients treated with antibiot-ics and has been apparently cured of the disease. R. prowazekii in such patients may persist in their body tissues, may reemerge, and cause a recurrence of typhus fever months, years, or even decades after antibiotic treatment. This condition is called recrudescent typhus. This disease was first noticed by Brill in 1988, and R. prowazekii were isolated from the areas in 1934. Hence, the disease is also called Brill–Zinsser disease.

Improper or incomplete antibiotic therapy, poor general health, and malnutrition are some of the risk factors that may predispose a person to recrudescence. The presentation of this disease is less severe and mortality is much lower than the epidemic typhus.

Epidemic typhus is a disease known since ancient times.

Epidemic typhus is present in Central and South America, Africa (Ethiopia and Nigeria), Northern China, and in India.

Humans are the primary reservoir of the epidemic typhus and are the sources of infection. The lice become infected with R. prowazekii after feeding on a person suffering from typhus fever or from Brill–Zinsser disease. Body louse, P. humanus corporis, is the arthropod vector of epidemictyphus. Occasionally, the head louse P. humanus capitis may transmit the infection, but not the pubic louse. R. prowazekii, the causative agent of typhus, lives and multiplies in the ali mentary tract of louse. The bacteria are excreted in feces within 3–5 days of infection. The lice are the only arthro-pod vector for rickettsial infection, which die after the infec-tion (Fig. 48-1). Infection is transmitted to humans when a rickettsia-harboring louse bites a human during a blood meal. 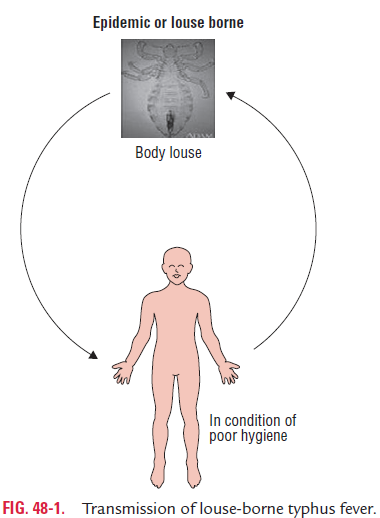 Typically, lice defecate while feeding. When the host scratches the bite, the louse is crushed and the contaminated louse feces are inoculated into the minute lesions of the bite wound. From the infected sites the rickettsiae reach the circu-lation, multiply, and cause rickettsemia. Rarely, infection may also be transmitted through the conjunctiva or through inhala-tion of aerosols of dry louse feces.

The disease epidemic typhus is much more common among people living in crowded and unhygienic conditions, which facilitate spread of the body lice from one person to another. Such condition is commonly seen during wars, famines, and natural disasters as people live closely together.

Diagnosis of rickettsial diseases, including epidemic typhus caused by R. prowazekii, is made by isolation of rickettsia in ani-mal models or by serological tests.

Rickettsiae are highly infectious pathogens; therefore, isolation of these pathogens from clinical specimens is carried out only in the laboratory equipped with high safety provision.

Rickettsiae may be isolated by growing in the cell culture. They grow better on Vero cells, in three and half days. The rickettsiae in these infected cell lines are identified by immunofluores-cence, using group-specific and strain-specific monoclonal antibodies.

Weil–Felix test: This is a heterologous agglutination testused since long for diagnosis of rickettsial infections. The test detects antirickettsial antibodies that cross-react with O anti-gens of certain nonmotile strains of Proteus. In this test, non-motile strains of Proteus vulgaris OX19 and OX2 and Proteusmirabilis OXK are used as antigens. The Weil–Felix test becomespositive 10–20 days after infection; sera from epidemic typhus strongly react with OX19 antigen and weakly agglutinate with OX2 antigen. They do not agglutinate with OXK antigen. Weil– Felix test is negative or weakly reactive in Brill–Zinsser disease. Reactions of Weil–Felix test in other rickettsial infections are summarized in Table 48-3.

Tetracycline and chloramphenicol are the drugs of choice for the treatment of epidemic typhus. Antibiotic therapy in combination with treatment of louse infestation of the human host is effective.

Control of human lice population and sanitation are the effec-tive measures to control epidemic typhus.