Riccia And The structure of mature gametophyte 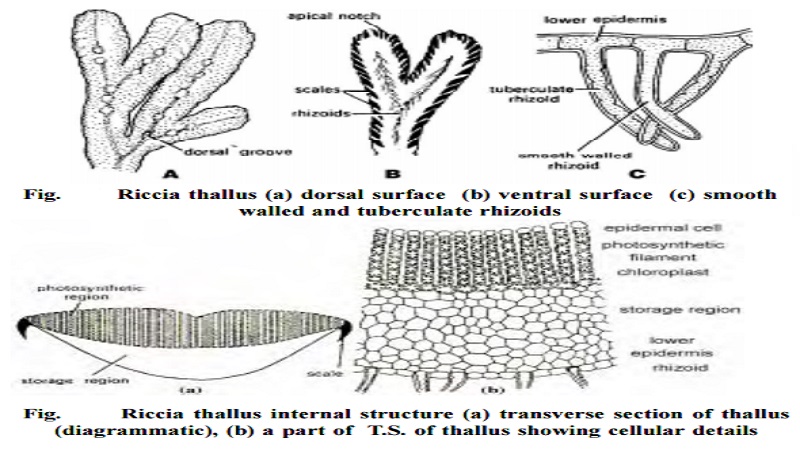 Riccia Class : Hepaticae Order : Marchantiales Family : Ricciaceae Genus : Riccia Riccia, which belongs to the family Ricciaceae is the single genus with 130 species.Riccia is more confined to damp and shady habitats. It can grow in water, plains and in hilly regions. It has an undifferentiated thallus and simple in structure.

Riccia, which belongs to the family Ricciaceae is the single genus with 130 species.Riccia is more confined to damp and shadyhabitats. It can grow in water, plains and in hilly regions. It has an undifferentiated thallus and simple in structure.

The following are some of the important species of Riccia, R. fluitans, R. gangetica, R. cruciata, R. kashyapii, R. discolor (this is also called as R. himalayensis). Of these,R. gangetica and R. fluitans are native of India. Excepting R. fluitans, the rest are land plants. R. fluitans is aquatic in nature and is found floating in stagnant waker reservoir.

Riccia thallus grow in large number in close association, covering the surface like a mat. They are relatively poorly adapted to life on land. So they are mainly confined to damp and shady places. The species of Riccia are terrestrial, nonvascular plants commonly called amphibians of plant kingdom.

The structure of mature gametophyte

Riccia has two generations namely, gametophytic and sporophytic. Gametophytic generation is dominant and independent. Sporophyte is dependent upon the gametotophyte.

The adult terrestrial gametophyte is prostrate, rosette-like dichotomously branched dorsiventral and deep green coloured plant found on suitable substratum of dampsoil. The dichotomous branching of the thallus is found quiet close to each other and thus arosette-like appearance is attained. Each and every branch of the thallus is more of less spoon shaped or rectangular in outline. A distinct longitudinal groove is found on the dorsal side of each branch of the thallus. The growing point is situated in the notch found between dichotomous branched thallus. Numerous scales and rhizoids are seen on the ventral surface of the thallus. The ventral surface bears a row of one celled thick, multicellular scales. They are arranged close to each other towards the apex of the branch. The older parts of the thallus bear two rows of scales.

The rhizoids absorb the nutrients and water from substratum, and in this way they perform the function of the roots. The rhizoids are of two types, i.e. smooth-walled and tuberculate. In each case the rhizoids are unicellular. They are absent in R. fluitans (aquatic species).

Internal structure of the thallus

The cross section of the thallus shows simple tissue arrangement. Two regions are distinctly seen. The dorsal region is capable of food preparation. It is provided with chlorophyllous tissues and the ventral region is storage in function as it contains parenchyma tissue which is colourless. However, the inter cellular spaces are absent and the cells are filled up with starch grains. From the single layered epidermis formed by the compactly arranged storage tissues several unicellular rhizoids (smooth walled or tuberculate) and muticellular scales are given out.

The dorsal region of the thallus consists of chlorophyllous cells. These cells with distinct chloroplasts in them are are arranged in vertical rows. There are regular air canals in between the two vertical rows of the chlorophyllous cells and this region is photosynthetic and synthesise carbohydrates. The epidermis of the dorsal surface of the thallus is discontinuous and open outside at several places by the opening of air canals. The epidermis is single layered. The exchange of gases takes place through the air canals.