A process is said to be reversible if it can be reversed without leaving any trace on the surroundings.

A process is said to be reversible if it can be reversed without leaving any trace on the surroundings.

For example, let a system be taken from state 1 to state 2 with a work transfer of +5 kJ and heat transfer of -10 kJ. If the process is reversible, while taking the system from state 2 to state 1, the work transfer must be -5 kJ and heat transfer must be +10 kJ. So that, both the system and surroundings are returned to their initial states at the end of the process 2 to 1.

a) Friction           :   Friction occurs at the interface of two bodies moving relative to each other. It

is  the  main  cause  of  irreversibility  in  many  processes.  Energy  spent  in

b) Heat transfer:    Once heat is transferred from a body at higher temperature to a  body at lower

temperature, it can never be reversed without the aid of an external agency.

c) Unresisted expansion: Consider a vessel with two chambers as given in the arrangement as shown in Fig. 4.6. If the members separating the gas from vacuum is removed, gas will expand and occupy the entire space. Since the expansion has no influence on the surroundings, there is no work output in this process. But to restore the initial arrangement, a definite work input is required.

d) Mixing of two gases: Consider a vessel with two chambers, one with O2 and the other with N2. When the member separating O2 & N2 is removed, uniform mixing is taking place without any work output. But such a process cannot be reversed without any work input.

e) Throttling: It is a totally irreversible process. Gas or vapour will expand through a restricted passage with its pressure decreasing rapidly without any work output. Such an expansion cannot be reversed.

As mentioned earlier if no irreversibilities occur outside the system boundaries during the process, it is known as externally reversible.

If no irreversibilities occur within the boundary of the system during a process, it is known as internally reversible process. For such a process, the path of the reverse process will follow exactly that of the forward process in any property diagram.

In 1824, Nicholas Sadi Carnot proposed a classical ideal cycle consisting of four processes. All processes are individually reversible and hence the cycle as a whole is a reversible cycle. The processes that make up the Carnot cycle are :

The working substance is taken in a piston cylinder arrangement as given in Figure 4.8(a). Heat is added reversibly and isothermally from a high 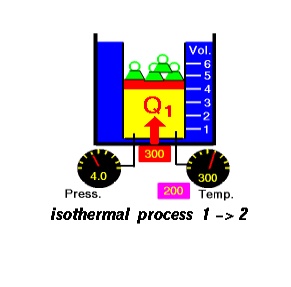 temperature reservoir at TH. Since the process is to be reversible, the temperature TH of the reservoir should be equal to or infinitesimally greater than that of the working substance. 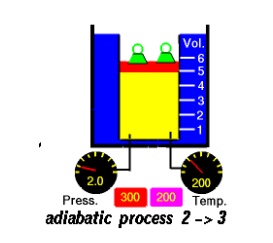 The working substance is allowed to expand reversibly and adiabatically until its temperature falls down to TL. The process is represented by Figure 4.8(b)

Heat is rejected by the working substance to a low temperature reservoir kept TL or at temperature infinitesimally smaller than TL.

reversibly and adiabatically until its temperature becomes TH and the cycle continues.

The cycle has been represented in a p-V diagram in Figure 4.9. The included area represents the net work done in the cycle. From first law of thermodynamics net workdone is equal to net heat transfer in the cycle. Since QH is the heat added to system and QL is the heat rejected by the system, the neat heat 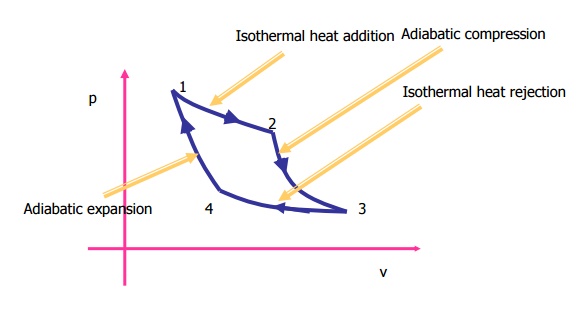 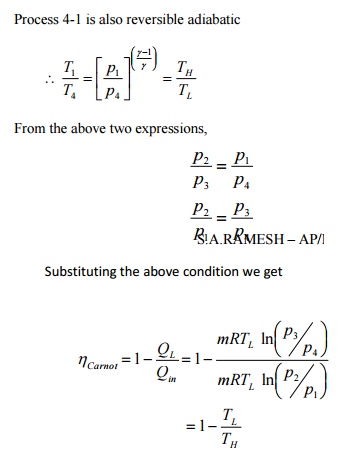 It shows that efficiency of carnot engine is purely a function of TH and TL.