The energy content of a system can be divided into two parts: · Available energy, which under ideal conditions may be completely converted into work · Unavailable energy which is usually rejected as waste.

From second law of thermodynamics we found that complete conversion of heat into work is not possible in a continuous process. Also it has been proved that the most efficient cycle to produce work is a reversible power cycle (Carnot cycle). Even in carnot cycle, the efficiency of conversion can never be

unity and hence to establish a comparison of the work-energy conversion in actual processes, the maximum theoretical work obtainable with respect to some datum must be determined. This chapter is dedicated for this objective.

·  Available energy, which under ideal conditions may be completely converted into work

·  Unavailable energy which is usually rejected as waste.

Consider Q units of heat energy available at a temperature T. Available part of energy can be obtained by assuming that the heat is supplied to a Carnot engine. Work obtained from the carnot engine

quantities can be represented as shown in the fig 6.1. The term T0 is the ambient temperature. Hence it can be concluded that the available and unavailable part of energy content of a system depends on the ambient conditions also.

Reversible Work In A Non-flow Process

From first law of thermodynamics

From second law of thermodynamics for a reversible process 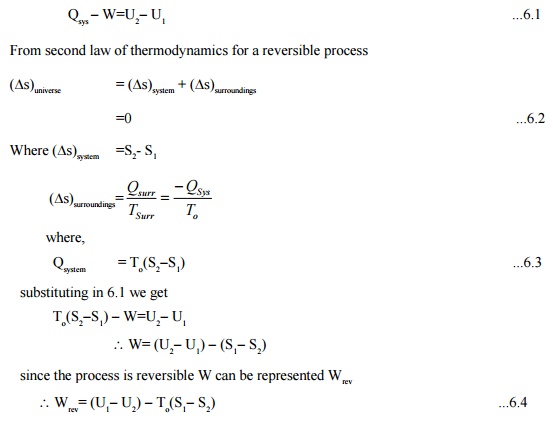 This is also the maximum work in the process.

For a closed system, when undergoing change in volume, the work done against the atmospheric pressure:

Steady flow energy equation for a constant volume is 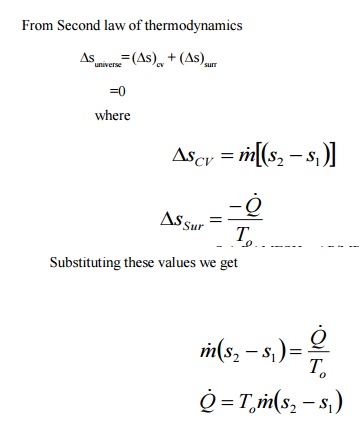 In an open system a fixed volume in space known as control volume is taken for analysis. Hence the atmospheric work term po(V1-V2) should not be considered. Therefore

Therefore for a closed system availability can be expressed as

similarly for an open system

In steady flow systems the exit conditions are assumed to be in equilibrium with the surroundings. The change in availability of a system when it moves from one state to another can be given as:

for a closed system

for an open system

Consider a system undergoing a change of state while interacting with a reservoir kept at TR and atmosphere at pressure po and temperature To. Net heat transfer to the system 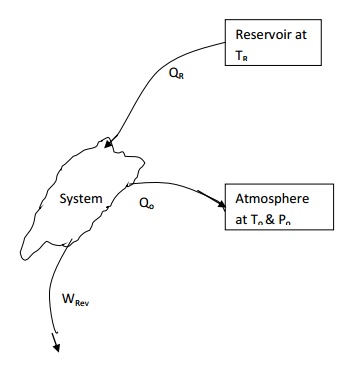 From first law of thermodynamics

From second law of thermodynamics, assuming the process to be reversible

The negative sign for QR shows that the heat is removed from the reservoir.

By rearranging We get 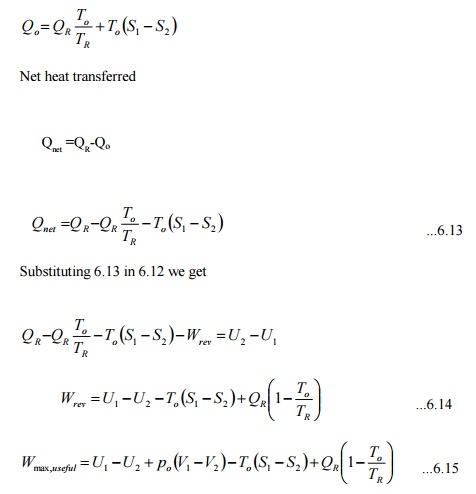 Let a stationary closed system receiving Q kJ of heat is giving out Wact kJ of work. From first law of thermodynamics. 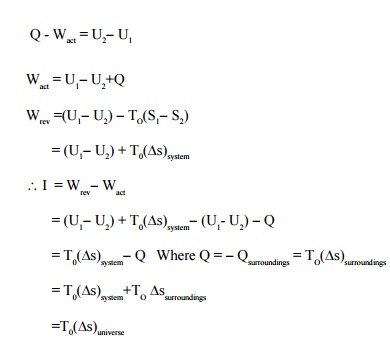 Since (Ds)universe will be positive for an irreversible flow, irreversibility will be zero for a reversible process and will never be negative

Similarly for a steady flow system 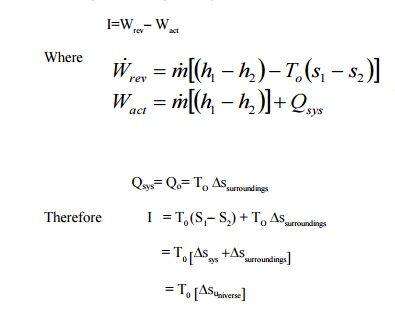