The use of peripheral nerve stimulators to moni-tor neuromuscular function is discussed already.

The use of peripheral nerve stimulators to moni-tor neuromuscular function is discussed already. Four patterns of electrical stimula-tion with supramaximal square-wave pulses are considered:

The occurrence of fade, a gradual diminution of evoked response during prolonged or repeated nerve stimulation, is indicative of a nondepolar-izing block (Table 11–2), or of a phase II block if only succinylcholine has been administered. Fade may be due to a prejunctional effect of nondepolar-izing relaxants that reduces the amount of ACh in the nerve terminal available for release during stim-ulation (blockade of ACh mobilization). Adequate clinical recovery correlates well with the absence of fade. Because fade is more obvious during sustained tetanic stimulation or double-burst stimulation than following a train-of-four pattern or repeated twitches, the first two patterns are the preferred methods for determining adequacy of recovery from a nondepolarizing block. 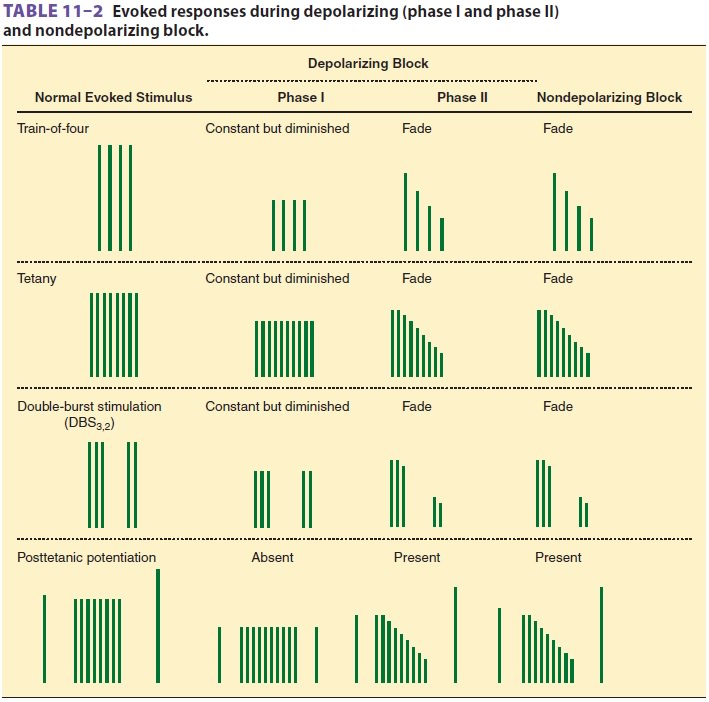 The ability of tetanic stimulation during a par-tial nondepolarizing block to increase the evoked response to a subsequent twitch is termed postte-tanic potentiation. This phenomenon may relate to a transient increase in ACh mobilization following tetanic stimulation.

In contrast, a phase I depolarization block from succinylcholine does not exhibit fade during tetanus or train-of-four; neither does it demonstrate postte-tanic potentiation. With longer infusions of suc-cinylcholine, however, the quality of the block will sometimes change to resemble a nondepolarizing block (phase II block).

Newer quantitative methods of assessment of neuromuscular blockade, such as acceleromyog-raphy, permit determination of exact train-of-four ratios, as opposed to subjective interpretations. Acceleromyography may reduce the incidence of unexpected postoperative residual neuromuscularblockade.