In contrast to depolarizing muscle relaxants, there is a wide selection of nondepolarizing muscle relaxants ( Tables 11–6 and 11–7). Based on their chemical structure, they can be classified as benzyl-isoquinolinium, steroidal, or other compounds. It is often said that choice of a particular drug depends on its unique characteristics, which are often related to its structure; however, for most patients, the dif-ferences among the intermediate-acting neuro-muscular blockers are inconsequential. In general, steroidal compounds can be vagolytic, but this prop-erty is most notable with pancuronium and clini-cally unimportant with vecuronium or rocuronium. Benzylisoquinolines tend to release histamine. Because of structural similarities, an allergic history to one muscle relaxant strongly suggests the possi-bility of allergic reactions to other muscle relaxants, particularly those in the same chemical class. 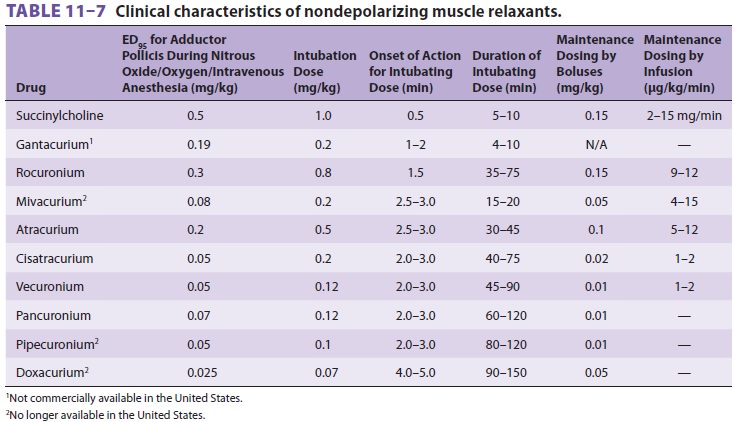 A. Suitability for Intubation

None of the currently available nondepolarizing muscle relaxants equals succinylcholine’s rapid onset of action or short duration. However, the onset of nondepolarizing relaxants can be quick-ened by using either a larger dose or a priming dose. The ED95 of any drug is the effective dose of a drug in 95% of individuals. For neuromuscular block-ers, one often specifies the dose that produces 95% twitch depression in 50% of individuals. One to two times the ED95 or twice the dose that produces 95% twitch depression is usually used for intubation. Although a larger intubating dose speeds onset, it exacerbates side effects and prolongs the duration of blockade. For example, a dose of 0.15 mg/kg of pancuronium may produce intubating condi-tions in 90 sec, but at the cost of more pronounced tachycardia—and a block that may be irreversible (by neostigmine) for more than 60 min. The conse-quence of a long duration of action is the ensuing difficulty in completely reversing the blockade and a subsequent increased incidence of postoperative pulmonary complications. As a general rule, the more potent the nondepolarizing muscle relax-ant, the slower its speed of onset; the “explana-tory dogma” is that greater potency necessitates a smaller dose, with fewer total drug molecules, which in turn, decreases the rate of drug binding opportunities at the neuromuscular junction.

The introduction of short- and intermediate-acting agents has resulted in the greater use of priming doses. Theoretically, giving 10% to 15% of the usual intubating dose 5 min before induction will occupy enough receptors so that paralysis will quickly follow when the balance of relaxant is administered. Use of a priming dose can produce conditions suitable for intubation as soon as 60 sec following administra-tion of rocuronium or 90 sec following administra-tion of other intermediate-acting nondepolarizers. A priming dose does not usually lead to clinically significant paralysis, which requires that 75% to 80% of the receptors be blocked (a neuromuscular mar-gin of safety). In some patients, however, the prim-ing dose produces distressing dyspnea, diplopia, or dysphagia; in such instances, the patient should be reassured, and induction of anesthesia should pro-ceed without delay. Priming can additionally cause measureable deterioration in respiratory function (eg, decreased forced vital capacity) and may lead to oxygen desaturation in patients with marginal pul-monary reserve. These negative side effects are more common in older, sicker patients.

Muscle groups vary in their sensitivity to muscle relaxants. For example, the laryngeal muscles—whose relaxation is important during intubation—recover from blockade more quickly than the adductor pollicis, which is commonly mon-itored by the peripheral nerve stimulator.

B. Suitability for Preventing Fasciculations

To prevent fasciculations and myalgias, 10% to 15% of a nondepolarizer intubating dose can be administered 5 min before succinylcholine. When administered only shortly before succinylcholine, myalgias, but not fasciculations, will be inhibited. Although most nondepolarizers have been suc-cessfully used for this purpose, tubocurarine and rocuronium have been most popular (precurari-zation); tubocurarine is no longer available in the United States.

Following intubation, muscle paralysis may need to be maintained to facilitate surgery, (eg, abdominal operations), to permit a reduced depth of anesthe-sia, or to control ventilation. There is great variabil-ity among patients in response to muscle relaxants. Monitoring neuromuscular function with a nerve stimulator helps to prevent over- and underdos-ing and to reduce the likelihood of serious residual muscle paralysis in the recovery room. Maintenance doses, whether by intermittent boluses or con-tinuous infusion (Table 11–7), should be guided by the nerve stimulator and clinical signs (eg, spontaneous respiratory efforts or movement). In some instances, clinical signs may precede twitch recovery because of differing sensitivities to mus-cle relaxants between muscle groups or technical problems with the nerve stimulator. Some return of neuromuscular transmission should be evident prior to administering each maintenance dose, if the patient needs to resume spontaneous ventila-tion at the end of the anesthetic. When an infusion is used for maintenance, the rate should be adjusted at or just above the rate that allows some return of neuromuscular transmission so that drug effects can be monitored.

E. Potentiation by Other Nondepolarizers

Some combinations of nondepolarizers produce a greater than additive (synergistic) neuromuscular blockade. The lack of synergism (ie, the drugs are only additive) by closely related compounds (eg, vecuronium and pancuronium) lends credence to the theory that synergism results from slightly dif-fering mechanisms of action.

In clinical doses, the nondepolarizers differ in their relative effects on nicotinic and muscarinic choliner-gic receptors. Some older agents (tubocurarine and, to a lesser extent, metocurine) blocked autonomic ganglia, reducing the ability of the sympathetic ner-vous system to increase heart contractility and rate in response to hypotension and other intraoperative stresses. In contrast, pancuronium (and gallamine) block vagal muscarinic receptors in the sinoatrial node, resulting in tachycardia. All newer nondepo-larizing relaxants, including atracurium, cisatracu-rium, vecuronium, and rocuronium, are devoid of significant autonomic effects in their recommended dosage ranges

Histamine release from mast cells can result in bronchospasm, skin flushing, and hypotension from peripheral vasodilation. Both atracurium and miva-curium are capable of triggering histamine release, particularly at higher doses. Slow injection rates and H1 and H2 antihistamine pretreatment ameliorate these side effects.

Only pancuronium and vecuronium are metab-olized to any significant degree by the liver. Active metabolites likely contribute to their clini-cal effect. Vecuronium and rocuronium depend heavily on biliary excretion. Clinically, liver failure prolongs pancuronium and rocuronium block-ade, with less effect on vecuronium, and no effect on pipecuronium. Atracurium, cisatracurium, and mivacurium, although extensively metabolized, depend on extrahepatic mechanisms. Severe liver disease does not significantly affect clearance of atra-curium or cisatracurium, but the associated decrease in pseudocholinesterase levels may slow the metabo-lism of mivacurium.

Doxacurium, pancuronium, vecuronium, and pipecuronium are partially excreted by thekidneys, and their action is prolonged in patients with renal failure. The elimination of atracurium, cisatracurium, mivacurium, and rocuronium is independent of kidney function.