The only depolarizing muscle relaxant in clinical usetoday is succinylcholine.

The only depolarizing muscle relaxant in clinical usetoday is succinylcholine. 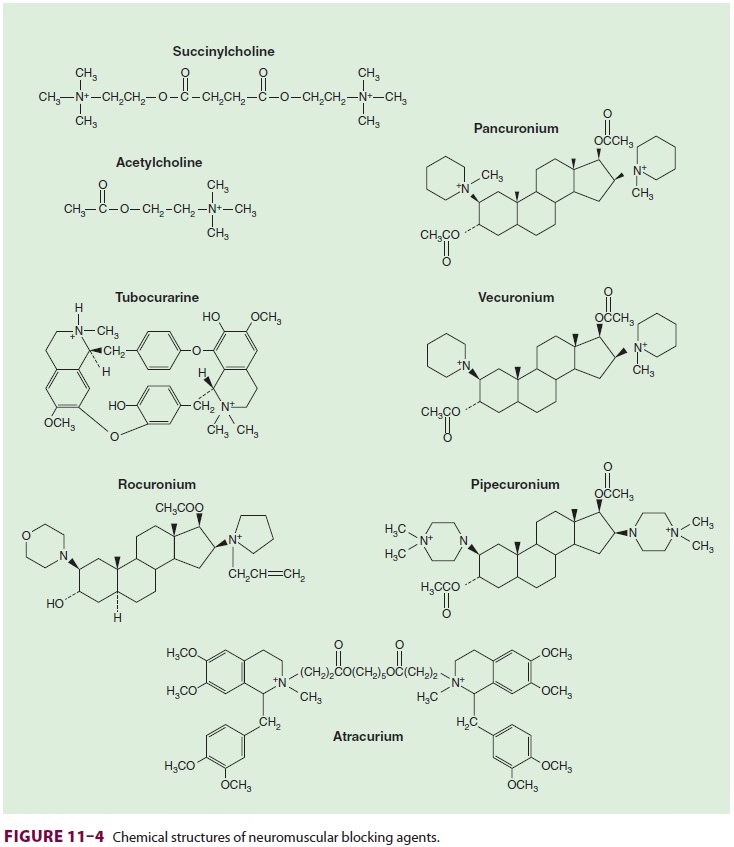 One in 25-30 patients of European extraction is a heterozygote with one normal and one abnormal (atypical) pseudocholinesterase gene, resulting in a slightly prolonged block (20–30 min). Even fewer (1 in 3000) patients have two copies of the most prevalent abnormal gene (homozygous atypical) that produce an enzyme with little or no affinity for succinylcholine. In contrast to the doubling or tripling of blockade duration seen in 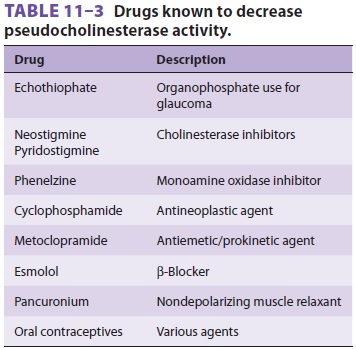 patients with low enzyme levels or heterozygous atypical enzyme, patients with homozygous atypi-cal enzyme will have a very long blockade (eg, 4–8 h) following administration of succinylcholine. Of the recognized abnormal pseudocholinesterase genes, the dibucaine-resistant (variant) allele, which produces an enzyme with 1/100 of normal affinity for succinylcholine, is the most common. Other variants include fluoride-resistant and silent (no activity) alleles.

The effects of muscle relaxants can be modified by concurrent drug therapy (Table 11–4). Succinyl-choline is involved in two interactions deserving special comment. 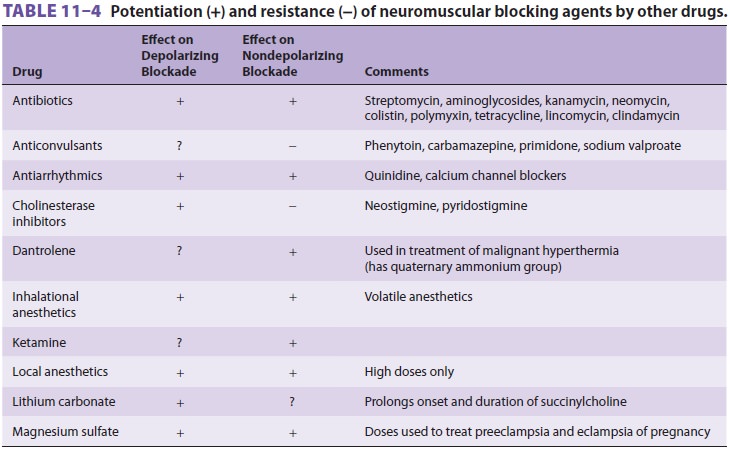 Although cholinesterase inhibitors reverse non-depolarizing paralysis, they markedly prolong a depolarizing phase I block by two mechanisms. By inhibiting acetylcholinesterase, they lead to a higher ACh concentration at the nerve terminal, which intensifies depolarization. They also reduce the hydrolysis of succinylcholine by inhibiting pseu-docholinesterase. Organophosphate pesticides, for example, cause an irreversible inhibition of acetyl-cholinesterase and can prolong the action of succi-nylcholine by 20–30 min. Echothiophate eye drops, used in the past for glaucoma, can markedly prolong succinylcholine by this mechanism.

In general, small doses of nondepolarizing relaxants antagonize a depolarizing phase I block. Because the drugs occupy some ACh receptors, depolarization by succinylcholine is partially prevented.

If enough depolarizing agent is administered to develop a phase II block, a nondepolarizer will potentiate paralysis.

Because of the rapid onset, short duration, and low cost of succinylcholine, many clinicians believethat it is still a good choice for routine intubation in adults. The usual adult dose of succinylcholine for intubation is 1–1.5 mg/kg intravenously. Doses as small as 0.5 mg/kg will often provide accept-able intubating conditions if a defasciculating dose of a nondepolarizing agent is not used. Repeated small boluses (10 mg) or a succinylcholine drip (1 g in 500 or 1000 mL, titrated to effect) can be used during surgical procedures that require brief but intense paralysis (eg, otolaryngological endos-copies). Neuromuscular function should be fre-quently monitored with a nerve stimulator to prevent overdosing and to watch for phase II block. The availability of intermediate-acting nondepolar-izing muscle relaxants has reduced the popularity of succinylcholine infusions. In the past, these infu-sions were a mainstay of ambulatory practice in the United States.

Because succinylcholine is not lipid soluble, it has a small volume of distribution. Per kilogram, infants and neonates have a larger extracellular space than adults. Therefore, dosage requirements for pediatric patients are often greater than for adults. If succinylcholine is administered intramuscularly to children, a dose as high as 4–5 mg/kg does not always produce complete paralysis.

Succinylcholine should be stored under refrig-eration (2–8°C), and should generally be used within 14 days after removal from refrigeration and exposure to room temperature.

Succinylcholine is a relatively safe drug—assuming that its many potential complications are understood and avoided. Because of the risk of hyperkalemia, rhabdomyolysis, and cardiacarrest in children with undiagnosed myopathies, succinylcholine is considered relatively contraindi-cated in the routine management of children and adolescent patients. Most clinicians have also aban-doned the routine use of succinylcholine for adults. Succinylcholine is still useful for rapid sequence induction and for short periods of intense paralysis because none of the presently available nondepolar-izing muscle relaxants can match its very rapid onset and short duration

Succinylcholine not only stimulates nicotinic cholinergic receptors at the neuromuscular junc-tion, it stimulates all ACh receptors. The cardio-vascular actions of succinylcholine are therefore very complex. Stimulation of nicotinic receptors in parasympathetic and sympathetic ganglia, and mus-carinic receptors in the sinoatrial node of the heart, can increase or decrease blood pressure and heart rate. Low doses of succinylcholine can produce neg-ative chronotropic and inotropic effects, but higher doses usually increase heart rate and contractil-ity and elevate circulating catecholamine levels. In most patients, the hemodynamic consequences are inconsequential in comparison to the effects of the induction agent and laryngoscopy.

Children are particularly susceptible to pro-found bradycardia following administration of succinylcholine. Bradycardia will sometimes occur in adults when a second bolus of succinylcholine is administered approximately 3–8 min after the first dose. The dogma (based on no real evidence) is that the succinylcholine metabolite, succinyl-monocholine, sensitizes muscarinic cholinergic receptors in the sinoatrial node to the second dose of succinylcholine, resulting in bradycardia. Intravenous atropine (0.02 mg/kg in children, 0.4 mg in adults) is normally given prophylacti-cally to children prior to the first and subsequent doses, and usually before a second dose of succi-nylcholine is given to adults. Other arrhythmias, such as nodal bradycardia and ventricular ectopy, have been reported.

The onset of paralysis by succinylcholine is usually signaled by visible motor unit contractions called fasciculations. These can be prevented by pretreat-ment with a small dose of nondepolarizing relax-ant. Because this pretreatment usually antagonizes a depolarizing block, a larger dose of succinyl-choline is required (1.5 mg/kg). Fasciculations are typically not observed in young children and elderly patients.

Normal muscle releases enough potassium during succinylcholine-induced depolarization to increase serum potassium by 0.5 mEq/L. Although this is usually insignificant in patients with normal baseline potassium levels, it can be life-threatening in patients with preexisting hyperkale-mia. The increase in potassium in patients with burn injury, massive trauma, neurological disorders, and several other conditions (Table 11–5) can be large and catastrophic. Hyperkalemic cardiac arrest can prove to be quite refractory to routine cardiopul-monary resuscitation, requiring calcium, insulin, glucose, bicarbonate, and even cardiopulmonary bypass to support the circulation while reducing serum potassium levels. 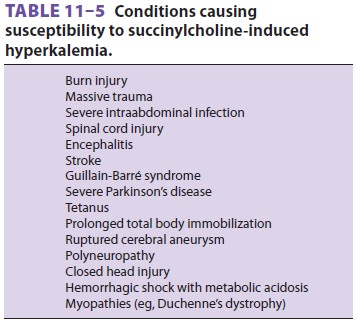 Following denervation injuries (spinal cord injuries, larger burns), the immature isoform of the ACh receptor may be expressed inside and out-side the neuromuscular junction (up-regulation). These extrajunctional receptors allow succinylcho-line to effect widespread depolarization and exten-sive potassium release. Life-threatening potassium release is not reliably prevented by pretreatment with a nondepolarizer. The risk of hyperkalemia usually seems to peak in 7–10 days following the injury, but the exact time of onset and the duration of the risk period vary. The risk of hyperkalemia from succinyl-choline is minimal in the first 2 days after spinal cord or burn injury.

Patients who have received succinylcholine have an increased incidence of postoperative myal-gia. The efficacy of nondepolarizing pretreatment is controversial. Administration of rocuronium (0.06–0.1 mg/kg) prior to succinylcholine has been reported to be effective in preventing fasciculations and reducing postoperative myalgias. The relation-ship between fasciculations and postoperative myal-gias is also inconsistent. The myalgias are theorized to be due to the initial unsynchronized contraction of muscle groups; myoglobinemia and increases in serum creatine kinase can be detected following administration of succinylcholine. Perioperativeuse of nonsteroidal antiinflammatory drugs may reduce the incidence and severity of myalgias.

Abdominal wall muscle fasciculations increase intragastric pressure, which is offset by an increase in lower esophageal sphincter tone. Therefore, despite being much discussed, there is no evidence that the risk of gastric reflux or pulmonary aspira-tion is increased by succinylcholine.

Extraocular muscle differs from other striated muscle in that it has multiple motor end-plates on each cell. Prolonged membrane depolarization and contraction of extraocular muscles follow-ing administration of succinylcholine transiently raise intraocular pressure and theoretically could compromise an injured eye. However, there is no evidence that succinylcholine leads to worsened outcome in patients with “open” eye injuries. The elevation in intraocular pressure is not always pre-vented by pretreatment with a nondepolarizing agent.

Succinylcholine transiently increases muscle tone in the masseter muscles. Some difficulty may ini-tially be encountered in opening the mouth because of incomplete relaxation of the jaw. A marked increase in tone preventing laryngoscopy is abnor-mal and can be a premonitory sign of malignant hyperthermia.

Patients afflicted with myotonia may develop myoc-lonus after administration of succinylcholine.

Succinylcholine may lead to an activation of the electroencephalogram and slight increases in cere-bral blood flow and intracranial pressure in some patients. Muscle fasciculations stimulate muscle stretch receptors, which subsequently increase cerebral activity. The increase in intracranial pres-sure can be attenuated by maintaining good airway control and instituting hyperventilation. It can also be prevented by pretreating with a nondepolarizing muscle relaxant and administering intravenous lido-caine (1.5–2.0 mg/kg) 2–3 min prior to intubation. The effects of intubation on intracranial pressure far outweigh any increase caused by succinylcholine, and succinylcholine is NOT contraindicated for rapid sequence induction of patients with intracra-nial mass lesions or other causes of increased intra-cranial pressure.

Slight histamine release may be observed following succinylcholine in some patients.