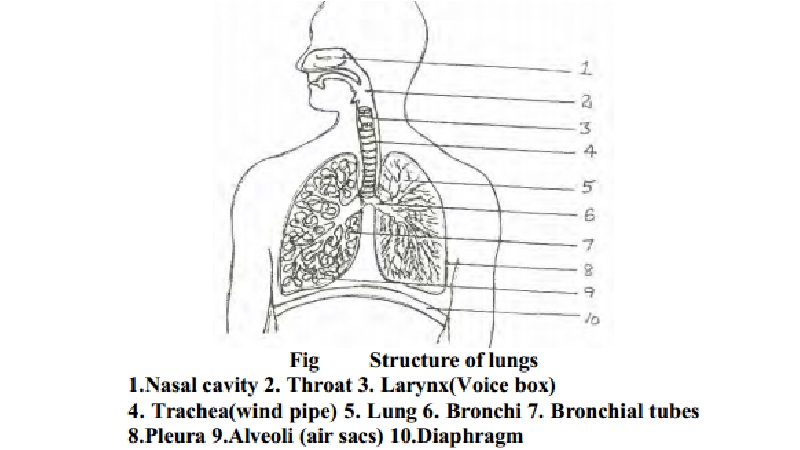 Inspiration is an active muscular contraction while expiration is merely a passive act of the relaxation of respiratory muscles.

The upper respiratory tract : Nose, Mouth, the throat, pharynx, the larynx, and

numerous sinus cavities in the head.

The lower respiratory tract : The trachea, the bronchi and the lungs, which contain bronchial tube bronchioles

and alveoli or air sac.

The two lungs, which are the principal organs of the respiratory system are situated in the upper part of the thoracic cage.

They are inert organs, i.e. they do not work by themselves, but function with the help of a muscular wall known as the diaphragm.

The pharynx is a tube approximately 12cm in length, which is a common opening for both digestive and respiratory system.

The epiglottis folds down over the opening like a trap door while food or liquid is being swallowed, it prevents the entry of foreign substances into the respiratory passage ways.

The closure of the epiglottis, when we swallow, is a reflex action and can be interfered with, if one attempts to talk and swallow at the same time.

If this happens one may choke to death in the absence of immediate assistance. From the pharynx, air passes through the trachea, which is 12cm long and 1.5cm in diameter. The tract, consists of a large number of C shaped cartilage rings. The larynx or the voice box is at the top of the trachea. It is the vocal cords inside the box, which by its coming together and going away from one another produces different sounds.

The trachea branches at its lower end into the right and left bronchi which enters the lungs. Within the lungs these passageways repeatedly divide, forming microscopic tubes called bronchioles.

Each bronchiole ends with several clusters of microscopic elastic air sacs called alveoli, which are the functional units of lungs. This resembles bunch of grapes.

The paired lungs lie within the large cavity of the chest, the thoracic cavity. The lungs are grayish colour and are spongy in appearance.

The right lungs has three lobes - upper, middle and lower, and the left lung has two lobes - upper and lower. The floor of the thoracic cavity is formed by a dome like muscular structure called diaphragm. Each lung is enclosed by two layers of membrane called the pleural membranes.

The chest cavity is also lined with this membrane. This layer being known as the parietal pleura, while visceral pleura lines the lung parenchyma.

We breathe continuously from birth to death, day and night, in health and disease.

Respiration may be defined as the mechanical process of breathing in and out, a function which involves both the respiratory system and muscles of the respiration.

The 2 phases of breathing are

Inhalation - during which the air is drawn into the lungs

Exhalation - which refers to the expulsion of air from the alveoli.

The diaphragm when relaxed is a flattened dome shape structure pointing upwards to the lungs. During the process of inhalation it contracts.

It flattens, pulls down the thorax, increases the volume of the thorax, and thus decreases the atmospheric pressure in the lungs. This causes air to rush in during inspiration.

During the process of exhalation, the diaphragm relaxes, the thorax is pushed up, the volume decreases and the atmospheric pressure increases and air rushes out of the lungs.

The inspired air, which contains oxygen, passes down into the billions of minute air chambers or air cells known as alveoli, which have very thin walls. Around these walls are the capillaries of the pulmonary system.

It is at this point that the fresh air gives off its oxygen to the blood and takes carbon di oxide from the blood by diffusion, which is then expelled with the expired air.

The diaphragm does not continue to work if it is cut off from its nerve supply. If one nerve is cut, the diaphragm of that side is paralysed. This center is governed by variation in the chemistry of the blood.

If there is an increase in CO2 in the blood, the cells of the respiratory center are stimulated and they in term send impulses down the phrenic nerve to the diaphragm.

By adjusting the amount of carbon-di-oxide elimination, it helps to maintain the acid base balance.

It helps to maintain the normal body temperature.

It is necessary for the maintenance of optimal oxidation-reduction process in the body.