Absorption of Food in Human Body 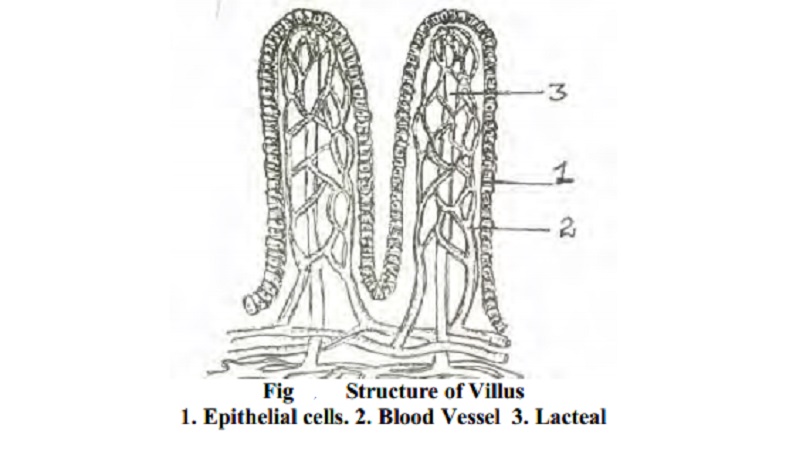 In the stomach there is little absorption. Water, alcohol, glucose and simple salts are absorbed to a certain degree. The main absorption occurs in small intestines especially in the lower (ileum) part, the upper part of the small intestine is mainly associated with the process of digestion.

The mucous membrane of small intestine is covered with minute finger like projections known as villi. Each villus contains arteriole, a venule, a capillary network and a lacteal (lymphatic vessel).

Nutrients that diffuse through the epithelial cells which covers the villus are able to pass through the capillary walls and the lacteal enters the blood.

About 90% of all absorption takes place throughout the length of the small intestine. The other 10% occurs in the stomach and large intestine.

Both monosaccharides and amino acids are absorbed by a positive pressure gradient between the intestinal content and the blood as well as by an active process involving enzymatic reactions and transported in the blood stream to the liver via the hepatic portal system.

Movements of the gastro intestinal tract

Deglutition is the process by which the masticated food is transported across the pharynx and reaches the stomach. Due

to contractile movements of the stomach, the food is well mixed up with gastric juice.

After being in the stomach for 3 or 4 hours the pyloric sphincter opens pushing the food into the duodenum.

The intestine shows three important types of movements. They are:

Pendular movement These movements are induced by contraction of the circular and longitudinal muscles of the intestine. This movement contributes to the thorough mixing of chyme with the digestive juice.

Segmental movement: This movement occurs by the contraction of the circular muscles, which produces transverse folds, dividing the intestine into short segment.

Peristaltic Movement: It is the wave like contraction of the alimentary canal, which propels the food through the gastro intestinal tract.