Diagnosis and treatment of most respiratory disor-ders depend heavily on understanding the basic physiologic principles of respiration and gas exchange.

Diagnosis and treatment of most respiratory disor-ders depend heavily on understanding the basic physiologic principles of respiration and gas exchange. Some respiratory diseases result from inadequate ventilation. Others result from abnor-malities of diffusion through the pulmonary mem-brane or abnormal blood transport of gases between the lungs and tissues. Therapy is often entirely different for these diseases, so it is no longer satisfactory simply to make a diagnosis of “respiratory insufficiency.”

In the previous, we have discussed a number of methods for study-ing respiratory abnormalities, including measuring vital capacity, tidal air, func-tional residual capacity, dead space, physiologic shunt, and physiologic dead space. This array of measurements is only part of the armamentarium of the clinical pulmonary physiologist. Some other interesting tools are described here.

Among the most fundamental of all tests of pulmonary performance are deter-minations of the blood PO2, CO2, and pH. It is often important to make these measurements rapidly as an aid in determining appropriate therapy for acute respiratory distress or acute abnormalities of acid-base balance. Several simple and rapid methods have been developed to make these measurements within minutes, using no more than a few drops of blood. They are the following.

Determination of Blood pH. Blood pH is measured using a glass pH electrode ofthe type used in all chemical laboratories. However, the electrodes used for this purpose are miniaturized. The voltage generated by the glass electrode is a direct measure of pH, and this is generally read directly from a voltmeter scale, or it is recorded on a chart.

Determination of Blood PO2. The concentration of oxygenin a fluid can be measured by a technique called polarography. Electric current is made toflowbetween a small negative electrode and the solution. If the voltage of the electrode is more than -0.6 volt different from the voltage of the solution, oxygen will deposit on the electrode. Furthermore, the rate of current flow through the electrode will be directly pro-portional to the concentration of oxygen (and there-fore to PO2 as well). In practice, a negative platinum electrode with a surface area of about 1 square mil-limeter is used, and this is separated from the blood by a thin plastic membrane that allows diffusion of oxygen but not diffusion of proteins or other sub-stances that will “poison” the electrode.

Often all three of the measuring devices for pH, CO2, and Po2 are built into the same apparatus, and all these measurements can be made within a minute or so using a single, droplet-size sample of blood. Thus, changes in the blood gases and pH can be followed almost moment by moment at the bedside.

In many respiratory diseases, particularly in asthma, the resistance to airflow becomes especially great during expiration, sometimes causing tremendous dif-ficulty in breathing. This has led to the concept called maximum expiratory flow, which can be defined asfollows: When a person expires with great force, the expiratory airflow reaches a maximum flow beyond which the flow cannot be increased any more even with greatly increased additional force. This is the maximum expiratory flow. The maximum expiratory flow is much greater when the lungs are filled with a large volume of air than when they are almost empty. These principles can be understood by referring to Figure 42–1. 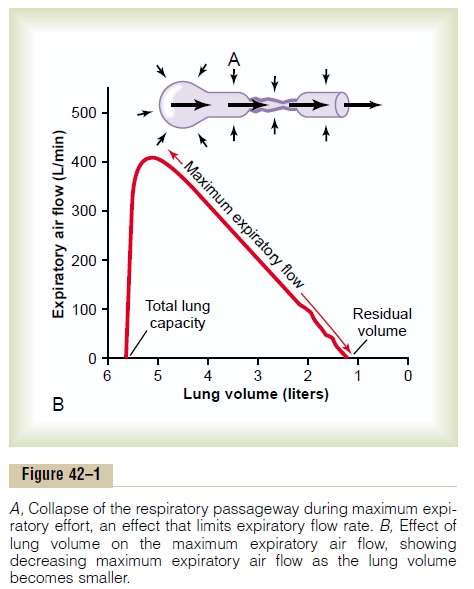 Figure 42–1A shows the effect of increased pressure applied to the outsides of the alveoli and air passage-ways caused by compressing the chest cage. The arrows indicate that the same pressure compresses the outsides of both the alveoli and the bronchioles. There-fore, not only does this pressure force air from the alveoli toward the bronchioles, but it also tends to collapse the bronchioles at the same time, which will oppose movement of air to the exterior. Once the bronchioles have almost completely collapsed, further expiratory force can still greatly increase the alveolar pressure, but it also increases the degree of bronchiolar collapse and airway resistance by an equal amount, thus preventing further increase in flow.

Therefore, beyond a critical degree of expiratory force, a maximum expiratory flow has been reached.

Note also that as the lung volume becomes smaller, the maximum expiratory flow rate also becomes less. The main reason for this is that in the enlarged lung the bronchi and bronchioles are held open partially by way of elastic pull on their outsides by lung structural elements; however, as the lung becomes smaller, these structures are relaxed, so that the bronchi and bron-chioles are collapsed more easily by external chest pressure, thus progressively reducing the maximum expiratory flow rate as well. 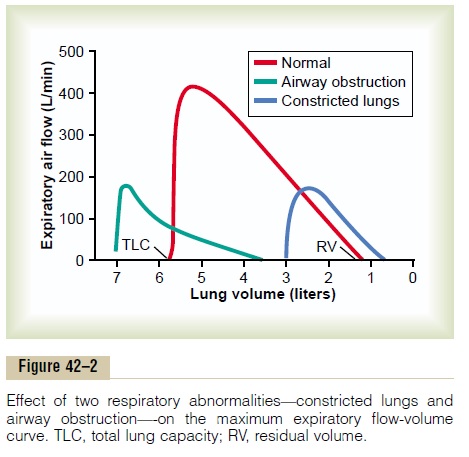 Furthermore, because the lung cannot expand to a normal maximum volume, even with the greatest pos-sible expiratory effort, the maximal expiratory flow cannot rise to equal that of the normal curve. Con-stricted lung diseases include fibrotic diseases of the lung itself, such as tuberculosis and silicosis, and dis-eases that constrict the chest cage, such as kyphosis, scoliosis, and fibrotic pleurisy.

In diseases with airway obstruction, it is usually much more difficult to expire than to inspire because the closing tendency of the airways is greatly increased by the extra positive pressure required in the chest to cause expiration. By contrast, the extra negative pleural pressure that occurs during inspiration actually “pulls” the airways open at the same time that it expands the alveoli. Therefore, air tends to enter the lung easily but then becomes trapped in the lungs. Over a period of months or years, this effect increases both the TLC and the RV, as shown by the green curve in Figure 42–2. Also, because of the obstruction of the airways and because they collapse more easily than normal airways, the maximum expiratory flow rate is greatly reduced.

Another exceedingly useful clinical pulmonary test, and one that is also simple, is to make a record on a spirometer of the forced expiratory vital capacity(FVC). Such a record is shown in Figure 42–3A for aperson with normal lungs and in Figure 42–3B for a person with partial airway obstruction. In performing the FVC maneuver, the person first inspires maximally to the total lung capacity, then exhales into the spirometer with maximum expiratory effort as rapidly and as completely as possible. The total distance of the downslope of the lung volume record represents the FVC, as shown in the figure. 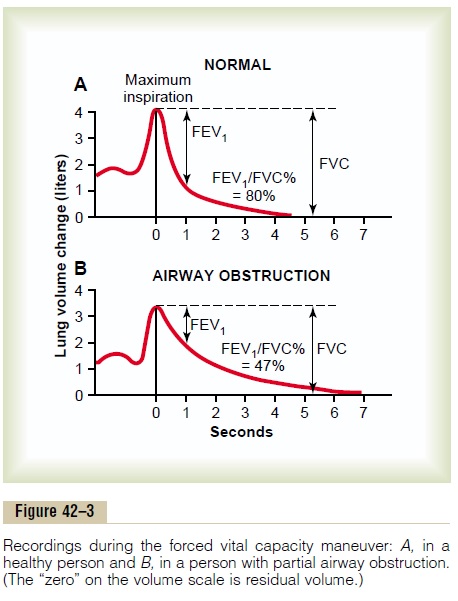 Now, study the difference between the two records(1) for normal lungs and (2) for partial airway obstruc-tion. The total volume changes of the FVCs are not greatly different, indicating only a moderate difference in basic lung volumes in the two persons. There is, however, a major difference in the amounts of air thatthese persons can expire each second, especially duringthe first second. Therefore, it is customary to compare the recorded forced expiratory volume during the first second (FEV1) with the normal. In the normal person (see Figure 42–3A), the percentage of the FVC that is expired in the first second divided by the total FVC (FEV1/FVC%) is 80 per cent. However, note in Figure 42–3B that, with airway obstruction, this value decreased to only 47 per cent. In serious airway obstruction, as often occurs in acute asthma, this can decrease to less than 20 per cent.