Almost any of the conditions discussed in the past few sections can cause serious degrees of bodywide cellular hypoxia.

Almost any of the conditions discussed in the past few sections can cause serious degrees of bodywide cellular hypoxia. Sometimes, oxygen therapy is of great value; other times, it is of moderate value; and, at still other times, it is of almost no value. Therefore, it is important to understand the different types of hypoxia; then we can discuss the physiologic principles of oxygen therapy. The following is a descriptive classification of the causes of hypoxia:

1.Inadequate oxygenation of the blood in the lungs because of extrinsic reasons

4.Inadequate oxygen transport to the tissues by the blood

b)             Diminished cellular metabolic capacity for using oxygen, because of toxicity, vitamin deficiency, or other factors

Inadequate Tissue Capability to Use Oxygen. The classiccause of inability of the tissues to use oxygen is cyanidepoisoning, in which the action of the enzyme cytochrome oxidase is completely blocked by thecyanide—to such an extent that the tissues simply cannot use oxygen even when plenty is available. Also, deficiencies of some of the tissue cellular oxidativeenzymes or of other elements in the tissue oxidativesystem can lead to this type of hypoxia. A special example occurs in the disease beriberi, in which several important steps in tissue utilization of oxygen and formation of carbon dioxide are compromised because of vitamin B deficiency.

Effects of Hypoxia on the Body. Hypoxia, if severe enough,can cause death of cells throughout the body, but in less severe degrees it causes principally (1) depressed mental activity, sometimes culminating in coma, and (2) reduced work capacity of the muscles.

Oxygen can be administered by (1) placing the patient’s head in a “tent” that contains air fortified with oxygen, (2) allowing the patient to breathe either pure oxygen or high concentrations of oxygen from a mask, or (3) administering oxygen through an intranasal tube.

Recalling the basic physiologic principles of the different types of hypoxia, one can readily decide when oxygen therapy will be of value and, if so, how valuable.

In hypoventilation hypoxia, a person breathing 100 per cent oxygen can move five times as much oxygen into the alveoli with each breath as when breathing normal air. Therefore, here again oxygen therapy can be extremely beneficial. (However, this provides no benefit for the excess blood carbon dioxide also caused by the hypoventilation.)

In hypoxia caused by impaired alveolar membranediffusion, essentially the same result occurs as inhypoventilation hypoxia, because oxygen therapy can increase the PO2 in the lung alveoli from the normal value of about 100 mm Hg to as high as 600 mm Hg. 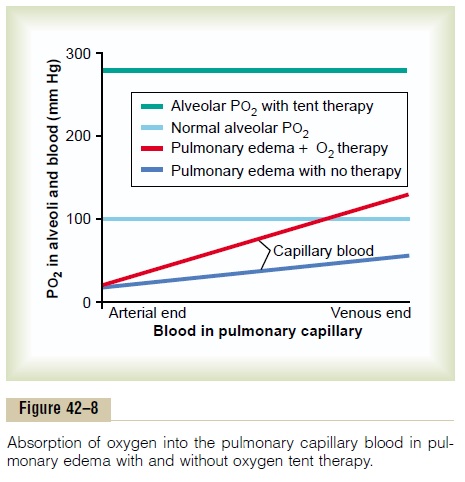 This raises the oxygen pressure gradient for diffusion of oxygen from the alveoli to the blood from the normal value of 60 mm Hg to as high as 560 mm Hg, an increase of more than 800 per cent. This highly ben-eficial effect of oxygen therapy in diffusion hypoxia is demonstrated in Figure 42–8, which shows that the pulmonary blood in this patient with pulmonary edema picks up oxygen three to four times as rapidly as would occur with no therapy.

In hypoxia caused by anemia, abnormal hemoglobintransport of oxygen, circulatory deficiency, or physio-logic shunt, oxygen therapy is of much less valuebecause normal oxygen is already available in the alveoli. The problem instead is that one or more of the mechanisms for transporting oxygen from the lungs to the tissues is deficient. Even so, a small amount of extra oxygen, between 7 and 30 per cent, can be trans-ported in the dissolved state in the blood when alveo-lar oxygen is increased to maximum even though the amount transported by the hemoglobin is hardly altered. This small amount of extra oxygen may be the difference between life and death.

In the different types of hypoxia caused by inade-quate tissue use of oxygen, there is abnormality neitherof oxygen pickup by the lungs nor of transport to the tissues. Instead, the tissue metabolic enzyme system is simply incapable of using the oxygen that is delivered. Therefore, oxygen therapy is of hardly any measura-ble benefit.

The term cyanosis means blueness of the skin, and its cause is excessive amounts of deoxygenated hemoglo-bin in the skin blood vessels, especially in the capil-laries. This deoxygenated hemoglobin has an intense dark blue-purple color that is transmitted through the skin.

In general, definite cyanosis appears whenever the arterial blood contains more than 5 grams of deoxy-genated hemoglobin in each 100 milliliters of blood. A person with anemia almost never becomes cyanotic because there is not enough hemoglobin for 5 grams to be deoxygenated in 100 milliliters of arterial blood. Conversely, in a person with excess red blood cells, as occurs in polycythemia vera, the great excess of avail-able hemoglobin that can become deoxygenated leads frequently to cyanosis, even under otherwise normal conditions.