The term pulmonary emphysema literally means excess air in the lungs. However, this term is usually used to describe complex obstructive and destructive process of the lungs caused by many years of smoking. It results from the following major pathophysiologic changes in the lungs:

1.     Chronic infection, caused by inhaling smoke orother substances that irritate the bronchi and bronchioles. The chronic infection seriously deranges the normal protective mechanisms of the airways, including partial paralysis of the cilia of the respiratory epithelium, an effect caused by nicotine. As a result, mucus cannot be moved easily out of the passageways. Also, stimulation of excess mucus secretion occurs, which further exacerbates the condition. Too, inhibition of the alveolar macrophages occurs, so that they become less effective in combating infection.

2.     The infection, excess mucus, and inflammatory edema of the bronchiolar epithelium together cause chronic obstruction of many of the smaller airways.

3.     The obstruction of the airways makes it especially difficult to expire, thus causing entrapment of 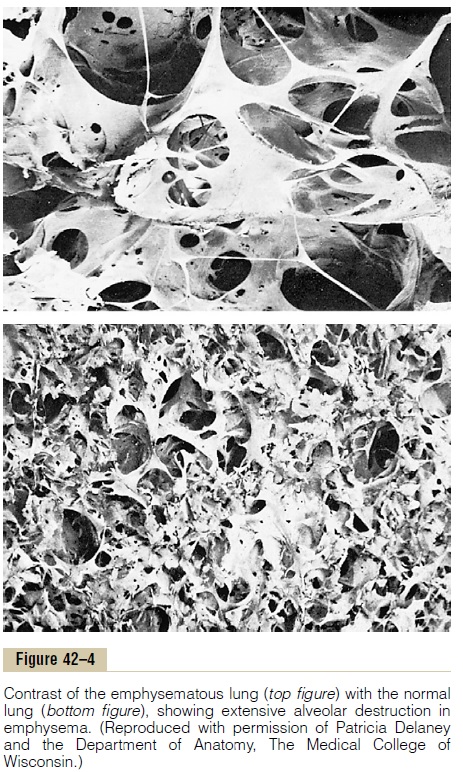 air in the alveoli and overstretching them. This,combined with the lung infection, causes markeddestruction of as much as 50 to 80 per cent of the alveolar walls. Therefore, thefinal picture of theemphysematous lung is that shown in Figures 42–4 (top) and 42–5.

The physiologic effects of chronic emphysema are extremely varied, depending on the severity of the disease and the relative degrees of bronchiolar ob-struction versus lung parenchymal destruction. Among the different abnormalities are the following:

2.     The marked loss of alveolar walls greatly decreases the diffusing capacity of the lung, whichreduces the ability of the lungs to oxygenate the blood and remove carbon dioxide from the blood.

3.     The obstructive process is frequently much worse in some parts of the lungs than in other parts,so that some portions of the lungs are well ventilated, while other portions are poorly ventilated. This often causes extremely abnormalventilation..-perfusion ratios, with a very low Va/Q in some parts (physiologic shunt), resultingin poor aeration of the blood, and very high Va/Q in other parts (physiologic dead space), resulting in wasted ventilation, both effects occurring in the same lungs.

4. Loss of large portions of the alveolar walls also decreases the number of pulmonary capillaries through which blood can pass. As a result, the pulmonary vascular resistance often increases markedly, causing pulmonary hypertension. This in turn overloads the right side of the heart and frequently causes right-sided heart failure.

Chronic emphysema usually progresses slowly over many years. The person develops both hypoxia and hypercapnia because of hypoventilation of many alveoli plus loss of alveolar walls. The net result of all these effects is severe, prolonged, devastatingairhunger that can last for years until the hypoxia andhypercapnia cause death—a high penalty to pay for smoking.