Requirements of a Good Railway Track

A permanent way or track should provide a comfortable and safe ride at the maximum permissible speed with minimum maintenance cost.

Requirements of a Good Railway Track

A permanent way or track should provide a comfortable and safe ride at the maximum permissible speed with minimum maintenance cost. To achieve these objectives, a sound permanent way should have the following characteristics.

(a)  The gauge should be correct and uniform.

(b) The rails should have perfect cross levels. In curves, the outer rail should have a proper superelevation to take into account the centrifugal force.

(c)  The alignment should be straight and free of kinks. In the case of curves, a proper transition should be provided between the straight track and the curve.

(e)  The track should be resilient and elastic in order to absorb the shocks and vibrations of running trains.

(f)  The track should have a good drainage system so that the stability of the track is not affected by waterlogging.

(g)  The track should have good lateral strength so that it can maintain its stability despite variations in temperature and other such factors.

(h) There should be provisions for easy replacement and renewal of the various track components.

(i)  The track should have such a structure that not only is its initial cost low, but also its maintenance cost is minimum.

Most of the railway lines on Indian Railways are single lines, generally with a formation 6.10 m (20 ft) wide for broad gauge and 4.8 m (16 ft) wide for metre gauge. The formation is generally stable except in areas where clayey soil or other types of shrinkable soils are found. Most of the track is straight except for 16% of the track on BG and MG and 20% of the track on NG, which is on curves. The maximum degree of curvature permissible is 10 o on the broad gauge, 16 o on the metre gauge, and 40 o on the narrow gauge.

The ballast used most often is broken stone ballast, but in some areas, sand, moorum, and coal ash have also been used. About a 20 cm to 30 cm (8" to 12") cushion of ballast is normally provided below the sleepers to transfer the load evenly and to impart the necessary resilience to the track.

The different materials used to construct sleepers are wood (31%), cast iron (42%), and steel (27%). Experience has shown that cast iron sleepers are not suitable for high-density routes. Prestressed concrete sleepers have recently been developed by Indian Railways and are proposed to be progressively laid on group A and B routes. Sleepers are laid to various sleeper densities varying from (M + 7) to (M + 4) or 1540 per km to 1310 per km depending upon the weight and volume of traffic. Here M stands for length of rail in metres. (M + 7) means 20 sleepers per rail length for BG and 19 sleepers per rail length for MG.

The rails standardized for Indian Railways are 60 kg and 52 kg for BG and 90 R, 75 R and 60 R, for MG (in 90 R, 75 R, etc., R stands for revised British specifications). Rails are normally rolled in 13 m (42 ft) lengths for BG lines and 12 m (39 ft) lengths for MG lines. The rails are welded together to form longer rails and are laid progressively on the track in order to reduce maintenance costs and noise levels and thereby provide more comfortable travel. The rails are welded in depots in three rail panels, normally by the flash-butt welding method, to form short welded rails (SWRs). Long welded rails (LWRs) are also being progressively introduced on various routes of Indian Railways. Thermit welding is normally done at the site to convert short welded rails into long welded rails. The fastenings used are mostly screw and rail spikes, keys, etc. In recent times, elastic fastenings such as elastic rail clips and IRN202 clips have also been standardized on Indian Railways.

The turnouts used are normally 1 in 8 5 for goods trains and 1 in 12 as well as 1 in 16 for passenger trains. 1 in 20 turnouts were also designed sometime back for permitting higher speeds on the turnout side, but these have since been discontinued. Curved switches and thick web tongue rails have also been recently introduced to permit higher speeds at turnouts.

Indian Railways (IR) has modernized its track structure in the recent past to meet the challenges of heavier loads and faster traffic. More than 10,000 km of the track is laid with 60-kg rails and more than 40,000 km is laid with concrete sleepers. The present IR standards for BG and MG routes are elaborated in the following sections.

The track on Indian Railways for BG sections is classified into five broad categories based on speed. These are group A, B, C, D, and E routes. Also, D spl and E spl routes have been subsequently added as explained in Section 1.8. The track standard on BG routes has been reviewed and revised from time to time based on the obtainable speeds and traffic conditions. The present BG track structure is detailed in Table 5.1. 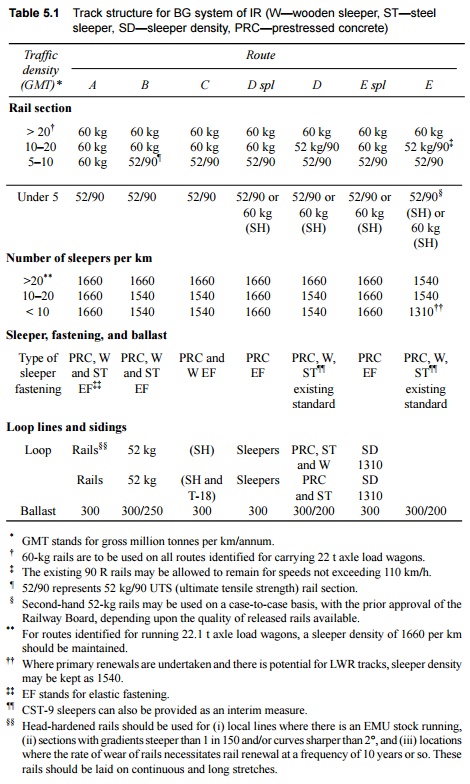 The various track standards for private sidings are listed in Table 5.2

Tracks on MG routes have been classified based on speed and GMT in categories Q, RI, R2, R3, and S routes. The S route of MG has been further classified as S1, S2, and S3 routes as per the details given below.

(a)  Routes with a through movement of freight traffic are identified as S1 routes.

(b) Uneconomic branch lines are identified as S3 routes.

(c)  Routes that are neither S1 nor S3 are identified as S2 routes.

The track standards being followed on MG routes are given in Table 5.3. 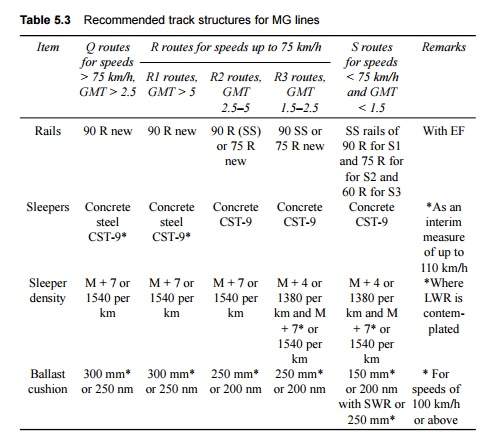 (a)  Heavy haul routes identified for the movement of 14 t axle load wagons should be laid to the minimum standard prescribed for R1 routes even if these routes are classified in lower categories.

(b) Concrete sleepers, wherever provided, should have a minimum ballast cushion of 250 mm.

(c)  New rails should be laid as LWR and concrete sleepers should be used for LWR as far as possible.

(d) Released rails of a higher section of (up to 90 R) may be used if the prescribed sections of rails are not available.

Released BG CST-9 (Central Standard Track, 9th series) sleepers (90 R) may be used for secondary renewals on Q and all other routes of MG.