Forces Acting on the Railway Track

A rail is subjected to heavy stresses due to the following types of forces. (a) Vertical loads consisting of dead loads, dynamic augment of loads including the effect of speed, the hammer blow effect, the inertia of reciprocating masses, etc. (b) Lateral forces due to the movement of live loads, eccentric vertical loading, shunting of locomotives, etc. (c) Longitudinal forces due to tractive effort and braking forces, thermal forces, etc. (d) Contact stresses due to wheel and rail contact. (e) Stresses due to surface defects such as flat spots on wheels, etc.

Forces Acting on the Track

A rail is subjected to heavy stresses due to the following types of forces.

(a)  Vertical loads consisting of dead loads, dynamic augment of loads including the effect of speed, the hammer blow effect, the inertia of reciprocating masses, etc.

(b) Lateral forces due to the movement of live loads, eccentric vertical loading, shunting of locomotives, etc.

(e)  Stresses due to surface defects such as flat spots on wheels, etc.

The value of dead load is usually taken from the axle-load diagram. It is, however, brought out that for various reasons the actual wheel loads, even in the static state on a level and perfect track, may be different from the nominal values. Cases have sometimes come to notice where a steam locomotive had a higher axle load than the nominal load or had different right and left wheel loads.

where V is the speed in km/h.

The centrifugal forces due to revolving masses in the driving and coupled wheels of a locomotive, such as crank pins, coupling rods, and parts of the connecting rod, are completely balanced by placing counterweights near the rim of the wheel, diametrically opposite to the revolving masses. The reciprocating masses of the piston, piston rod, cross head, and part of the connecting rod, by virtue of their inertia and oscillatory movement, produce alternating forces in the direction of the stroke and tend to cause the locomotive to oscillate sideways and nose across the track. In order to reduce this nosing tendency, a weight is introduced onto the wheels at the opposite side of the crank. The horizontal component of the centrifugal force of this added weight balances the inertial force in the line of stroke, but the vertical component throws the wheel out of balance in the plane perpendicular to the line of stroke. The vertical component of the centrifugal force of the weight introduced to balance the reciprocating masses causes variation in the wheel pressure on the rail, and is called the hammer blow. The heavier the weight added to balance the reciprocating masses, the greater the hammer blow. 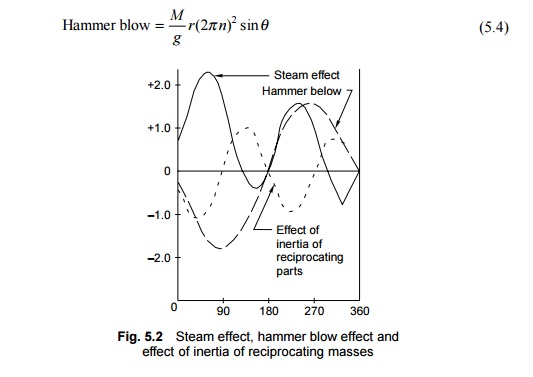 where M is the net overweight in lbs, r is the crank pin diametre in ft, n is the number of revolutions of the wheel per second, and ? is the crank angle.

where L is the length of the connecting rod in inches, h is the height of the cross head above the centre line of the driving wheel in inches, and ? is the crank angle, i.e., the angle traversed by the crank since the beginning of the stroke.

The steam effect (Fig. 5.2) does not scynchronize with the hammer blow effect due to overbalance and is additional to the hammer blow only during some part of the revolution of the crank shaft.

The reciprocating masses, due to their inertia and acceleration, alter the forces on the piston, and hence the force in the connecting rod is also affected during the revolution of the wheel.

where M is the mass of the reciprocating parts, L is the length of the connecting rod, n is the number of revolutions per second, h is the height of the cross head above the centre line of the driving wheel, and ? is the crank angle.

The maximum combined force of the hammer blow, the steam effect, and inertia for each driving wheel and the hammer blow effect of the coupled wheels do not act simultaneously due to the phase difference in the angular position of the counterweights in the coupled and driving wheels. The maximum combined effect of these forces is obtained by summing up the three curves for one complete revolution of the wheel.

Bending stresses on the rail due to vertical loads

The general theory of bending of rails is based on the assumption that the rail is a long bar continuously supported by an elastic foundation. Due to vertical loads, the rail is subjected to bending or flexural stresses. The bending stresses that a rail is subjected to as a result of vertical loads are illustrated in Fig. 5.3. The theory of stresses in rails takes into account the elastic nature of the supports. Based on this theory, the formula for bending moment is

where M is the bending moment, P is the isolated vertical load, l ? (EI/?)1/ 4 is the characteristic length, EI is the flexural stiffness of the rail, ? is the track modulus, and x is the distance of the point from the load. 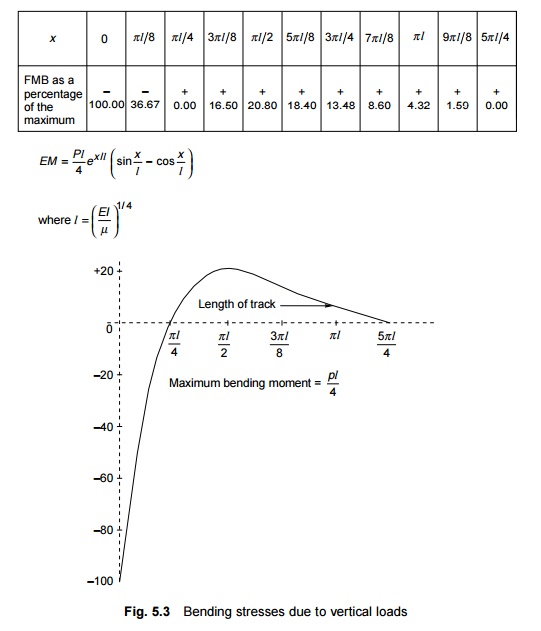 For calculating the stresses acting on the rail, first the maximum bending moment caused due to a series of loads moving on the rail is calculated as per Eqn (5.7). The bending stress is then calculated by dividing the bending moment by the sectional modulus of the rail. The permissible value of bending stress due to a vertical load and its eccentricity is 23.5 kg/mm2 for rails with a 72 UTS.

2 Stresses on the Track

The lateral force applied to the rail head produces a lateral deflection and twist in the rail. Lateral force causes the rail to bend horizontally and the resultant torque causes a huge twist in the rail as well as the bending of the head and foot of the rail. Lateral deflection of the rail is resisted by the friction between the rail and the sleeper, the resistance offered by the rubber pad and fastenings, as well as the ballast coming in contact with the rail.

The combined effect of lateral forces resulting in the bending and twisting of a rail can be measured by strain gauges. Field trials indicate that the loading wheels of a locomotive may exert a lateral force of up to 2 t on a straight track particularly at high speeds.

Due to the tractive effort of the locomotive and its braking force, longitudinal stresses are developed in the rail. Temperature variations, particularly in welded rails, result in thermal forces, which also lead to the development of stresses. The exact magnitude of longitudinal forces depends on many variable factors. However, a rough idea of these values is as follows:

(a)  Longitudinal forces on account of 30-40% weight of locomotive of tractive effort for alternating current (ac).

locomotive and 10-15% weight of trailing load.

Hertz formulated a theory to determine the area of contact and the pressure distribution at the surface of contact between the rail and the wheel. As per this theory, the rail and wheel contact is similar to that of two cylinders (the circular wheel and the curved head of the rail) with their axes at right angles to each other. The area of contact between the two surfaces is bound by an ellipse as shown in Fig. 5.4.

where F is the maximum shear stress in kg/mm2, R is the radius of the fully worn out wheel in mm, and P is the static wheel load in kg + 1000 kg for on-loading on curves 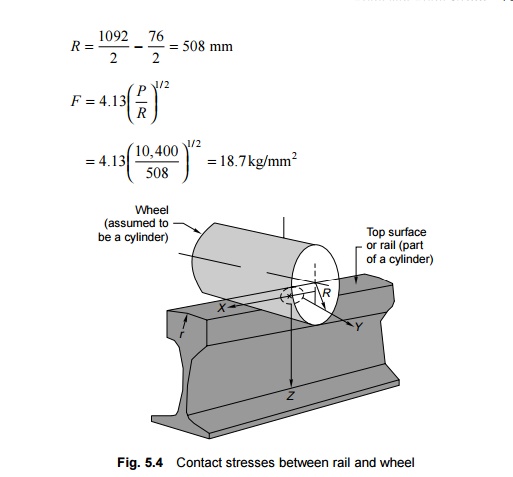 A flat on the wheel or a low spot on the rail causes extra stresses on the rail section. Empirical studies reveal that an additional deflection of about 1.5 times the depth of the flat or low spot occurs at the critical speed (about 30 km/h). Additional bending moment is caused on this account with a value of about 370,000 kg cm for the BG group A route with the WDM4 locomotive.

Stresses on a sleeper

The sleepers are subjected to a large number of forces such as dead and live loads, dynamic components of tracks such as rails and sleeper fastenings, maintenance standards, and other such allied factors. Based on the elastic theory, the maximum load on a rail seat is given by the following formula:

where P is the wheel load, µ is the track modulus, S is the sleeper spacing, l is the characteristic length, and Z is the modulus of the rail section.

The maximum load on the rail seat is 30%-50% of the dynamic wheel load, depending on various factors and particularly the packing under the sleeper.

Centre-bound sleeper As trains pass on the track, the packing under the sleeper tends to become loose because of the hammering action of the moving loads. The sleeper thus tends to be loose under the rail seat. Alternatively, due to defective packing, the sleeper is sometimes hard packed at the centre.

The following are the important conclusions drawn from Fig. 5.5.

(a)  The pressure on the sleeper is maximum at the centre of its width. This pressure decreases from the centre towards the ends.

(b) The vertical pressure under the sleeper is uniform at a depth approximately equal to the spacing between the sleepers.

Pressure on formation or subgrade

The values of maximum formation pressure permitted on Indian Railways are the following: 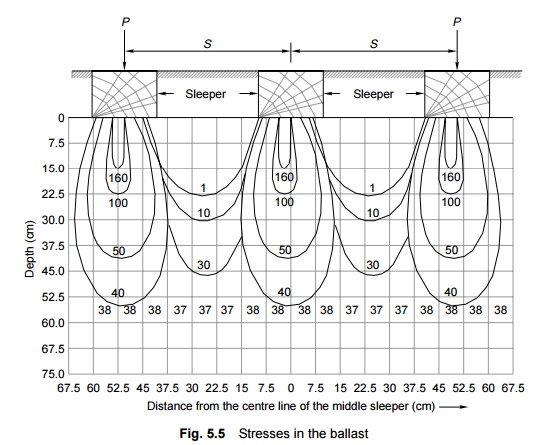 A train load consists of a number of wheel loads close to each other which act simultaneously on the rail. A single isolated wheel load creates much more bending moment in the rail as compared to a group of wheel loads, which on account of the negative bending moment under adjacent wheels provide what known as a 'relief of stresses'. The rail stresses in this case are comparatively smaller. The value of relief of stresses depends upon the distance of the point of contraflexure of the rail and the spacing between the wheels, but its value can be as high as 50%.

Permissible stresses on a rail section

The permissible bending stresses due to vertical load and its eccentricity, and lateral load on a rail section on Indian Railways is given in Table 5.5.

The stresses on a rail are measured by any of the following methods depending upon the facilities available.

The various parameters and their limiting values required to be checked for BG are given in Table 5.6.