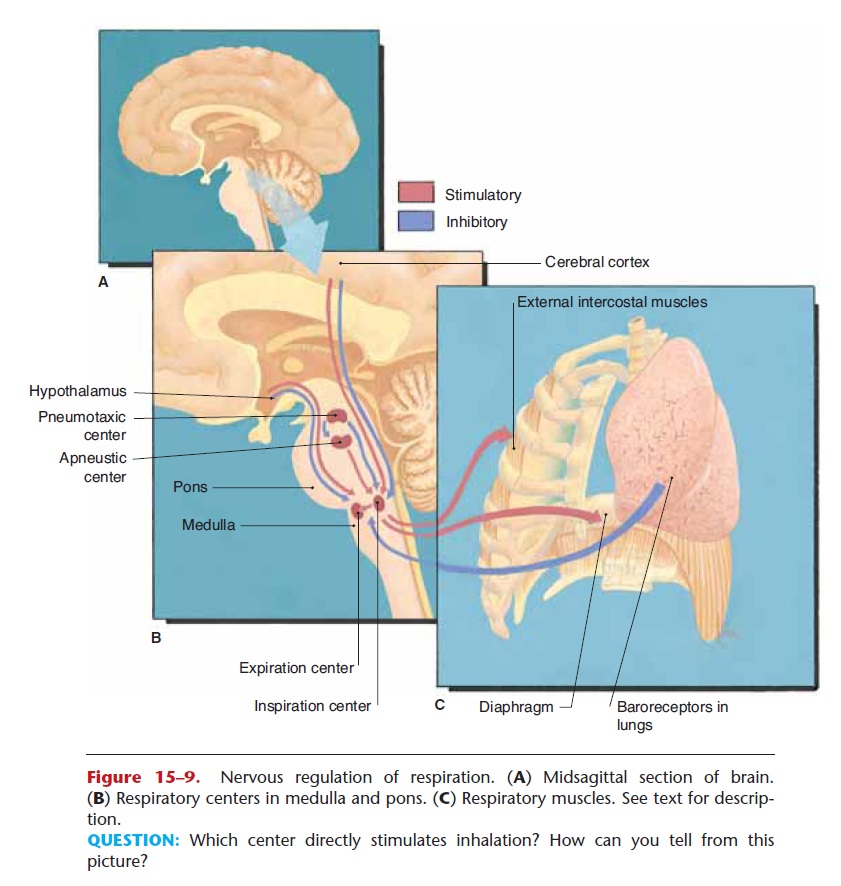 QUESTION: Which center directly stimulates inhalation? How can you tell from this picture?

The inspiration center automatically generates impulses in rhythmic spurts. These impulses travel along nerves to the respiratory muscles to stimulate their contraction. The result is inhalation. As the lungs inflate, baroreceptors in lung tissue detect this stretching and generate sensory impulses to the medulla; these impulses begin to depress the inspira-tion center. This is called the Hering-Breuer inflation reflex, which also helps prevent overinflation of the lungs.

The two respiratory centers in the pons work with the inspiration center to produce a normal rhythm of breathing. The apneustic center prolongs inhalation, and is then interrupted by impulses from the pneu-motaxic center, which contributes to exhalation. Innormal breathing, inhalation lasts 1 to 2 seconds, fol-lowed by a slightly longer (2 to 3 seconds) exhalation, producing the normal respiratory rate range of 12 to 20 breaths per minute.

What has just been described is normal breathing, but variations are possible and quite common. Emo-tions often affect respiration; a sudden fright may bring about a gasp or a scream, and anger usually increases the respiratory rate. In these situations, impulses from the hypothalamus modify the output from the medulla. The cerebral cortex enables us to voluntar-ily change our breathing rate or rhythm to talk, sing, breathe faster or slower, or even to stop breathing for 1 or 2 minutes. Such changes cannot be continued indefinitely, however, and the medulla will eventually resume control.

Coughing and sneezing are reflexes that remove irritants from the respiratory passages; the medulla contains the centers for both of these reflexes. Sneez-ing is stimulated by an irritation of the nasal mucosa, and coughing is stimulated by irritation of the mucosa of the pharynx, larynx, or trachea. The reflex action is essentially the same for both: An inhalation is followed by exhalation beginning with the glottis closed to build up pressure. Then the glottis opens suddenly, and the exhalation is explosive. A cough directs the exhalation out the mouth, while a sneeze directs the exhalation out the nose.

Hiccups, also a reflex, are spasms of the diaphragm. The result is a quick inhalation that is stopped when the glottis snaps shut, causing the “hic” sound. The stimulus may be irritation of the phrenic nerves or nerves of the stomach. Excessive alcohol is an irri-tant that can cause hiccups. Some causes are simply unknown.

Yet another respiratory reflex is yawning. Most of us yawn when we are tired, but the stimulus for and purpose of yawning are not known with certainty. There are several possibilities, such as lack of oxygen or accumulation of carbon dioxide, but we really do not know. Nor do we know why yawning is conta-gious, but seeing someone yawn is almost sure to elicit a yawn of one’s own. You may even have yawned while reading this paragraph about yawning.

Chemical regulation refers to the effect on breathing of blood pH and blood levels of oxygen and carbon dioxide. This is shown in Fig. 15–10. Chemoreceptors that detect changes in blood gases and pH are located in the carotid and aortic bodies and in the medulla itself.

QUESTION: The body’s response to two very different changes (less O2 or more CO2) is the same. Explain why.

A decrease in the blood level of oxygen (hypoxia) is detected by the chemoreceptors in the carotid and aortic bodies. The sensory impulses generated by these receptors travel along the glossopharyngeal and vagus nerves to the medulla, which responds by increasing respiratory rate or depth (or both). This response will bring more air into the lungs so that more oxygen can diffuse into the blood to correct the hypoxic state.

Carbon dioxide becomes a problem when it is pres-ent in excess in the blood, because excess CO2 (hyper-capnia) lowers the pH when it reacts with water to form carbonic acid (a source of H+ ions). That is, excess CO2 makes the blood or other body fluids less alkaline (or more acidic). The medulla contains chemoreceptors that are very sensitive to changes in pH, especially decreases. If accumulating CO2 low-ers blood pH, the medulla responds by increasing res-piration. This is not for the purpose of inhaling, but rather to exhale more CO2 to raise the pH back to normal.

Of the two respiratory gases, which is the more important as a regulator of respiration? Our guess might be oxygen, because it is essential for energy pro-duction in cell respiration. However, the respiratory system can maintain a normal blood level of oxygen even if breathing decreases to half the normal rate or stops for a few moments. Recall that exhaled air is 16% oxygen. This oxygen did not enter the blood but was available to do so if needed. Also, the residual air in the lungs supplies oxygen to the blood even if breathing rate slows.

Therefore, carbon dioxide must be the major regu-lator of respiration, and the reason is that carbon diox-ide affects the pH of the blood. As was just mentioned, an excess of CO2 causes the blood pH to decrease, a process that must not be allowed to continue. Therefore, any increase in the blood CO2 level is quickly compensated for by increased breathing to exhale more CO2. If, for example, you hold your breath, what is it that makes you breathe again? Have you run out of oxygen? Probably not, for the reasons mentioned. What has happened is that accumulating CO2 has lowered blood pH enough to stimulate the medulla to start the breathing cycle again.

In some situations, oxygen does become the major regulator of respiration. People with severe, chronic pulmonary diseases such as emphysema have de-creased exchange of both oxygen and carbon dioxide in the lungs. The decrease in pH caused by accumu-lating CO2 is corrected by the kidneys, but the blood oxygen level keeps decreasing. Eventually, the oxygen level may fall so low that it does provide a very strong stimulus to increase the rate and depth of respiration.