Ventilation is the term for the movement of air to and from the alveoli. 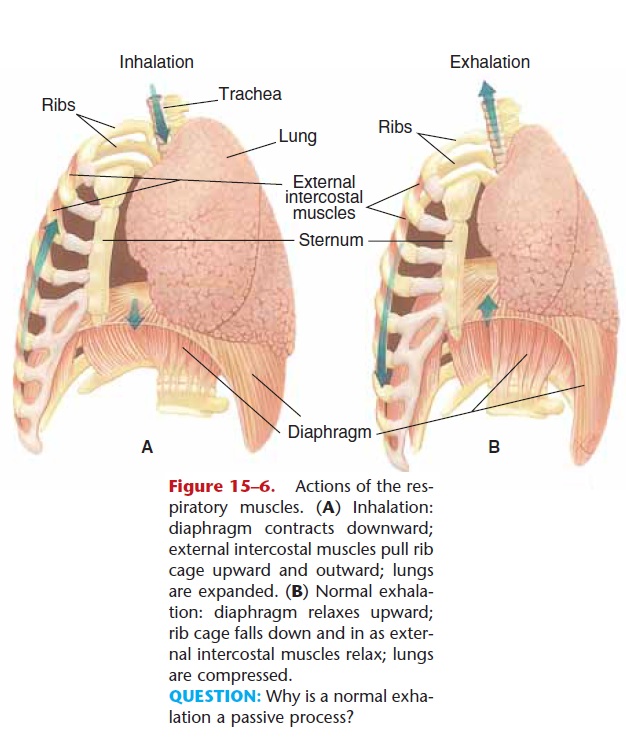 QUESTION: Why is a normal exha-lation a passive process?

These muscles are the diaphragm and the external and internal intercostal muscles (Fig. 15–6). The diaphragm is a dome-shaped muscle below the lungs;

With respect to breathing, three types of pressure are important:

2. Intrapleural pressure—the pressure within the potential pleural space between the parietal pleura and visceral pleura. This is a potential rather than a real space. A thin layer of serous fluid causes the two pleural membranes to adhere to one another. Intrapleural pressure is always slightly below atmospheric pressure (about 756 mmHg), and is called a negative pressure. The elastic lungs are always tending to collapse and pull the visceral pleura away from the parietal pleura. The serous fluid, however, prevents actual separation of the pleural membranes.

3. Intrapulmonic pressure—the pressure within the bronchial tree and alveoli. This pressure fluctuates below and above atmospheric pressure during each cycle of breathing.

Inhalation, also called inspiration, is a precise sequence of events that may be described as follows: Motor impulses from the medulla travel along the phrenic nerves to the diaphragm and along the inter-costal nerves to the external intercostal muscles. The diaphragm contracts, moves downward, and expands the chest cavity from top to bottom. The external intercostal muscles pull the ribs up and out, which expands the chest cavity from side to side and front to back.

As the chest cavity is expanded, the parietal pleura expands with it. Intrapleural pressure becomes even more negative as a sort of suction is created between the pleural membranes. The adhesion created by the serous fluid, however, permits the visceral pleura to be expanded too, and this expands the lungs as well.

As the lungs expand, intrapulmonic pressure falls below atmospheric pressure, and air enters the nose and travels through the respiratory passages to the alveoli. Entry of air continues until intrapulmonic pressure is equal to atmospheric pressure; this is a nor-mal inhalation. Of course, inhalation can be continued beyond normal, that is, a deep breath. This requires a more forceful contraction of the respiratory muscles to further expand the lungs, permitting the entry of more air.

Exhalation may also be called expiration and begins when motor impulses from the medulla decrease and the diaphragm and external intercostal muscles relax. As the chest cavity becomes smaller, the lungs are compressed, and their elastic connective tissue, which was stretched during inhalation, recoils and also compresses the alveoli. As intrapulmonic pressure rises above atmospheric pressure, air is forced out of the lungs until the two pressures are again equal.

Notice that inhalation is an active process that requires muscle contraction, but normal exhalation is a passive process, depending to a great extent on the normal elasticity of healthy lungs. In other words, under normal circumstances we must expend energy to inhale but not to exhale.

We can, however, go beyond a normal exhalation and expel more air, such as when talking, singing, or blowing up a balloon. Such a forced exhalation is an active process that requires contraction of other mus-cles. Contraction of the internal intercostal muscles pulls the ribs down and in and squeezes even more air out of the lungs. Contraction of abdominal muscles, such as the rectus abdominis, compresses the abdomi-nal organs and pushes the diaphragm upward, which also forces more air out of the lungs.