Divisions of the Respiratory System 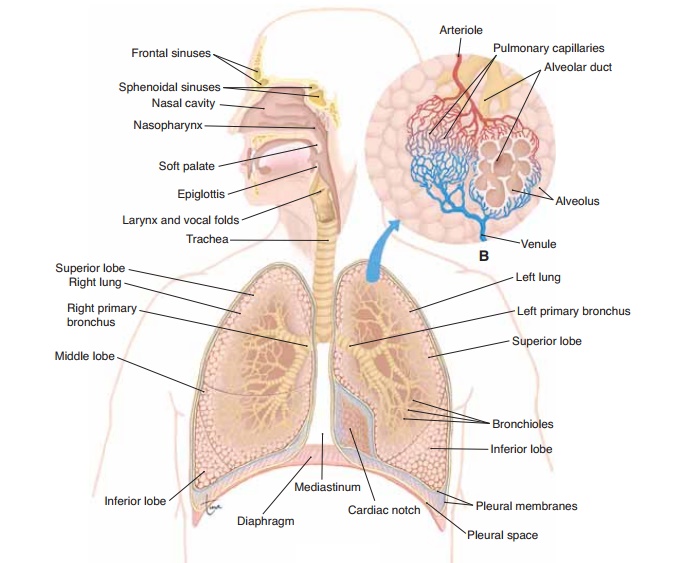 DIVISIONS OF THE RESPIRATORY SYSTEM

Air enters and leaves the respiratory system through the nose, which is made of bone and cartilage covered with skin. Just inside the nostrils are hairs, which help block the entry of dust.

The two nasal cavities are within the skull, sepa-rated by the nasal septum, which is a bony plate made of the ethmoid bone and vomer. The nasal mucosa (lining) is ciliated epithelium, with goblet cells that produce mucus. Three shelf-like or scroll-like bones called conchae project from the lateral wall of each nasal cavity (Figs. 15–1 and 6–6). Just as shelves in a cabinet provide more flat space for storage, the con-chae increase the surface area of the nasal mucosa. As air passes through the nasal cavities it is warmed and humidified, so that air that reaches the lungs is warm and moist. Bacteria and particles of air pollution are trapped on the mucus; the cilia continuously sweep the mucus toward the pharynx. Most of this mucus is eventually swallowed, and most bacteria present will be destroyed by the hydrochloric acid in the gastric juice. 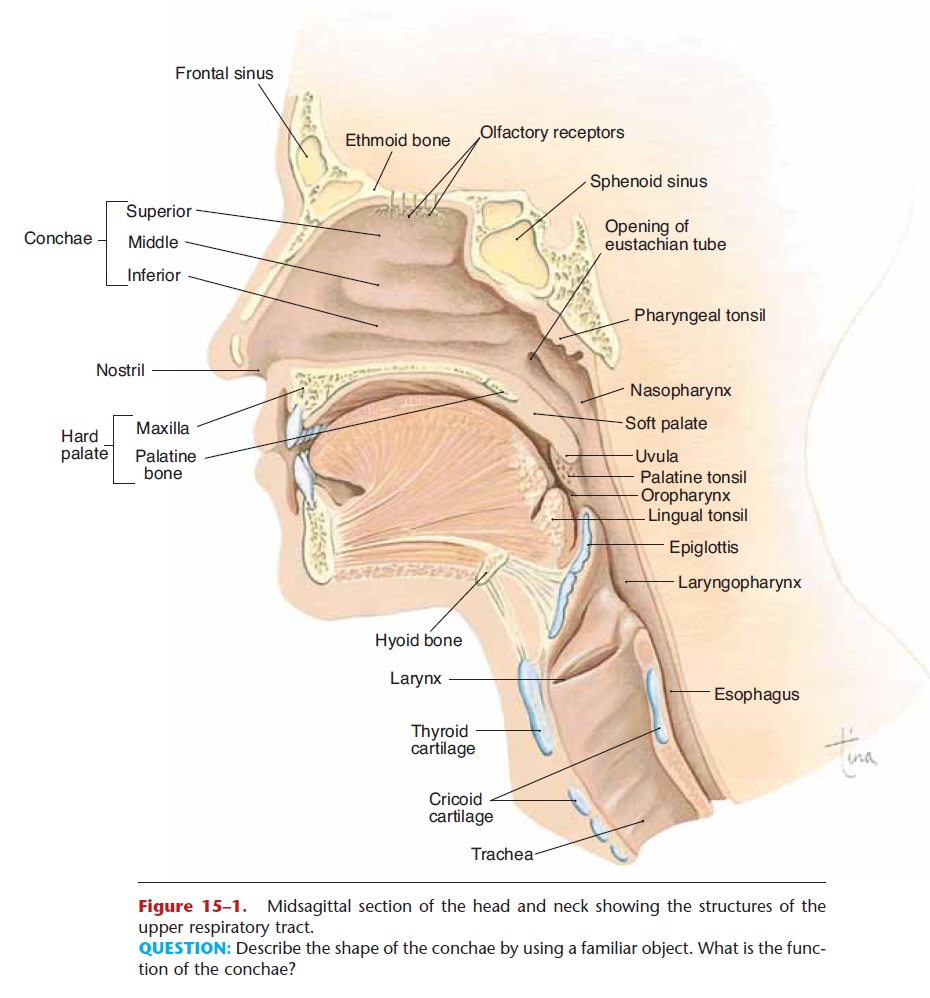 Figure 15–1. Midsagittal section of the head and neck showing the structures of the upper respiratory tract.

In the upper nasal cavities are the olfactory recep-tors, which detect vaporized chemicals that have been inhaled. The olfactory nerves pass through the eth-moid bone to the brain.

You may also recall our earlier discussion of the paranasal sinuses, air cavities in the maxillae, frontal, sphenoid, and ethmoid bones (see Figs. 15–1 and 6–9). These sinuses are lined with ciliated epithelium, and the mucus produced drains into the nasal cavities. The functions of the paranasal sinuses are to lighten the skull and provide resonance (more vibrating air) for the voice.

The pharynx is a muscular tube posterior to the nasal and oral cavities and anterior to the cervical vertebrae. For descriptive purposes, the pharynx may be divided into three parts: the nasopharynx, oropharynx, and laryngopharynx (see Fig. 15–1).

The uppermost portion is the nasopharynx, which is behind the nasal cavities. The soft palate is elevated during swallowing to block the nasopharynx and pre-vent food or saliva from going up rather than down. The uvula is the part of the soft palate you can see at the back of the throat. On the posterior wall of the nasopharynx is the adenoid or pharyngeal tonsil, a lymph nodule that contains macrophages. Opening into the nasopharynx are the two eustachian tubes, which extend to the middle ear cavities. The purpose of the eustachian tubes is to permit air to enter or leave the middle ears, allowing the eardrums to vibrate properly.

The nasopharynx is a passageway for air only, but the remainder of the pharynx serves as both an air and food passageway, although not for both at the same time. The oropharynx is behind the mouth; its mucosa is stratified squamous epithelium, continuous with that of the oral cavity. On its lateral walls are the palatine tonsils, also lymph nodules. Together with the adenoid and the lingual tonsils on the base of the tongue, they form a ring of lymphatic tissue around the pharynx to destroy pathogens that penetrate the mucosa.

The larynx is often called the voice box, a name that indicates one of its functions, which is speaking. The other function of the larynx is to be an air passageway between the pharynx and the trachea. Air passages must be kept open at all times, and so the larynx is made of nine pieces of cartilage connected by liga-ments. Cartilage is a firm yet flexible tissue that pre-vents collapse of the larynx. In comparison, the esophagus is a collapsed tube except when food is pass-ing through it.

The largest cartilage of the larynx is the thyroid cartilage (Fig. 15–2), which you can feel on the ante-rior surface of your neck. Theepiglottis is the upper-most cartilage. During swallowing, the larynx is elevated, and the epiglottis closes over the top, rather like a trap door or hinged lid, to prevent the entry of saliva or food into the larynx. 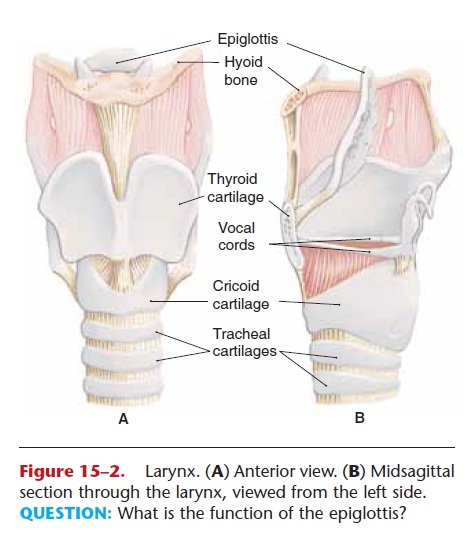 Figure 15–2. Larynx. (A) Anterior view. (B) Midsagittal section through the larynx, viewed from the left side. QUESTION: What is the function of the epiglottis?

The mucosa of the larynx is ciliated epithelium, except for the vocal cords (stratified squamous epithe-lium). The cilia of the mucosa sweep upward to remove mucus and trapped dust and microorganisms.

The vocal cords (or vocal folds) are on either side of the glottis, the opening between them. During breathing, the vocal cords are held at the sides of the glottis, so that air passes freely into and out of the tra-chea (Fig. 15–3). During speaking, the intrinsic mus-cles of the larynx pull the vocal cords across the glottis, and exhaled air vibrates the vocal cords to produce sounds that can be turned into speech. It is also phys-ically possible to speak while inhaling, but this is not what we are used to. The cranial nerves that are motor nerves to the larynx for speaking are the vagus and accessory nerves. You may also recall that for most people, the speech areas are in the left cerebral hemi-sphere. 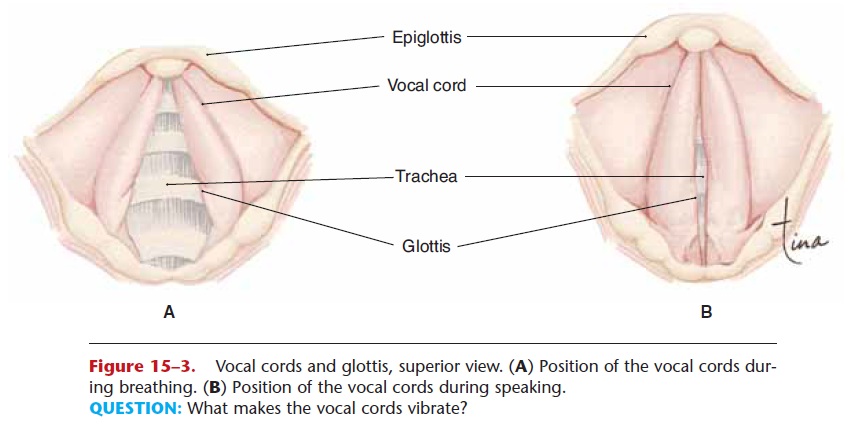 The trachea is about 4 to 5 inches (10 to 13 cm) long and extends from the larynx to the primary bronchi. The wall of the trachea contains 16 to 20 C-shaped pieces of cartilage, which keep the trachea open. The gaps in these incomplete cartilage rings are posterior, to permit the expansion of the esophagus when food is swallowed. The mucosa of the trachea is ciliated epithelium with goblet cells. As in the larynx, the cilia sweep upward toward the pharynx. 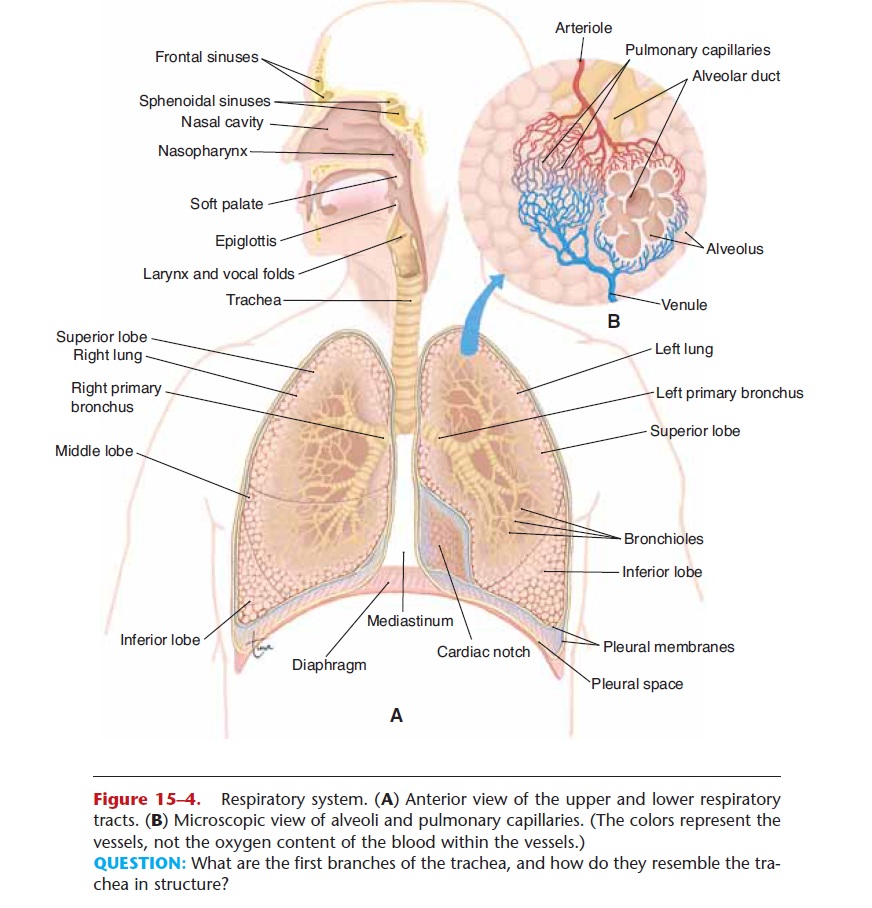 The right and left primary bronchi (Fig. 15–4) are the branches of the trachea that enter the lungs. Their structure is just like that of the trachea, with C-shaped cartilages and ciliated epithelium. Within the lungs, each primary bronchus branches into secondary bronchi leading to the lobes of each lung (three right, two left). The further branching of the bronchial tubes is often called thebronchial tree. Imagine the trachea as the trunk of an upside-down tree with extensive branches that become smaller and smaller; these smaller branches are the bronchioles. No cartilage is present in the walls of the bronchioles; this becomes clinically important in asthma. The smallest bronchioles terminate in clusters of alve-oli, the air sacs of the lungs.

The lungs are located on either side of the heart in the chest cavity and are encircled and protected by the rib cage. The base of each lung rests on the diaphragm below; the apex (superior tip) is at the level of the clav-icle. On the medial surface of each lung is an indenta-tion called the hilus, where the primary bronchus and the pulmonary artery and veins enter the lung.

The pleural membranes are the serous membranes of the thoracic cavity. The parietal pleura lines the chest wall, and the visceral pleura is on the surface of the lungs. Between the pleural membranes is serous fluid, which prevents friction and keeps the two mem-branes together during breathing.

The functional units of the lungs are the air sacs called alveoli. The flat alveolar type I cells that form most of the alveolar walls are simple squamous epithelium. In the spaces between clusters of alveoli is elastic con-nective tissue, which is important for exhalation. Within the alveoli are macrophages that phagocytize pathogens or other foreign material that may not have been swept out by the ciliated epithelium of the bronchial tree. There are millions of alveoli in each lung, and their total surface area is estimated to be 700 to 800 square feet (picture a sidewalk two and a half feet wide that is as long as an American football field, or a rectangle 25 feet by 30 feet). Each alveolus is sur-rounded by a network of pulmonary capillaries (see Fig 15–4). Recall that capillaries are also made of sim-ple squamous epithelium, so there are only two cells between the air in the alveoli and the blood in the pulmonary capillaries, which permits efficient diffusion of gases (Fig. 15–5). 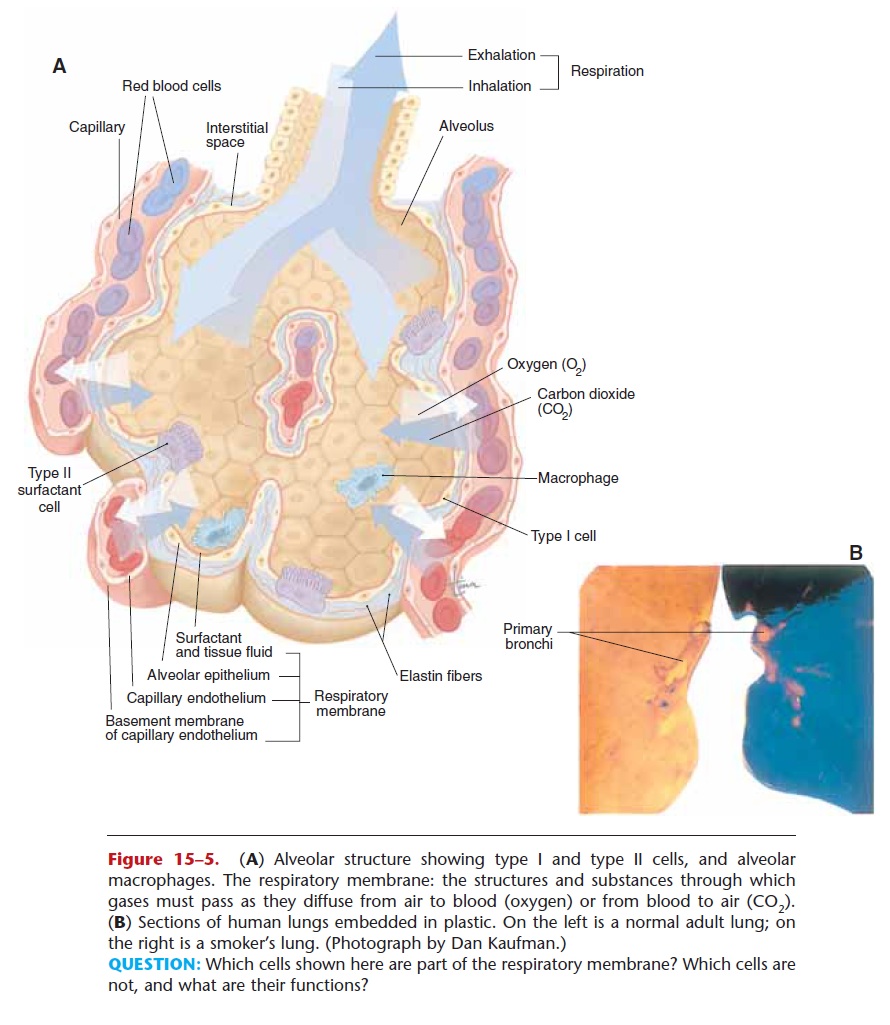 Each alveolus is lined with a thin layer of tissue fluid, which is essential for the diffusion of gases, be-cause a gas must dissolve in a liquid in order to enter or leave a cell (the earthworm principle—an earth-worm breathes through its moist skin, and will suffo-cate if its skin dries out). Although this tissue fluid is necessary, it creates a potential problem in that it would make the walls of an alveolus stick together internally. Imagine a plastic bag that is wet inside; its walls would stick together because of the surface ten-sion of the water. This is just what would happen in alveoli, and inflation would be very difficult.

This problem is overcome by pulmonary surfac-tant, a lipoprotein secreted by alveolar type II cells, also called septal cells. Surfactant mixes with the tissue fluid within the alveoli and decreases its surface tension, permitting inflation of the alveoli. Normal inflation of the alveoli in turn permits the exchange of gases, but before we discuss this process, we will first see how air gets into and out of the lungs. 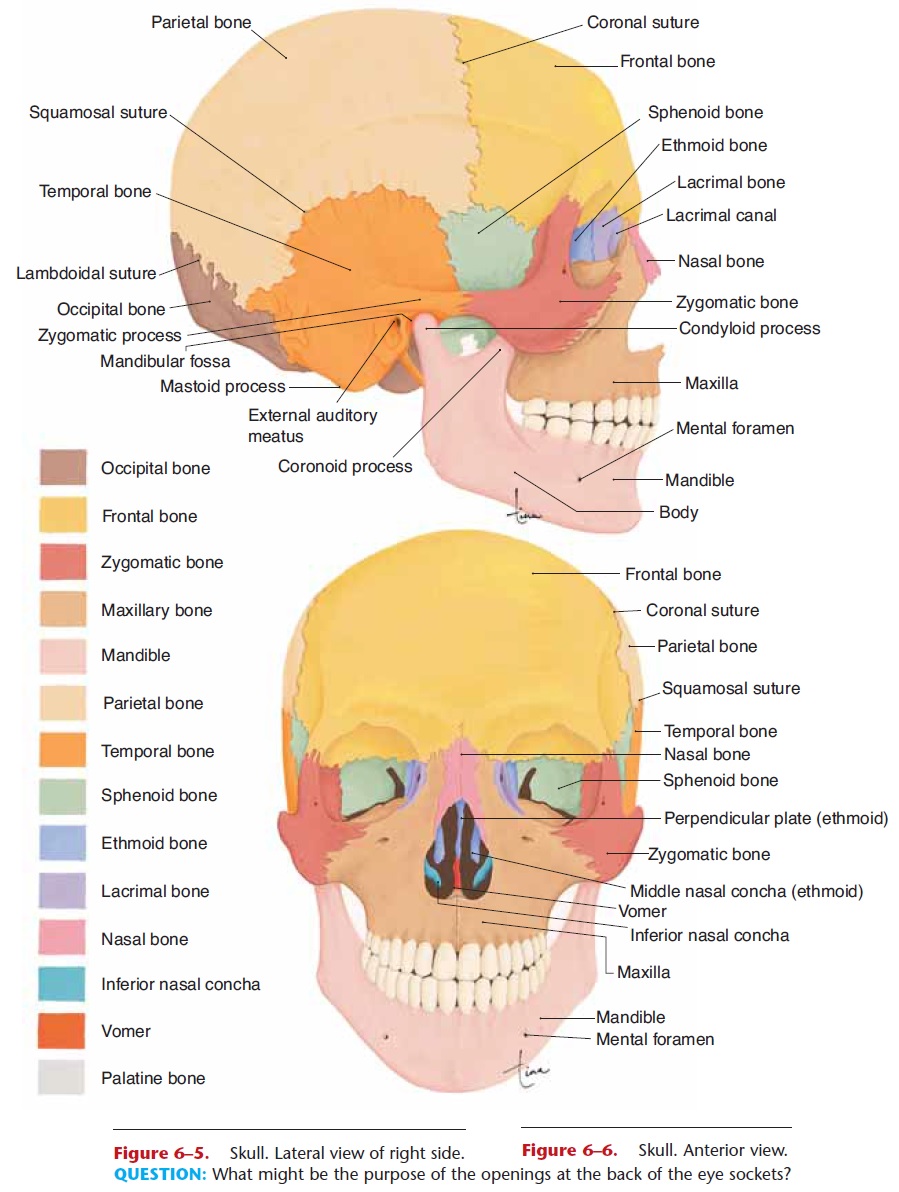 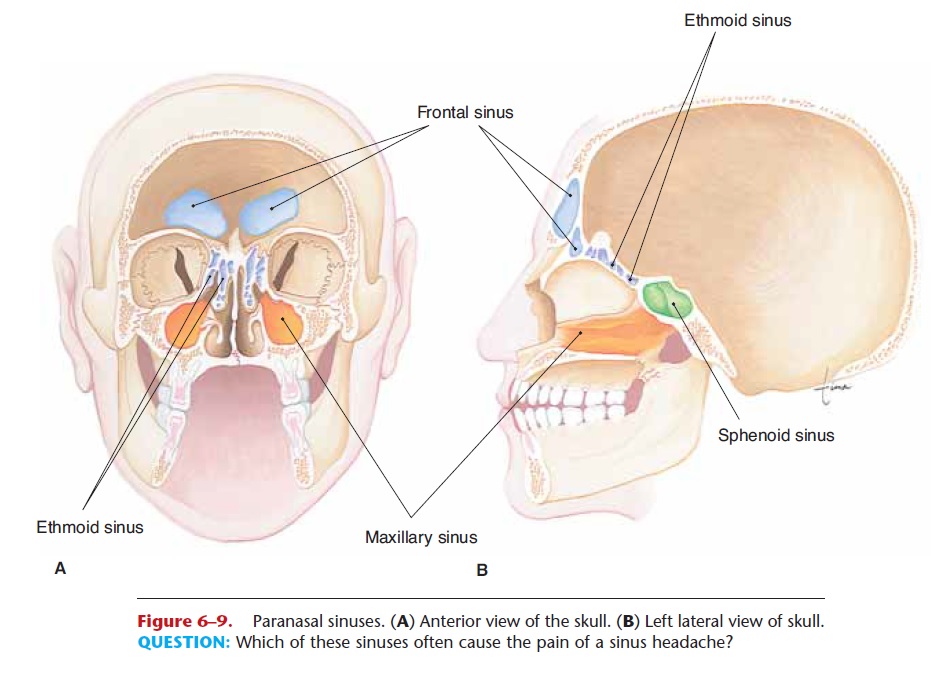