The capacity of the lungs varies with the size and age of the person. Taller people have larger lungs than do shorter people. Also, as we get older our lung capacity diminishes as lungs lose their elasticity and the respi-ratory muscles become less efficient.

The capacity of the lungs varies with the size and age of the person. Taller people have larger lungs than do shorter people. Also, as we get older our lung capacity diminishes as lungs lose their elasticity and the respi-ratory muscles become less efficient. For the following pulmonary volumes, the values given are those for healthy young adults. These are also shown in Fig. 15–7 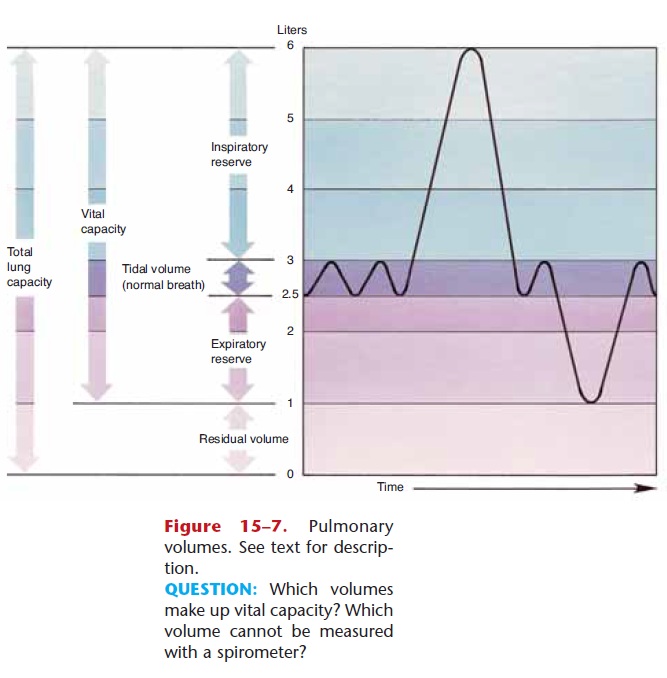 1. Tidal volume—the amount of air involved in one normal inhalation and exhalation. The average tidal volume is 500 mL, but many people often have lower tidal volumes because of shallow breathing.

4. Expiratory reserve—the amount of air, beyond tidal volume, that can be expelled with the most forceful exhalation. Normal expiratory reserve ranges from 1000 to 1500 mL.

6. Residual air—the amount of air that remains in the lungs after the most forceful exhalation; the average range is 1000 to 1500 mL. Residual air is important to ensure that there is some air in the lungs at all times, so that exchange of gases is a con-tinuous process, even between breaths.

Some of the volumes just described can be deter-mined with instruments called spirometers, which measure movement of air. Trained singers and musi-cians who play wind instruments often have vital capacities much larger than would be expected for their height and age, because their respiratory muscles have become more efficient with “practice.” The same is true for athletes who exercise regularly. A person with emphysema, however, must “work” to exhale, and vital capacity and expiratory reserve volume are often much lower than average.

Another  kind  of  pulmonary  volume  is  alveolarventilation, which is the amount of air that actually reaches the alveoli and participates in gas exchange. An average tidal volume is 500 mL, of which 350 to 400 mL is in the alveoli at the end of an inhalation. The remaining 100 to 150 mL of air is anatomic deadspace, the air still within the respiratory passages. Despite the rather grim name, anatomic dead space is normal; everyone has it.

The compliance of the thoracic wall and the lungs, that is, their normal expansibility, is necessary for suf-ficient alveolar ventilation. Thoracic compliance may be decreased by fractured ribs, scoliosis, pleurisy, or ascites. Lung compliance will be decreased by any condition that increases physiologic dead space. Nor-mal compliance thus promotes sufficient gas exchange in the alveoli.