When a person is at rest, the heart pumps only 4 to 6 liters of blood each minute.

When a person is at rest, the heart pumps only 4 to 6 liters of blood each minute. During severe exercise, the heart may be required to pump four to seven times this amount. The basic means by which the volume pumped by the heart is regulated are (1) intrinsic cardiac regulation of pumping in response to changes in volume of blood flowing into the heart and (2) control of heart rate and strength of heart pumping by the autonomic nervous system.

We will learn that under most condi-tions, the amount of blood pumped by the heart each minute is determined almost entirely by the rate of blood flow into the heart from the veins, which is called venous return. That is, each peripheral tissue of thebody controls its own local blood flow, and all the local tissue flows combine and return by way of the veins to the right atrium. The heart, in turn, automatically pumps this incoming blood into the arteries, so that it can flow around the circuit again.

This intrinsic ability of the heart to adapt to increas-ing volumes of inflowing blood is called the Frank-Starling mechanism of the heart, in honor of Frank and Starling, two great physiologists of a century ago. Basi-cally, the Frank-Starling mechanism means that the greater the heart muscle is stretched during filling, the greater is the force of contraction and the greater the quantity of blood pumped into the aorta. Or, stated another way: Within physiologic limits, the heart pumpsall the blood that returns to it by the way of the veins.

What Is the Explanation of the Frank-Starling Mechanism?

When an extra amount of blood flows into the ventri-cles, the cardiac muscle itself is stretched to greater length. This in turn causes the muscle to contract with increased force because the actin and myosin filaments are brought to a more nearly optimal degree of overlap for force generation. Therefore, the ventricle, because of its increased pumping, automatically pumps the extra blood into the arteries.

This ability of stretched muscle, up to an optimal length, to contract with increased work output is char-acteristic of all striated muscle, and is not simply a characteristic of cardiac muscle.

In addition to the important effect of lengthening the heart muscle, still another factor increases heart pumping when its volume is increased. Stretch of the right atrial wall directly increases the heart rate by 10 to 20 per cent; this, too, helps increase the amount of blood pumped each minute, although its contribu-tion is much less than that of the Frank-Starling mechanism.

One of the best ways to express the functional ability of the ventricles to pump blood is by ventricular func-tion curves, as shown in Figures 9–8 and 9–9. Figure9–8 shows a type of ventricular function curve called the stroke work output curve. Note that as the atrial pressure for each side of the heart increases, the stroke work output for that side increases until it reaches the limit of the ventricle’s pumping ability. 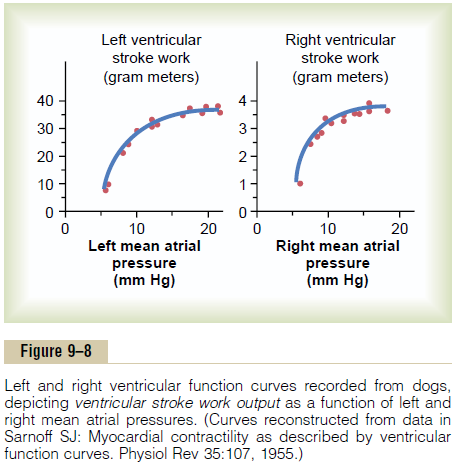 The two curves of this figure represent function of the two ventricles of the human heart based on data extrapolated from lower animals. As the right and left atrial pressures increase, the respective ventricular volume outputs per minute also increase. 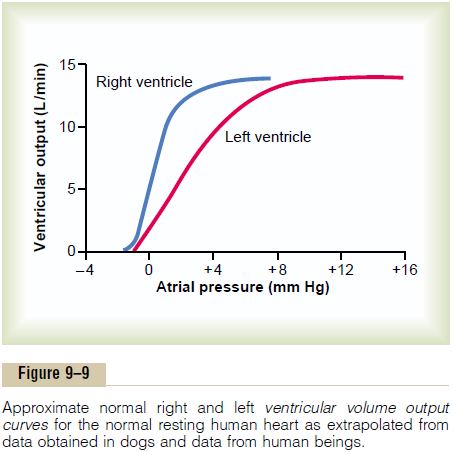 Thus, ventricular function curves are another way of expressing the Frank-Starling mechanism of the heart. That is, as the ventricles fill in response to higher atrial pressures, each ventricular volume and strength of cardiac muscle contraction increase, causing the heart to pump increased quantities of blood into the arteries.

Control of the Heart by the Sympathetic and Parasympathetic Nerves

The pumping effectiveness of the heart also is con-trolled by the sympathetic and parasympathetic(vagus) nerves, which abundantly supply the heart, asshown in Figure 9–10. For given levels of input atrial pressure, the amount of blood pumped each minute (cardiac output) often can be increased more than 100per cent by sympathetic stimulation. By contrast, the output can be decreased to as low as zero or almost zero by vagal (parasympathetic) stimulation.

Mechanisms of Excitation of the Heart by the Sympathetic Nerves. Strong sympathetic stimulation can increasethe heart rate in young adult humans from the normal rate of 70 beats per minute up to 180 to 200 and, rarely, even 250 beats per minute. Also, sympathetic stimula-tion increases the force of heart contraction to as much as double normal, thereby increasing the volume of blood pumped and increasing the ejection pressure. 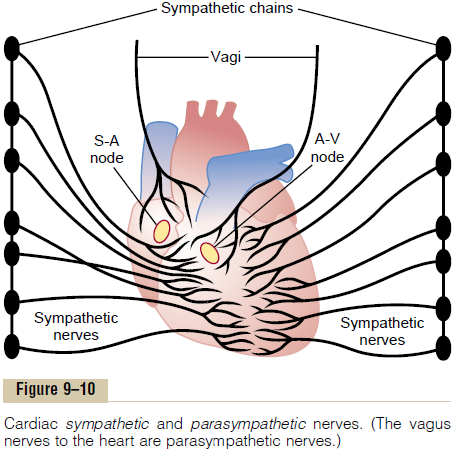 Thus, sympathetic stimulation often can increase the maximum cardiac output as much as twofold to three-fold, in addition to the increased output caused by the Frank-Starling mechanism already discussed.

The vagal fibers are distributed mainly to the atria and not much to the ventricles, where the power con-traction of the heart occurs. This explains the effect of vagal stimulation mainly to decrease heart rate rather than to decrease greatly the strength of heart contrac-tion. Nevertheless, the great decrease in heart rate combined with a slight decrease in heart contraction strength can decrease ventricular pumping 50 per cent or more.

Effect of Sympathetic or Parasympathetic Stimulation on the Cardiac Function Curve. Figure 9–11 shows four cardiac function curves. They are similar to the ventricular function curves of Figure 9–9. However, they represent function of the entire heart rather than of a single ven-tricle; they show the relation between right atrial pres-sure at the input of the right heart and cardiac output from the left ventricle into the aorta. 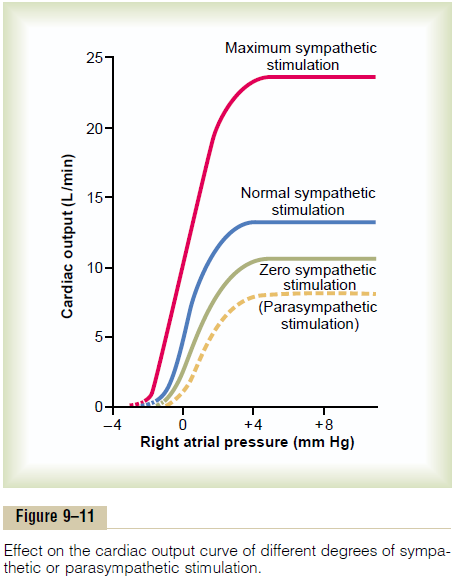 The curves of Figure 9–11 demonstrate that at any given right atrial pressure, the cardiac output increases during increased sympathetic stimulation and decreases during increased parasympathetic stimula-tion. These changes in output caused by nerve stimu-lation result both from changes in heart rateand from changes in contractile strength of the heart becauseboth change in response to the nerve stimulation.

Effect of Potassium and Calcium Ions on Heart Function

Potassium ions have a marked effect on membrane potentials, and Calcium ions play an especially important role in activating the muscle contractile process. Therefore, it is to be expected that the con-centration of each of these two ions in the extracellu-lar fluids should also have important effects on cardiac pumping.

Effect of Potassium Ions. Excess potassium in the extra-cellular fluids causes the heart to become dilated and flaccid and also slows the heart rate. Large quantities also can block conduction of the cardiac impulse from the atria to the ventricles through the A-V bundle. Elevation of potassium concentration to only 8 to 12 mEq/L—two to three times the normal value—can cause such weakness of the heart and abnormal rhythm that this can cause death.

These effects result partially from the fact that a high potassium concentration in the extracellular fluids decreases the resting membrane potential in the cardiac muscle fibers. As the membrane potential decreases, the intensity of the action potential also decreases, which makes con-traction of the heart progressively weaker.

Effect of Calcium Ions. An excess of calcium ions causeseffects almost exactly opposite to those of potassium ions, causing the heart to go toward spastic contrac-tion. This is caused by a direct effect of calcium ions to initiate the cardiac contractile process.

Conversely, deficiency of calcium ions causes cardiac flaccidity, similar to the effect of high potassium.Fortunately, however, calcium ion levels in the blood normally are regulated within a very narrow range. Therefore, cardiac effects of abnormal calcium con-centrations are seldom of clinical concern.

Effect of Temperature on Heart Function

Increased body temperature, as occurs when one has fever, causes a greatly increased heart rate, sometimes to as fast as double normal. Decreased temperature causes a greatly decreased heart rate, falling to as low as a few beats per minute when a person is near death from hypothermia in the body temperature range of 60° to 70°F. These effects presumably result from the fact that heat increases the permeability of the cardiac muscle membrane to ions that control heart rate, resulting in acceleration of the self-excitation process.

Contractile strength of the heart often is enhancedtemporarily by a moderate increase in temperature, as occurs during body exercise, but prolonged elevation of temperature exhausts the metabolic systems of the heart and eventually causes weakness.

Note in Figure 9–12 that increasing the arterial pres-sure in the aorta does not decrease the cardiac output until the mean arterial pressure rises above about 160 mm Hg. In other words, during normal function of 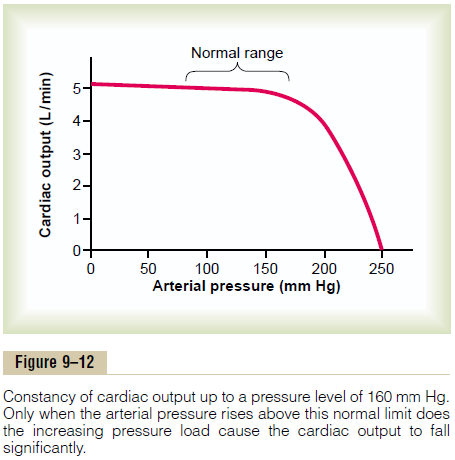 the heart at normal systolic arterial pressures (80 to 140 mm Hg), the cardiac output is determined almost entirely by the ease of blood flow through the body’s tissues, which in turn controls venous return of blood to the heart.