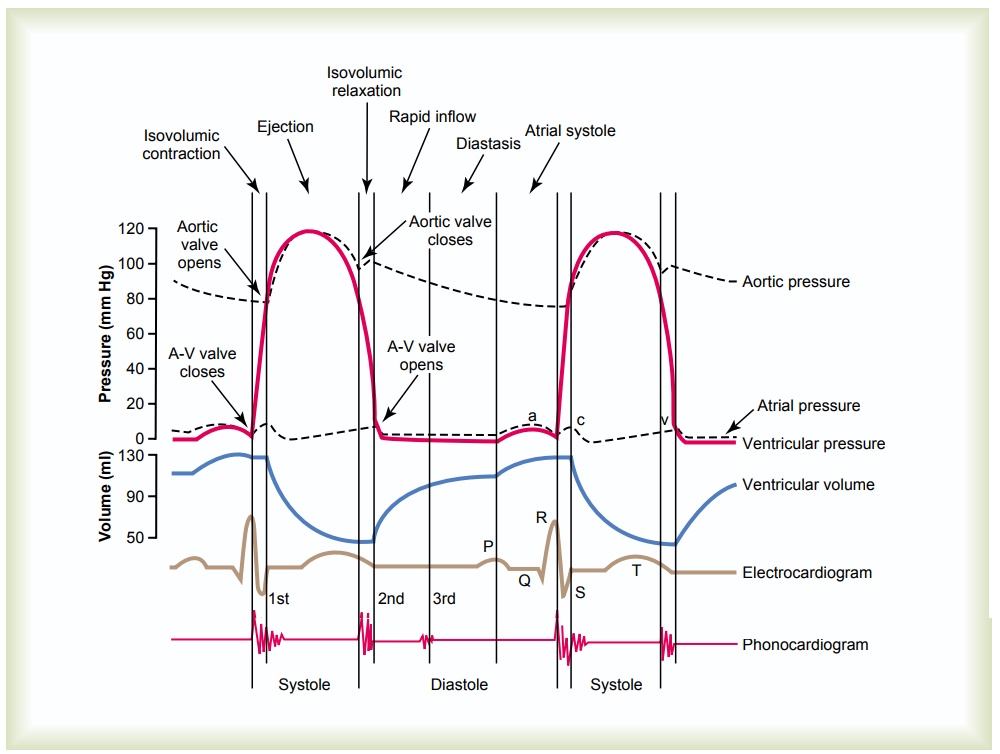 The cardiac cycle consists of a period of relaxation called diastole, during which the heart fills with blood, followed by a period of contraction calledsystole.

Figure 9–5 shows the different events during the cardiac cycle for the left side of the heart.The top three curves show the pressure changes in the aorta, left ven-tricle, and left atrium, respectively. The fourth curve depicts the changes in left ventricular volume, the fifth 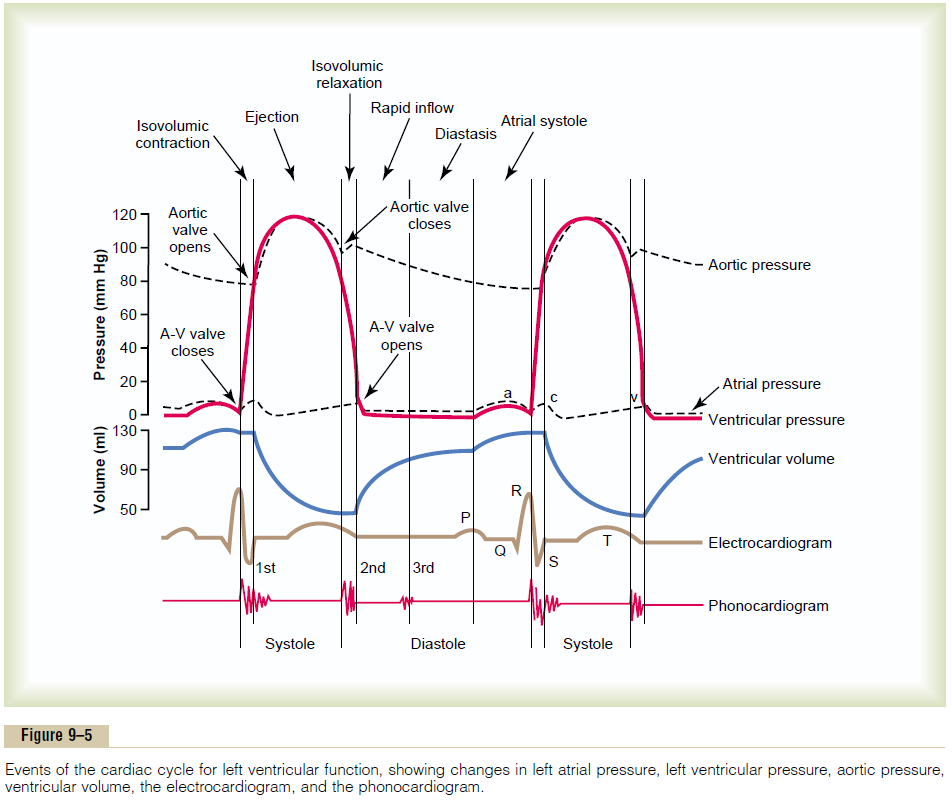 the electrocardiogram, and the sixth a phonocardio-gram, which is a recording of the sounds produced by the heart—mainly by the heart valves—as it pumps. It is especially important that the reader study in detail this figure and understand the causes of all the events shown.

Relationship of the Electrocardiogram to the Cardiac Cycle

The P wave is caused by spread of depolarization through the atria, and this is followed by atrial con-traction, which causes a slight rise in the atrial pres-sure curve immediately after the electrocardiographic P wave.

Finally, one observes the ventricular T wave in the electrocardiogram. This represents the stage of repo-larization of the ventricles when the ventricular muscle fibers begin to relax. Therefore, the T wave occurs slightly before the end of ventricular contraction.

Function of the Atria as Primer Pumps

Blood normally flows continually from the great veins into the atria; about 80 per cent of the blood flows directly through the atria into the ventricles even before the atria contract. Then, atrial contraction usually causes an additional 20 per cent filling of the ventricles. Therefore, the atria simply function as primer pumps that increase the ventricular pumping effectiveness as much as 20 per cent. However, the heart can continue to operate under most conditions even without this extra 20 per cent effectiveness because it normally has the capability of pumping 300 to 400 per cent more blood than is required by the resting body. Therefore, when the atria fail to function, the difference is unlikely to be noticed unless a person exercises; then acute signs of heart failure occasionally develop, especially shortness of breath.

The c wave occurs when the ventricles begin to contract; it is caused partly by slight backflow of blood into the atria at the onset of ventricular contraction but mainly by bulging of the A-V valves backward toward the atria because of increasing pressure in the ventricles.

Function of the Ventricles as Pumps

Filling of the Ventricles. During ventricular systole, largeamounts of blood accumulate in the right and left atria because of the closed A-V valves. Therefore, as soon as systole is over and the ventricular pressures fall again to their low diastolic values, the moderately increased pressures that have developed in the atria during ventricular systole immediately push the A-V valves open and allow blood to flow rapidly into the ventricles, as shown by the rise of the left ventricularvolume curve in Figure 9–5. This is called the period of rapid filling of the ventricles.

During the last third of diastole, the atria contract and give an additional thrust to the inflow of blood into the ventricles; this accounts for about 20 per cent of the filling of the ventricles during each heart cycle.

Emptying of the Ventricles During Systole

Period of Isovolumic (Isometric) Contraction. Immedi-ately after ventricular contraction begins, the ventric-ular pressure rises abruptly, as shown in Figure 9–5, causing the A-V valves to close. Then an additional 0.02 to 0.03 second is required for the ventricle to build up sufficient pressure to push the semilunar (aortic and pulmonary) valves open against the pressures in the aorta and pulmonary artery. Therefore, during this period, contraction is occurring in the ventricles, but there is no emptying. This is called the period of iso-volumic or isometric contraction, meaning that tensionis increasing in the muscle but little or no shortening of the muscle fibers is occurring.

Period of Ejection. When the left ventricular pressurerises slightly above 80 mm Hg (and the right ventricu-lar pressure slightly above 8 mm Hg), the ventricular pressures push the semilunar valves open. Immedi-ately, blood begins to pour out of the ventricles, with about 70 per cent of the blood emptying occurring during the first third of the period of ejection and the remaining 30 per cent emptying during the next two thirds. Therefore, the first third is called the period ofrapid ejection, and the last two thirds, the period of slow ejection.

Period of Isovolumic (Isometric) Relaxation. At the end ofsystole, ventricular relaxation begins suddenly, allow-ing both the right and left intraventricular pressures to decrease rapidly. The elevated pressures in the dis-tended large arteries that have just been filled with blood from the contracted ventricles immediately push blood back toward the ventricles, which snaps the aortic and pulmonary valves closed. For another 0.03 to 0.06 second, the ventricular muscle continues to relax, even though the ventricular volume does not change, giving rise to the period of isovolumic or iso-metric relaxation. During this period, the intraven-tricular pressures decrease rapidly back to their low diastolic levels. Then the A-V valves open to begin a new cycle of ventricular pumping.

Function of the Valves

Atrioventricular Valves. TheA-V valves(thetricuspidand mitral valves) prevent backflow of blood from the ventricles to the atria during systole, and thesemilu-nar valves (the aortic and pulmonary artery valves)prevent backflow from the aorta and pulmonary ar-teries into the ventricles during diastole. These valves, shown in Figure 9–6 for the left ventricle, close and open passively. That is, they close when a backward pressure gradient pushes blood backward, and they open when a forward pressure gradient forces blood in the forward direction. For anatomical reasons, the thin, filmy A-V valves require almost no backflow to cause closure, whereas the much heavier semilunar valves require rather rapid backflow for a few milliseconds.

Function of the Papillary Muscles. Figure 9–6 alsoshows papillary muscles that attach to the vanes of the A-V valves by the chordae tendineae. The papillary muscles contract when the ventricular walls contract, but contrary to what might be expected, they do not help the valves to close. Instead, they pull the vanes of the valves inward toward the ventricles to prevent their bulging too far backward toward the atria during ventricular contraction. If a chorda tendinea becomes ruptured or if one of the papillary muscles becomes paralyzed, the valve bulges far backward during ven-tricular contraction, sometimes so far that it leaks severely and results in severe or even lethal cardiac incapacity. 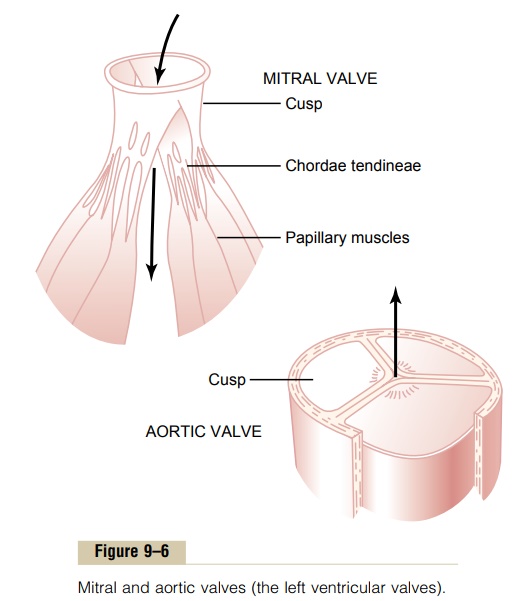 When the left ventricle contracts, the ventricular pres-sure increases rapidly until the aortic valve opens. Then, after the valve opens, the pressure in the ventri-cle rises much less rapidly, as shown in Figure 9–5, because blood immediately flows out of the ventricle into the aorta and then into the systemic distribution arteries.

The entry of blood into the arteries causes the walls of these arteries to stretch and the pressure to increase to about 120 mm Hg.

Next, at the end of systole, after the left ventricle stops ejecting blood and the aortic valve closes, the elastic walls of the arteries maintain a high pressure in the arteries, even during diastole.

A so-called incisura occurs in the aortic pressure curve when the aortic valve closes. This is caused by a short period of backward flow of blood immediately before closure of the valve, followed by sudden cessa-tion of the backflow.

After the aortic valve has closed, the pressure in the aorta decreases slowly throughout diastole because the blood stored in the distended elastic arteries flows continually through the peripheral vessels back to the veins. Before the ventricle contracts again, the aortic pressure usually has fallen to about 80 mm Hg (dias-tolic pressure), which is two thirds the maximal pres-sure of 120 mm Hg (systolic pressure) that occurs in the aorta during ventricular contraction.

The pressure curves in the right ventricle and pul-monary artery are similar to those in the aorta, exceptthat the pressures are only about one sixth as great.