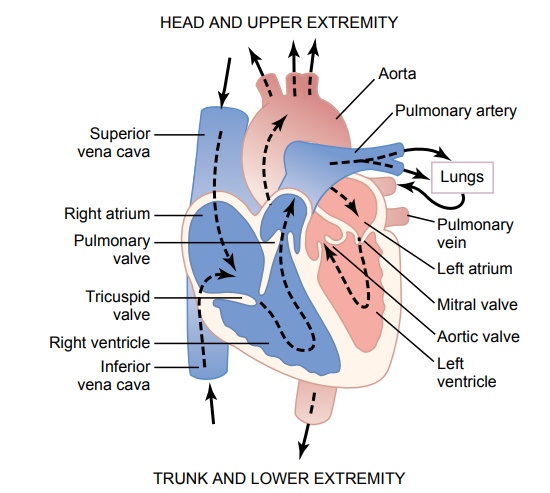 The heart is composed of three major types of cardiac muscle: atrial muscle, ven-tricular muscle, and specialized excitatory and conductive musclefibers. Theatrial and ventricular types of muscle contract in much the same way as skele-tal muscle, except that the duration of contraction is much longer. Conversely, the specialized excitatory and conductive fibers contract only feebly because they contain few contractile fibrils; instead, they exhibit either automatic rhyth-mical electrical discharge in the form of action potentials or conduction of the action potentials through the heart, providing an excitatory system that controls the rhythmical beating of the heart. 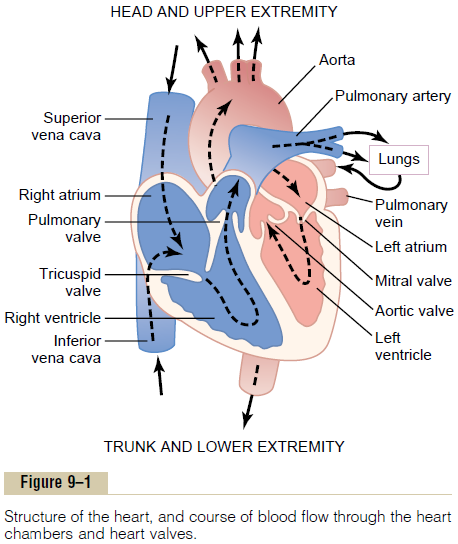 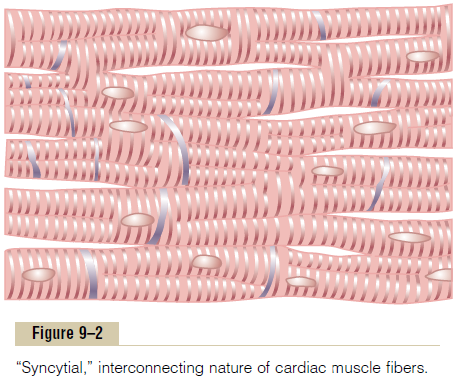 The action potential recorded in a ventricular muscle fiber, shown in Figure 9–3, averages about 105 milli-volts, which means that the intracellular potential rises from a very negative value, about -85 millivolts, between beats to a slightly positive value, about +20 millivolts, during each beat. After the initial spike, the membrane remains depolarized for about 0.2 second, exhibiting a plateau as shown in the figure, followed at the end of the plateau by abrupt repolarization. The presence of this plateau in the action potential causes ventricular contraction to last as much as 15 times as long in cardiac muscle as in skeletal muscle. 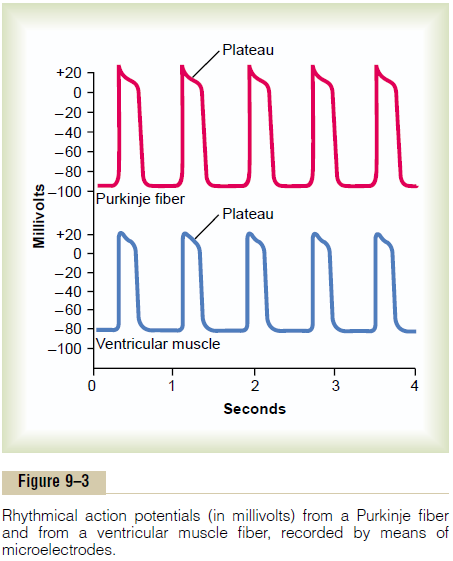 What Causes the Long Action Potential and the Plateau? Atthis point, we must ask the questions:Why is the action potential of cardiac muscle so long, and why does it have a plateau, whereas that of skeletal muscle does not?

At least two major differences between the mem-brane properties of cardiac and skeletal muscle account for the prolonged action potential and the plateau in cardiac muscle. First, the action potential ofskeletal muscle is caused almost entirely by suddenopening of large numbers of so-called fast sodiumchannels that allow tremendous numbers of sodiumions to enter the skeletal muscle fiber from the extra-cellular fluid. These channels are called “fast” channels because they remain open for only a few thousandths of a second and then abruptly close. At the end of this closure, repolarization occurs, and the action potential is over within another thousandth of a second or so.

In cardiac muscle, the action potential is caused by opening of two types of channels: (1) the same fastsodium channels as those in skeletal muscle and (2)another entirely different population of slow calciumchannels, which are also called calcium-sodium channels. This second population of channels differsfrom the fast sodium channels in that they are slower to open and, even more important, remain open for several tenths of a second. During this time, a large quantity of both calcium and sodium ions flows through these channels to the interior of the cardiac muscle fiber, and this maintains a prolonged period of depolarization, causing the plateau in the action poten-tial. Further, the calcium ions that enter during this plateau phase activate the muscle contractile process, while the calcium ions that cause skeletal muscle con-traction are derived from the intracellular sarcoplas-mic reticulum.

Velocity of Signal Conduction in Cardiac Muscle. The veloci-ty of conduction of the excitatory action potential signal along both atrial and ventricular muscle fibers is about 0.3 to 0.5 m/sec, or about 1/250 the velocity in very large nerve fibers and about 1/10 the velocity in skele-tal muscle fibers. The velocity of conduction in the specialized heart conductive system—in the Purkinjefibers—is as great as 4 m/sec in most parts of thesystem, which allows reasonably rapid conduction of the excitatory signal to the different parts of the heart. 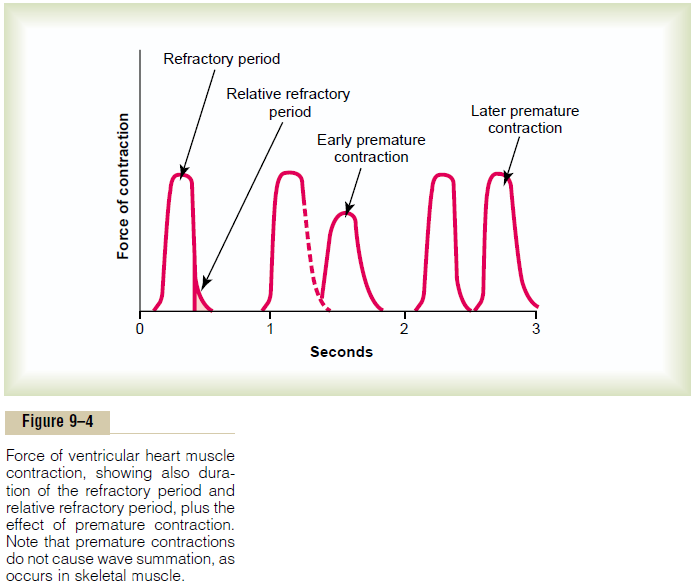 about 0.05 second during which the muscle is more dif-ficult than normal to excite but nevertheless can be excited by a very strong excitatory signal, as demon-strated by the early “premature” contraction in the second example of Figure 9–4. The refractory period of atrial muscle is much shorter than that for the ven-tricles (about 0.15 second for the atria compared with 0.25 to 0.30 second for the ventricles).

Excitation-Contraction Coupling—Function of Calcium Ions and the Transverse Tubules

The term “excitation-contraction coupling” refers to the mechanism by which the action potential causes the myofibrils of muscle to contract. Once again, there are differences in this mechanism in cardiac muscle that have important effects on the characteristics of cardiac muscle contraction.

As is true for skeletal muscle, when an action poten-tial passes over the cardiac muscle membrane, the action potential spreads to the interior of the cardiac muscle fiber along the membranes of the transverse(T) tubules. The T tubule action potentials in turn act on the membranes of the longitudinal sarcoplasmic tubules to cause release of calcium ions into the muscle sarcoplasm from the sarcoplasmic reticulum. In another few thousandths of a second, these calcium ions diffuse into the myofibrils and catalyze the chemi-cal reactions that promote sliding of the actin and myosin filaments along one another; this produces the muscle contraction.

Thus far, this mechanism of excitation-contraction coupling is the same as that for skeletal muscle, but there is a second effect that is quite different. In addi-tion to the calcium ions that are released into the sarcoplasm from the cisternae of the sarcoplasmic reticulum, a large quantity of extra calcium ions also diffuses into the sarcoplasm from the T tubules them-selves at the time of the action potential. Indeed, without this extra calcium from the T tubules, the strength of cardiac muscle contraction would be reduced considerably because the sarcoplasmic re-ticulum of cardiac muscle is less well developed than that of skeletal muscle and does not store enough calcium to provide full contraction. Conversely, the T tubules of cardiac muscle have a diameter 5 times as great as that of the skeletal muscle tubules, which means a volume 25 times as great. Also, inside the T tubules is a large quantity of mucopolysaccharides that are electronegatively charged and bind an abundant store of calcium ions, keeping these always available for diffusion to the interior of the cardiac muscle fiber when a T tubule action potential appears.

At the end of the plateau of the cardiac action potential, the influx of calcium ions to the interior of the muscle fiber is suddenly cut off, and the calcium ions in the sarcoplasm are rapidly pumped back out of the muscle fibers into both the sarcoplasmic reticulum and the T tubule–extracellular fluid space. As a result, the contraction ceases until a new action potential comes along.