(i) Pool Boiling - Pool boiling occurs only when the temperature of the heated surface exceeds the saturation temperature of the liquid. The liquid above the hot surface I s quiescent and its motion n ear the surface is due to free convection. 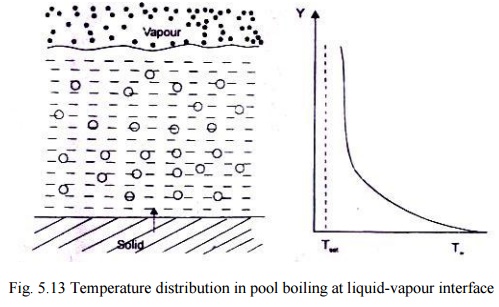 (ii) Nucleate Boiling - Fig. I 1.5 illustrates the different regimes of boiling where the heat flux Q / Ais plotted against the temperature difference (Tw -Ts )When the temperature Tw increases a little more, vapour bubbles are formed at a number of favoured spots on the heating surface. The vapour bubbles are initially small and condense before they reach the free surface. When the temperature is raised further, their number increases and they grow bigger and finally rise to the free surface. This phenomenon is called 'nucleate boiling'. It can be seen from the figure (5.14) that in nucleate boiling regime, the heat flux increases rapidly with increasing surface temperature. In the latter part of the nucleate boiling, (regime 3), heat transfer by evaporation is more important and predominating. The point A on the curve represents 'critical heat flux'. 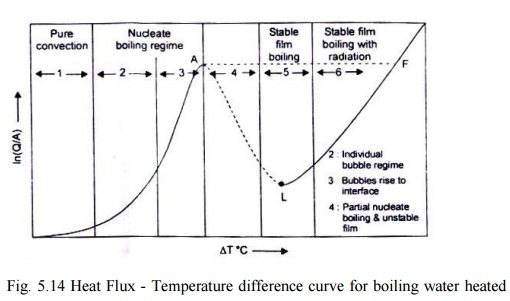 (L is the Laidenfrost Point)

point A, a vapour film forms and covers the entire heating surface. The heat transfer takes place through the vapour which is a poor conductor and this increased thermal resistance causes a drop in the heat flux. This phase is film boiling'. The transition from the nucleate boiling regime to the film boiling regime is not a sharp one and the vapour film under the action of circulating currents collapses and rapidly reforms. In regime 5, the film is stable and the heat flow rate is the lowest.

(iv) Critical Heat Flux and Burnout Point -   For T beyond 550oC (region 6) the temperature of the heating metallic surface is very high and the heat transfer occurs predominantly by radiation, thereby, increasing the heat flux. And finally, a point is reached at which the heating surface melts - point F in Fig. 11.5. It can be observed from the boiling curve that the whole boiling process remains in the unstable state between A and F. Any increase in the heat flux beyond point A will cause a departure from the boiling curve and there would be a large increase in surface temperature.