Heat exchangers are generally classified according to the relative directions of hot and cold fluids:

Heat exchangers are generally classified according to the relative directions of hot and cold fluids:

(a)  Parallel Flow –the hot and cold fluids flow in the same direction. Fig 3.2 depicts such a heat exchanger where one fluid (say hot) flows through the pipe and the other fluid (cold) flows

(a)  (b) Counter Flow –the two fluids flow through the pipe but in opposite directions. A common type of such a heat exchanger is shown in Fig. 3.3. By comparing the temperature distribution of the two types of heat exchanger 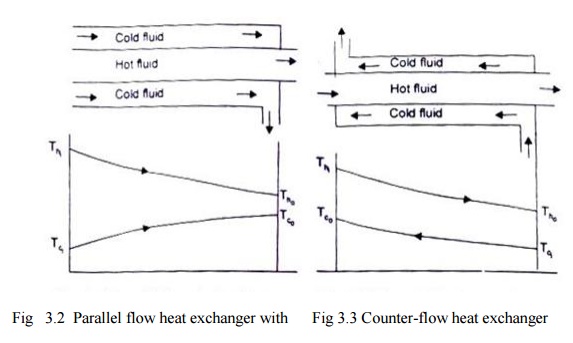 we find that the temperature difference between the two fluids is more uniform in counter flow than in the parallel flow. Counter flow exchangers give the maximum heat transfer rate and are the most favoured devices for heating or cooling of fluids.

When the two fluids flow through the heat exchanger only once, it is called one-shell-pass and one-tube-pass as shown in Fig. 3.2 and 3.3. If the fluid flowing through the tube makes one pass through half of the tube, reverses its direction of flow, and makes a second pass through the remaining half of the tube, it is called 'one-shell-pass, two-tube-pass' heat exchanger,fig 3.4. Many other possible flow arrangements exist and are being used. Fig. 10.5 depicts a 'two-shell-pass, four-tube-pass' exchanger.

(b) Cross-flow - A cross-flow heat exchanger has the two fluid streams flowing at right angles to each other. Fig. 3.6 illustrates such an arrangement An automobile radiator is a good example of cross-flow exchanger. These exchangers are 'mixed' or 'unmixed' depending upon the

(e) Compact Heat Exchangers - these devices have close arrays of finned tubes or plates and are typically used when atleast one of the fluids is a gas. The tubes are either flat or circular as shown in Fig. 10.8 and the fins may be flat or circular. Such heat exchangers are used to a chieve a very large (³700 m2/mJ) heat transfer surface area per unit volume. Flow passages are typically small and the flow is usually laminar. 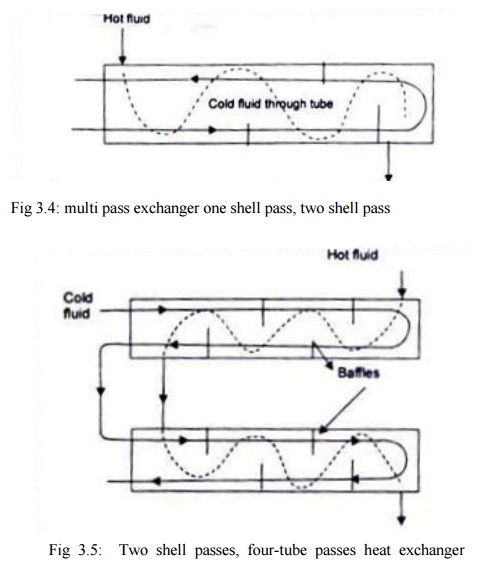 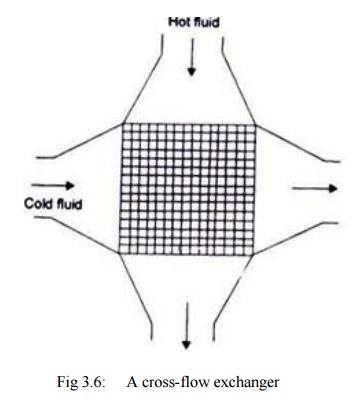 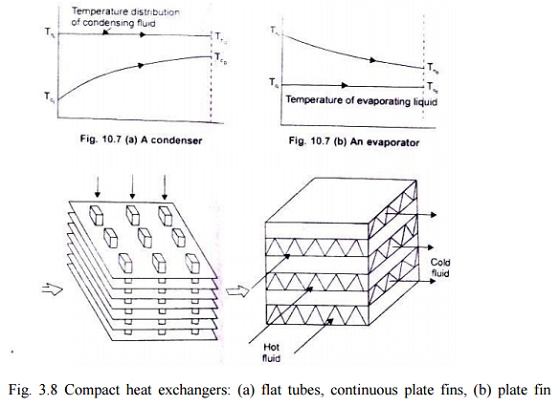