As we saw earlier, the reform movements of the north India had its own impact on Tamilnadu. Brahmo Samaj and Arya Samaj had their branches. Keshab Chandra Sen visited Madras and lectured here.

As we saw earlier, the reform movements of the north India had its own impact on Tamilnadu. Brahmo Samaj and Arya Samaj had their branches. Keshab Chandra Sen visited Madras and lectured here. But Tamilnadu also saw its own reform movements. 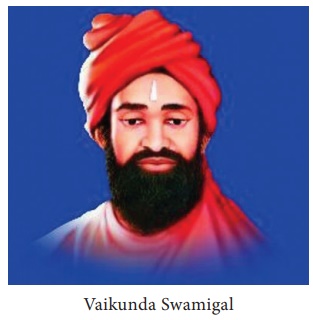 The Sri Vaikunda Swamigal’s cult, which survives to this day, was organized in the 1830s. Born in a poor family (1809) at Sastankoil Vilai (now known as Swamithoppu), a village then in south Travancore (the present day Kanyakumari district), Muthukutti, spent his childhood in the village pial school, learning religious and moral texts. He also learnt the Bible and became well -versed in Christian theology. At the age of twenty two, Muthukutti, cured of a skin disease, after a holy bath in the sea during his visit to the Murugan temple at Tiruchendur (Thoothukudi district), claimed that Lord Vishnu had given him a rebirth as his son. On his return from Tiruchendur, assuming the new name of Sri Vaikundar, he practised austerities for two years. Soon his fame spread far and wide.

In his preaching Vaikundar attacked the traditional caste-ridden Travancore society and its ruler for collecting excessive taxes from the lower caste people. He was arrested and jailed by the Raja of Travancore for his “seditious speeches”. When he was released from jail (1838) he became more popular among the people. His followers called him Aiya (father) and his cult came to be known as Aiya Vazhi (path of the father). His teachings were compiled as a text called Akila Thirattu which is recited religiously to this day.

Vaikunda Swamy instructed his followers to give up worship of pudams. He also exhorted them not to offer animal sacrifices to their deities. He advocated vegetarianism.

As a symbol of protest, Vaikunda Swamy urged his followers to wear a turban, a right which was permitted only to upper castes in those days. As a part of his effort to practice equality, Vaikunda Swamy regularly organized inter-dining through his Samathuva Sangam, among different castes. In his feeding centres called Nilal Tangals, caste-based restrictions were broken down. The Vaikunda Swamy cult posed a serious challenge to the spread of Christianity in south Travancore even after his death in 1851. 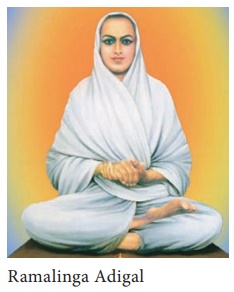 Ramalinga Swamigal was born in a modest family near Chidambaram and spent his early life in Madras. He never had formal schooling, but exhibited great scholarship. Inspired by the Saiva Thevaram and Thiruvasagam hymns, he began to compose moving poems on his own. In his time, Saiva religion was in the grip of Saiva monasteries such as those at Thiruvaduthurai, Dharumapuram and Thiruppanandal. Ramalinga Swamigal’s poems expressed radical ideas and condemned bigotry and irrationality. He underwent certain mystical experiences which he expressed in his poems. This was resented by the orthodox elements in Saiva religion. He established the Sathya Dharma Salai at Vadalur where he began to feed poor people, especially in the context of the 1860s famine and pestilence, irrespective of caste and creed. He founded the Sathya Gnana Sabhai to organize his followers. This brought him into conflict with established Saivite orders, and matters came to a head when his followers published his poems under the title of Thiruvarutpa (Songs of Grace) in 1867. Orthodox Saivites under the Sri Lankan reformer Arumuga Navalar criticized this as blasphemous and launched a tract war. But ultimately, Ramalinga Swamigal’s contribution was recognized and his writings inspired universal ideas, and undermined sectarianism in Saiva religion. 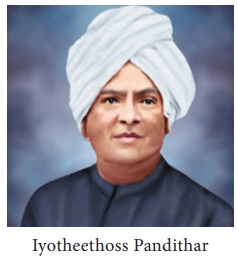 As we saw in an earlier lesson, Buddhism had been practically wiped out in the Tamil country by the beginning of the second millennium. Towards the end of the nineteenth century, there was a revival of Buddhism. The publication of the complete edition of Jeevaka Chintamani (1887) and Manimekalai (1898) were landmarks in the recovery of heterodox traditions.

But the most important figure was Iyotheethoss Pandithar (1845– 1914). A native doctor by profession, he was an erudite scholar. He also came under the influence of Colonel Olcott of the Theosophical Society. In the 1890s he began a movement among the Adi Dravidars arguing that they were the original Buddhists who had been consigned to ‘untouchability’ due to their opposition to Vedic Brahminism. He re-read classical Tamil and other texts to make his case. He also encouraged the conversion to Buddhism. He found the greatest following in north Tamilnadu and among the working classes of the Kolar Gold Fields. In this movement, M. Singavelu and Prof P. Lakshmi Narasu also played an important role. Pandithar ran a weekly journal called Oru Paisa Tamilan (later Tamilan) from 1908 until his death.