The British characterized Indian society in the nineteenth century as being caught in a vicious circle of superstitions and obscurantism.

The British characterized Indian society in the nineteenth century as being caught in a vicious circle of superstitions and obscurantism. In their view idolatry and polytheism reinforced orthodoxy impelling the people to follow them blindly. The social conditions were equally depressing. And the condition of women was deplorable. The practice of sati came in for particular condemnation. The division of society according to birth resulting in the caste system was also criticized. Most importantly, the British argued that without their intervention there was no possibility of deliverance from these evils for Indians. Needless to say, this was a self-serving argument, articulated by missionaries and Utilitarians to justify British rule.

Utilitarians: believers in the doctrine of greatest happiness of the greatest number

India was a much bigger, more complex and diverse country in the early nineteenth century. Conditions varied vastly across it. The social and cultural evils had been fought by Indian reformers through the ages. But the advent of the British with their Enlightenment ideas undoubtedly posed a new challenge. This chapter looks at how social reform movements emerged in various parts of the country.

The development of the Western culture and ideology forced the traditional institutions to revitalize themselves. During the second half of the nineteenth century, the expression of protest and desire for change were articulated through various reform movements. These movements aimed at reforming and democratizing the social institutions and religious outlook of the Indian people. The emergence of new economic forces, spread of education, growth of nationalist sentiment, influence of modern Western thoughts, ideas and culture, and awareness of the changes taking place in Europe strengthened the resolve to reform.

What gave these reform movements an ideological unity were rationalism, religious universalism and humanism. This perspective enabled them to adopt a rational approach to tradition and evaluate the contemporary socio-religious practices from the standpoint of social utility. For example, Raja Rammohun Roy repudiated the infallibility of the Vedas and during the Aligarh Movement, Syed Ahmed Khan emphasized that religious tenets were not immutable. As Keshab Chandra Sen said, ‘Our position is not that truths are to be in all religions, but that all established religions of the World are true.’

These movements enveloping the entire cultural stream of Indian society brought about significant practices in the realms of language, religion, art and philosophy. These reform movements can be broadly classified into two categories:

Both the movements depended in varying degrees on an appeal to the lost purity of religion. The primary difference between them lay in the degree to which they relied on tradition or on reason and conscience. The social reform movements formed an integral part of the religious reforms primarily because all the efforts towards social ills like caste- and gender– based inequality derived legitimacy from religion. Initially, the social reform movement had a narrow social base – they were limited to the upper and middle strata of the society that tried to adjust their modernized views to the existing social reality. From then on, the social reform movements began to percolate to the lower strata of society to reconstruct the social fabric. Heated debates among the intellectuals expressed in the form of public arguments, tracts and journals played a big role in taking new ideas to large sections of the people, as well as to reformulate older ideas in a new form.

At the start, organizations such as the Social Conference, Servants of India and the Christian missionaries were instrumental in giving an impetus to the social reform movements along with many enlightened individuals about whom we dwell on in the following pages. In later years, especially by the twentieth century, the national movement provided the leadership and organization for social reform.

Raja Rammohun Roy, was a man of versatile genius. He established the Brahmo Samaj in August, 1828. The Brahmo Samaj was committed to “the worship and adoration of the eternal, unsearchable, immutable Being who is the Author and Preserver of the Universe”. His long term agenda was to purify Hinduism and to preach monotheism for which he drew authority from the Vedas. He emphasized human dignity, opposed idolatry and social evils such as sati. A retired servant of the East India Company, he was conversant in many languages including Persian and Sanskrit. His ideas and activities were aimed at the political uplift of society through social reform. He was a determined crusader against the inhuman practice of Sati. His tract written in 1818, A Conference Between an Advocate for and an Opponent of the Practice of Burning Widows, cited sacred texts to prove that no religion sanctioned the burning alive of widows. His efforts fructified and the Company through an enactment of law (1829) declared the practice of sati a crime.

1. It denounced polytheism, idol worship, and the faith in divine avatars (incarnations)

2. It condemned the caste system, dogmas and superstitions.

3. It wanted the abolition of child marriage, purdah system and the practice of sati 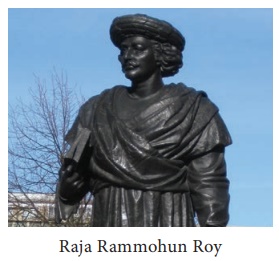 Inspired by the ideals of the French Revolution, Rammohun Roy left for Europe and died in Bristol. After his death there was a steady decline but for the new lease life given to it by Devendranath Tagore (father of Rabindranath Tagore). After him the organization was taken forward by Keshab Chandra Sen from 1857. The strength of the organization is known from the number of branches it had in 1865, 54 Samajas (fifty in Bengal, two in North West Province, one each in Punjab and Madras) . In course of time, the Brahmo Samaj broke into two namely Devendranath Tagore’s, ‘Brahmo Samaj of India’ and Keshub Chandra Sen’s ‘Sadharan Brahmo Samaj’.

In Tamilnadu, Kasi Viswanatha Mudaliar was an adherent of the Samaj and he wrote a play titled Brahmo Samaja Natakam to expound the ideas of the Samaj. He also wrote a tract in support of widow remarriage. In 1864, a Tamil journal titled Tathuva Bodhini was started for the cause of the Brahmo Samaja.

The Brahmo Samaj met with great opposition from orthodox elements in Bengal society such as the Hindu Dharma Sabha. However, there were also reformers such as Ishwarchandra Vidyasagar, who advocated the same ideas but drew on Hindu scriptures as authority.

Even though the Brahmo Samaj did not win many adherents, it had a big impact on the intellectuals. In the early stages, many young men seized of the radical ideas avidly propagated them. Tagore’s family was a Brahmo family and its influence can be seen in his writings and ideas.

An off-shoot of the Brahmo Samaj, the Prarthana Samaj, was founded in 1867 in Bombay by Atmaram Pandurang (1823– 98). The Prarthana Samaj as an organization never had any great influence but its members, like M. G. Ranade (1852-1901), R. G. Bhandarkar, and K.T. Telang, were among the great leaders of nineteenth-century Maharashtra and they became the founders of the social reform movement in later years.

Prarthana Samaj was similar to Brahmo Samaj, but it was consciously linked with the bhakti tradition of the Maharashtrian saints. The Prarathana Samaj continued its work mainly through educational work directed at women and workers at the lower level. It concentrated on social reforms like inter-dining, inter-marriage, remarriage of widows, and uplift of women and depressed classes.

The National Social Conference organized at the initiative of M.G. Ranade met each year immediately after the Indian National Congress (1885) annual sessions. Justice Ranade was an erudite scholar with a keen intellect and under his able guidance the Prarthana Samaj became the active centre of a new social reformation in western India. He was one of the founders of the Widow Marriage Association and was an ardent promoter of the famous Deccan Education Society. Its object was to impart such education to the young as would fit them for the unselfish service of the country. When Ranade died in 1901, his leadership was taken over by Chandavarkar. 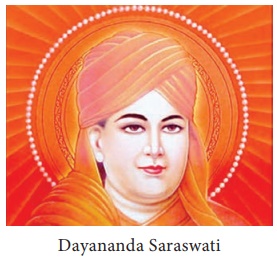 The founder of the Arya Samaj was Dayananda Saraswati (1824–83). Dayananda, a Gujarati, left home in his youth to become an ascetic. For seventeen years he wandered around India. In 1863 he became a wandering preacher, and five years later he added the establishment of schools to his activities. In 1872 he met the Brahmos in Calcutta. In 1875 he founded the Arya Samaj and published his major work the Satyarth Prakash. In his view, contemporary Hinduism had become degenerate. Therefore he rejected puranas, polytheism, idolatry, the role of Brahmin priests, pilgrimages, many rituals and the prohibition on widow marriage. As a good Sanskrit scholar, he made a call to“Back to the Vedas”. He wanted to shape society on the basis of the Vedas. He disregarded the puranas. Like the other social reformers, he encouraged female education and remarriage of widows.

Swami Dayananda’s sphere of influence was largely in the Punjab region where the trading community of Khatris experienced great mobility in colonial times. However, in the Punjab region, there was much communal conflict among Hindus, Muslims and Sikhs. Dayananda’s Shuddi (purification) movement i.e., conversion of non-Hindus to Hindus was controversial and provoked controversies especially with the Ahmadiya movement.

Arya Samaj is considered to be a revivalist movement. Dayananda’s influence continued into the twentieth century through the establishment of Dayananad Anglo Vedic (DAV) schools and colleges.

As we saw above, the early reform movements in Bengal were radical, questioning and criticising tradition very strongly. In response to this emerged the Ramakrishna Mission as an important religious movement. Ramakrishna Paramahamsa (1836–1886), a poor priest in a temple at Dakshineswar near Kolkata, had no formal education but led an intense spiritual life. He had a deep faith in the inherent truth of all religions and tested its belief by performing religious service in accordance with the practices of different religions. According to him ‘all the religious views are but different ways to lead to the same goal.’ In a backlash, the later generation of Western educated intellectuals were drawn to Ramakrishna’s broad view, mysticism and spiritual fervour. He expounded his views in short stories and admirable parables which were compiled by an admirer as Ramakrishna Kathamrita (The Gospel of Sri Ramakrishna). 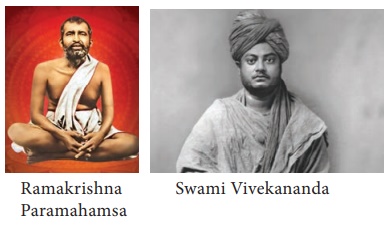 The most famous among his disciples was a young graduate of the Calcutta University named Narendranath Dutta, afterwards famously called Swami Vivekananda(1863–1902). Emphasising practical work over philosophizing he established the modern institution of the Ramakrishna Mission. He carried Ramakrishna’s message all over India and the world. His learning, eloquence, spiritual fervour and personality gathered round him a band of followers across the country, many of whom also joined the national movement. He attended in 1893 the famous, ‘Parliament of Religions’ at Chicago, and made a deep impact on those congregated there. The Mission opened schools, dispensaries and orphanages and helped people during their time of distress caused by calamities.

Swami Vivekananda was a personification of youth and boldness and referred to as the Morning Star of the Modern India. In the words of Valentine Chirol, ‘the first Hindu whose personality won demonstrative recognition abroad for India’s ancient civilization and for her newborn claim to nationhood.’

Even as Indian intellectuals felt challenged by western Enlightenment and rationalistic movements, there was a strain of thinking in the West which looked to the East for spiritual salvation. From this idea emerged the Theosophical Society, founded by Madam H.P. Blavatsky and Colonel H.S. Olcott in the United States of America in 1875. They came to India in 1879 and established their headquarters at Adyar in 1886. Under the leadership of Annie Besant, who came to India in 1893, the Theosophical Society gathered strength and won many adherents. The Theosophical Society started associations across south India. Though involved in many controversies, the Society played an important role in the revival of Buddhism in India. Iyotheethoss Pandithar, the radical Dalit thinker, was introduced to modern Buddhism through his interaction with Colonel Olcott who took him to Sri Lanka. There he met many Buddhist monks including the renowned revivalist Anagarika Dharmapala and Acharya Sumangala.