The Revolt of 1857 and its brutal suppression by the British had an adverse impact on the Muslims of South Asia.

The Revolt of 1857 and its brutal suppression by the British had an adverse impact on the Muslims of South Asia. While they were viewed with suspicion by the British for the 1857 insurgency, the Muslims themselves withdrew into a shell and did not use the opportunities opened up by colonial modernity. Consequently, they lagged behind in education and attendant employment opportunities. In this context, a few decades later some reform movements emerged among the Muslims. 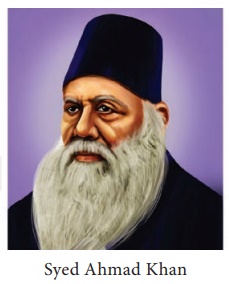 Aligarh Movement was started by Syed Ahmad Khan in 1875. He wanted to reconcile Western scientific education with the teachings of the Quran. The Aligarh movement aimed at spreading (i) Modern education among Indian Muslims without weakening their allegiance to Islam, and (ii) Social reforms among Muslims relating to purdah, polygamy, and divorce.

Syed’s progressive social ideas were propagated through his magazine Tahdhib-ul-Akhluq (Improvement of Manners and Morals). Syed Ahmad Khan’s educational programme emphasized from the outset the advantages of the use of English as the medium of instruction. In 1864 he founded a Scientific Society of Aligarh for the introduction of Western sciences through translations into Urdu of works on physical sciences. The same year he founded a modern school at Ghazipur. In 1868 he promoted the formation of education committees in several districts, to initiate modern education among the Muslims.

During his visit to Europe in 1869–70 he developed the plans of his life -work, a major educational institution for Indian Muslims. In order to promote English education among the Muslims, he founded in 1875 a modern school at Aligarh, which soon developed into the Muhammdan Anglo–Oriental College (1877). This college was to become the Muslim University after his death. It became the nursery of Muslim political and intellectual leaders.

In 1886 Syed Ahmad Khan founded the Muhammedan Anglo Oriental Educational Conference as a general forum for spreading liberal ideas among the Indian Muslims. He rejected blind adherence to religious law and asked for a reinterpretation of the Quran in the light of reason to suit the new trends of the time. He attempted to liberalize Indian Islam and made it amenable to new ideas and new interpretations. In this mission he had to face the brunt of vehement attacks of orthodox theologians.

The Ahmadiya movement founded by Mirza Ghulam Ahmed (1835–1908) in 1889 established a different trend. While emphasizing the return to the original principles enunciated in the Quran, Ghulam Ahmed became controversial when he claimed to be a Messiah, which was considered heretical by mainstream Islam. But he won many converts. His primary work was to defend Islam against the polemics of the Arya Samaj and the Christian missionaries. In social morals the Ahmadiya movement was conservative, adhering to polygamy, veiling of women, and the classical rules of divorce.

The Deoband movement was organised by the orthodox section among the Muslim ulemas as a revivalist movement with the twin objective of propagating the pure teachings of the Quran and Hadis among Muslims. The movement was established in Deoband in Saranpur district (by Mohammad Qasim Nanotavi (1833-1877) and Rashid Ahmed Gangohi (1828–1905) to train religious leaders for the Muslim community. In contrast to the Aligarh Movement, which aimed at the welfare of Muslims through Western education and support of the British Government, the aim of the Deoband Movement was religious regeneration of the Muslim community. The instruction imparted at Deoband adhered to classical Islamic tradition.

The seminary at Deoband was founded in 1867 by theologians of the School of Wali-Allah. Muhammad Qasim Nanotavi took a prominent part in counter-polemics against the Christian missionaries and the Arya Samajists. The principal objectives of the seminary at Deoband were to re-establish contact between the theologians and the educated Muslim middle classes, and to revive the study of Muslim religious and scholastic sciences. As a religious university Deoband soon became an honoured institution, not only in Muslim India but also in the world of Islam at large.

A school less conservative than Deoband and more responsive to the demands of the modern age was the Nadwat al-‘ulama,’ founded in 1894 at Lucknow by the historian Shibli Nu‘mani and other scholars. The school aimed to offer an enlightened interpretation of religion in order to fight the trends of agnosticism and atheism which had followed the advent of modern Western education.

The third famous traditional school is the much older one at Farangi Mahal in Lucknow. Farangi Mahal accepted Sufism as a valid experience and a valid field of study. Another traditionalist movement was the ahl-i-hadith or of the followers of the dicta of the Prophet.