First we shall recall how the real number system was developed. We start with natural numbers N.

First we shall recall how the real number system was developed. We start with natural numbers N.

We have seen in earlier classes that rational numbers are precisely the set of terminating or infinite periodic decimals. For example,

Have we filled the whole line with rational numbers?

The answer to the above question is “No” as the following consideration demonstrates. Consider a square whose side has length 1 unit. Then by Pythagoras theorem its diagonal has length √2 units. 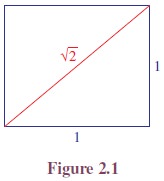 Proof. Suppose that √2 is a rational number. Let √2 = m /n , where m and n are positive integers with no common factors greater than 1. Then, we have m2 = 2n2, which implies that m2 is even and hence m is even.

Thus, n is also even.

It follows, that m and n are even numbers having a common factor 2.

Thus, we arrived at a contradiction.

Hence, √2 is an irrational number.

(i) Note that in the above proof we have assumed the contrary of what we wanted to prove and arrived at a contradiction. This method of proof is called ‘proof by contradiction’.

(ii) There are points on the number line that are not represented by rational numbers.

Figure 2.2 demonstrates how the square roots of 2 and 3 can be identified on a number line. 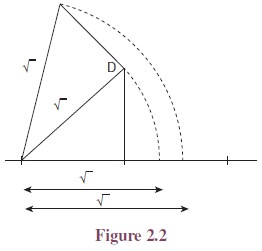 As we have already observed, irrational numbers occur in real life situations. Over 2000 years ago people in the Orient and Egypt observed that the ratio of the circumference to the diameter is the same for any circle. This constant was proved to be an irrational number by Johann Heinrich Lambert in 1767. The value of π rounded off to nine decimal places is equal to 3.141592654. The values 22/7 and 3.14, used in calculations, such as area of a circle or volume of a sphere, are only approximate values for π.

The number π, which is the ratio of the circumference of a circle to its diameter, is an irrational number.

Now let us recall the properties of the real number system which is the foundation for mathematics.

[While adding (or multiplying) finite number of real numbers, we can add (or multiply) by grouping them in any order.]