A ROM is essentially a memory device in which permanent binary information is stored.

A ROM is essentially a memory device in which permanent binary information is stored.

The inputs provide the address for memory and the outputs give the data bits of the stored word that is selected by the address. The number of words in a ROM is determined from the fact that k address input lines are needed to specify 2k words. 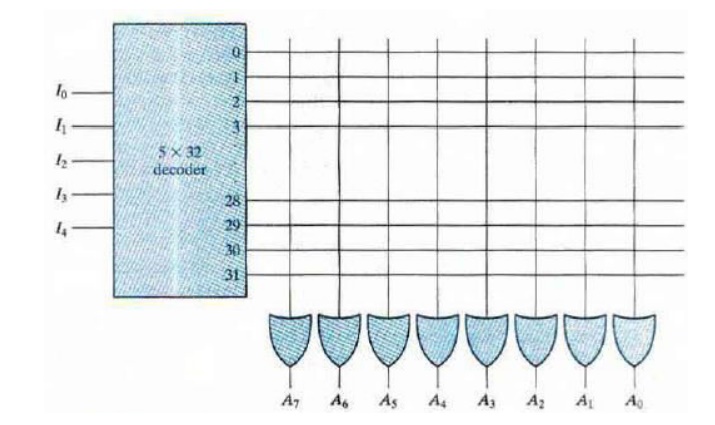 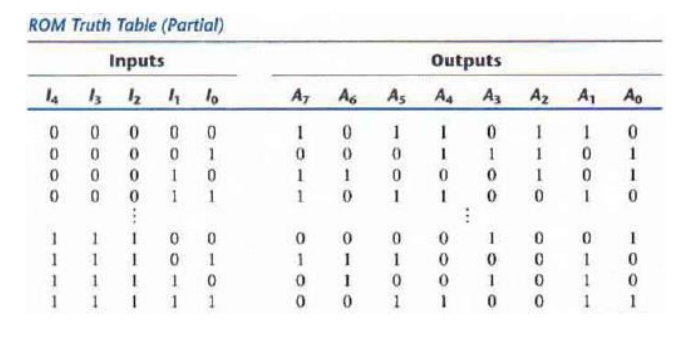 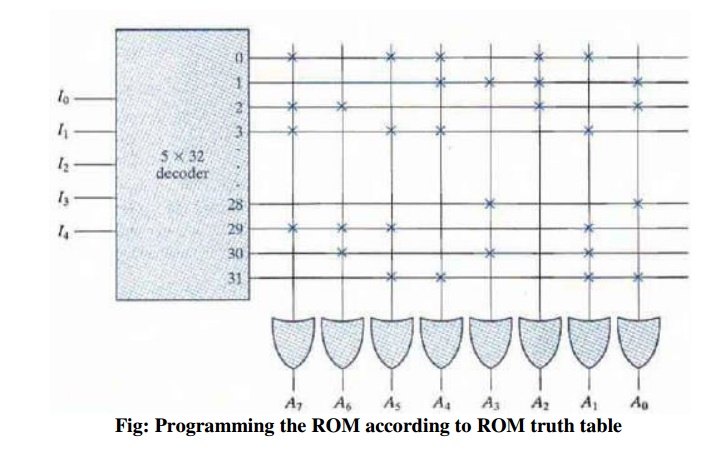 The required paths in a ROM may be programmed in four different ways.

ü    The first is called mask programming and is done by the semiconductor company during the last fabrication process of the unit. This procedure is costly because the vendor charges the customer a special fee for custom masking the particular ROM.

ü    For small quantities, it is more economical to use a second type of ROM called programmable read-only memory- PROM. The fuses in the PROM are blown by the application of a high-voltage pulse to the device through a special pin. A blown fuse defines a binary 0 state and an intact fuse gives a binary 1 state. The hardware procedure for programming ROMs or PROMs is irreversible and once programmed, the fixed pattern is permanent and cannot be altered.

ü    A third type of R OM is the erasable PROM or EPROM, which can be restructured to the initial state even though it has been programmed previously. When the EPROM is placed under a special ultraviolet light for a given length of time. the shortwave radiation discharges the intern al floating gates that serve as the programmed connections. After erasure, the EPROM returns to its initial state and can be reprogrammed to a new set of values.

The fourth type of ROM is the electrically erasable PROM (EEPROM or E2PROM). This device is like the EPROM except that the previously programmed connections can be erased with an electrical signal instead of ultraviolet light. The advantage is that the device can be erased without removing it from its socket.

ü Flash memory devices are similar to EEPROMs, but have additional built-in circuitry to selectively program and erase the device in-circuit, without the need for a special programmer. They have widespread application in modern technology in cell phones, digital cameras, set-top boxes, digital TV, telecommunications, non volatile data storage and microcontrollers. Their low consumption of power makes them an attractive storage medium for laptop and notebook computers.

The PROM is a combinational programmable logic device (PLD)-an integrated circuit with programmable gates divided into an AND array and an OR array to provide an AND-OR sum of-product implementation.

ü    There are three major types of combinational PLDs, differing in the placement of the programmable connections in the AND-OR array.

The PAL has a programmable AND array and a fixed OR array. The AND gates are programmed to provide the product terms for the Boolean functions, which are logically summed in each OR gate.

The most flexible PLD is the PLA, in which both the AND and OR arrays can be programmed. The product terms in the AND array may be shared by any OR gate to provide the required sum-of-products implementation.