A memory unit stores binary information in groups of bits called words. A word in memory is an entity of bits that move in and out of storage as a unit. A memory word is a group of 1 's and 0's and may represent a number, an instruction , one or more alphanumeric characters or any other binary-coded information. A group of 8 bits is called a byte. Most computer memories use words that are multiples of 8 bits in length.

Each word in memory is assigned an identification number called an address starting from 0 upto 2k-1. where k is the number of address lines. Consider for example, a memory unit with a capacity of 1K words of 16 bits each. Since 1K=1024 = 210 and 16 bits constitute two bytes, we can say that the memory can accommodate 2048 = 2K bytes. 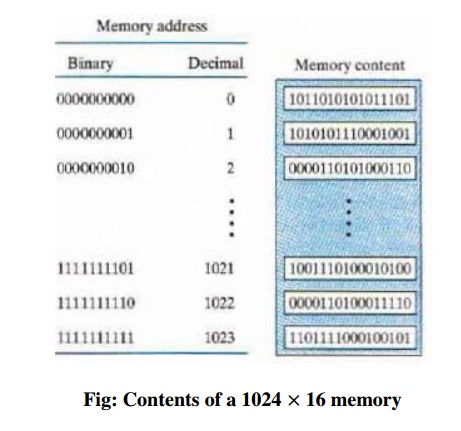 Read and write operations- The two operations that RAM can perform are the write and read operations. The steps that must be taken for the purpose of transferring a new word to be stored into memory are as follows:

·        Apply the data bits that must be stored in memory to the data input lines.

The memory unit will then take the bits from the input data lines and store them in the word specified by the address lines. The steps that must be taken for the purpose of transferring a stored word out of memory are as follows:

·       Apply the binary address of the desired word to the address lines.

The operation of the memory unit is controlled by an external device such as a central processing unit (CPU). The CPU is usually synchronized by its own clock .The memory however doesn’temploy an internal clock. Instead it’sread and write operations are specified by control inputs. 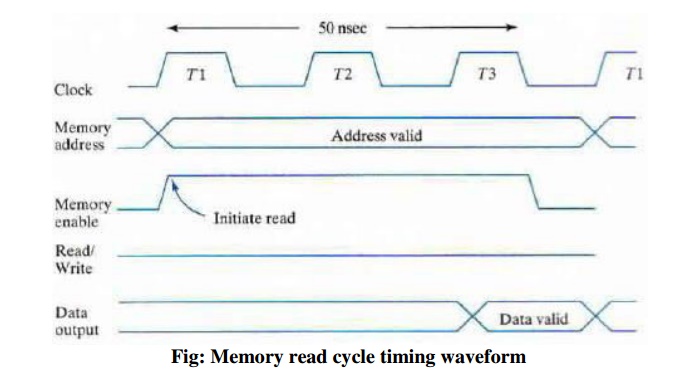 The read cycle shown in figure has an address for the memory provided by the CPU. The memory-enable and read/write signals must be in their high level for a read operation. The memory places the data of the word selected by the address into the output data lines within a 50-ns interval (or less) from the time that the memory enable is activated. The CPU can transfer the data into one of its internal registers during the negative transition of T3.The next T1 cycle is available for another memory request. 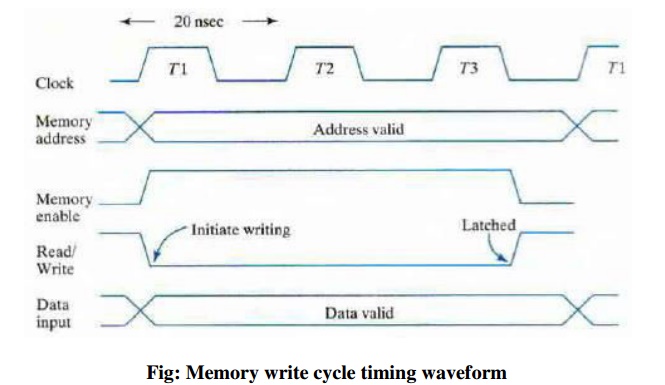 For a write operation, the CPU must provide the address and input data to the memory. This is done at the beginning of TI. The memory enable and the read/write signals must be activated after the signals in the address lines are stable in order to avoid destroying data in other memory words.

The memory enable signal switches to the high level and the read/write signal switches to the low level to indicate a write operation. The two control signals must stay active for at least 50 ns. The address and data signals must remain stable for a short time after the control signals are deactivated. At the completion of the third clock cycle, the memory write operation is completed and the CPU can access the memory again with the next TI cycle.

Integrated circuit RAM units are available in two operating modes: static and dynamic. Static RAM (SRAM) consists essentially of internal latches that store the binary information. The stored information remains valid as long as power is applied to the unit. Dynamic RAM (DRAM) stores the binary information in the form of electric charges on capacitors provided inside the chip by MOS transistors.

The stored charge on the capacitors tends to discharge with time, and the capacitors must be periodically recharged by refreshing the dynamic memory. Refreshing is done by cycling through the words every few milliseconds to restore the decaying charge. DRAM offers reduced power consumption and larger storage capacity in a single memory chip. SRAM is easier to use and has shorter read and write cycles.

that will be needed again after the computer is turned on. Programs and data that cannot be altered are stored in ROM, while other large programs are maintained on magnetic disk.